One Hundred Years of Solitude by Gabriel García Márquez 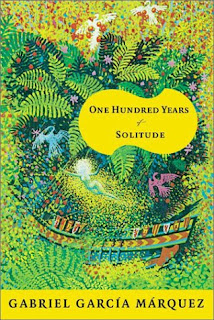 Many years later, as he faced the firing squad, Colonel Aureliano Buendia was to remember that distant afternoon when his father took him to discover ice. ~ Opening line

This is the first time I’ve read One Hundred Years of Solitude or Gabriel García Márquez. When I began this quest, there were eight living authors on my list. Now there are only seven. Gabriel García Márquez passed away in April 2014; may he rest in peace. The novel is of the magical realism genre set in the fictional South American country of Macondo, which is almost certainly a metaphor for Colombia. As you might guess, the novel covers 100 years in the postcolonial era, in this case from the 1820s to 1920s. It is considered a seminal work in Latin American literature. Some have said that One Hundred Years of Solitude is to Latin America, what Don Quixote is to Spain.

This novel satisfies square B5 of 2015 Classics Bingo: winner of a foreign literary prize. García Márquez won the 1972 Neustadt International Prize for Literature and the 1982 Nobel Prize in Literature.

The patriarch, and founder of Macondo, José Arcadio Buendía, marries his cousin Ursula, and they have two sons: José Arcadio, and Colonel Aureliano Buendía as well as a daughter, Amaranta, who never marries or has children. Subsequent generations who bore variations of the José Arcadio name were somewhat impulsive and of great stature and strength, while Aurelianos were typically more introspective, deliberate, and a bit less physically imposing. The one anomaly in this pattern is a set of twins: José Arcadio Segundo and Aureliano Segundo. Early in life they mischievously trade places to confuse others. When they are older they exhibit characteristics of the opposite namesake, and Ursula believes they changed roles so often they confused themselves and actually assumed the wrong names. Ironically, after they die on the same day, probably the same instant, there is a mix-up at the funeral and they are buried in the other’s grave…which if Ursula was correct…actually set things right.

That’s just one sample of the fantastic elements of the story. Other elements were odd, but not completely implausible such as a room that was shut for years, but once opened was found without dust or cobwebs and with fresh, clean air. Other events were completely miraculous such as a young woman, of unequalled beauty, who simply floated into heaven one day while folding sheets, never to be seen again. Throughout the story characters frequently have conversations with the ghosts of deceased family members as if it is perfectly natural.

As you might imagine 100 years and seven generations provides the setting for numerous themes. One stood out: solitude. García Márquez uses the word “solitude” repeatedly, far too many times to be accidental. It was obviously deliberate, and although I didn’t keep track, I suspect he used it in some context to describe every major character; I know he used it for most.

Colonel Aureliano Buendía could understand only that the secret of a good old age is simply an honorable pact with solitude.

The Buendía family members were rather self-absorbed, not utterly unsympathetic toward others, but usually unaware that anyone else might have dreams, passions, desires, or needs.

And then there was Macondo, isolated from the rest of the country, physically cut off for much of the story, and figuratively distinct throughout.

The cycle of solitude seems to be broken near the end. One couple seems to find true love; that alone was exceptional. They also see the struggles of other family members and work to help

they lamented that it had cost them so much of their lives to find the paradise of shared solitude.

Happily, this exception is passed on to the next generation, but then, fatalism again intervenes.

And finally, there is a surprise dramatic ending.

I am ignorant of Colombian history, so where the story serves as metaphor, I’m certain I missed it. As simply a story, it was quite enjoyable. The Buendía family members were hopelessly flawed, often pitiable, sometimes lovable, seldom despicable, and highly amusing. They were each one solitary and at times, their own worst enemies. The story necessarily moves quickly, covering 100 years, and doesn’t get bogged down in details. It was in a word, interesting. If it is to be compared to Don Quixote, I liked One Hundred Years of Solitude much better.

…because races condemned to one hundred years of solitude did not have a second opportunity on earth.