I began this quest on August 16, 2011 and completed it June 30, 2018, meaning it took me 2510 days from the first page of The Great Gatsby, to the last page of The Hitchhiker’s Guide to the Galaxy. The longest amount of time I spent on one book was 140 days for Ulysses; the shortest was a few hours to read The Call of the Wild, and the average was 23 days per novel.

The longest book was Remembrance of Things Past by Marcel Proust. The Guinness Book of World Records recognizes this as the world’s longest novel, based on character count, with over 9.6 million characters. My version was 3365 pages. The shortest novel, by page count, was The Call of the Wild at 84. The combined page count of all 100 novels was 55,582 pages, or an average of 555 pages.

William Faulkner and Henry James each had four novels. There were 11 authors with two:  Jane Austen, Joseph Conrad, Charles Dickens, Fyodor Dostoevsky, Ernest Hemingway, James Joyce, George Orwell, Ayn Rand, Leo Tolstoy, Evelyn Waugh, and Virginia Woolf. These 13 authors accounted for 30% of the list. Although he did not have the most novels, George Orwell has perhaps the greatest distinction with two novels in the Top Seven.

There were 11 authors who worked in intelligence. I mention this, because that is my career field and I hope to follow their career path to author one day. The authors with roots in intelligence are: W. Somerset Maugham (British WWI); Muriel Spark, Evelyn Waugh, Graham Greene, Anthony Burgess, and Anthony Powell (British WWII); Kurt Vonnegut, J.D. Salinger, and Thornton Wilder (U.S. WWII); Ernest Hemingway (unproven, Russia WWII), and John Steinbeck (unproven, U.S. Cold War).

My trophy case: Pictured here are the 100 Greatest Novels. I read mostly from  ebooks, but I have a hardcover tree book for all 100. Some used some new. (six shelves on the left, plus the top shelf on the right) 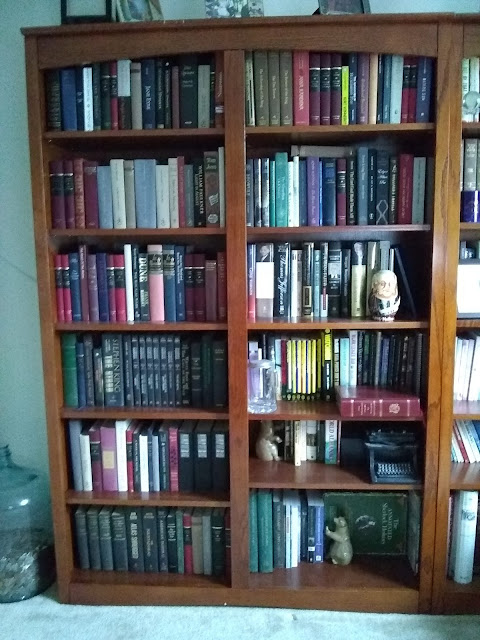 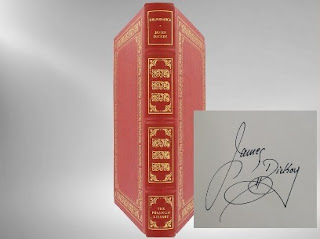 Covers: These do not always represent the version I read, but rather covers that I thought were emblematic of the story. 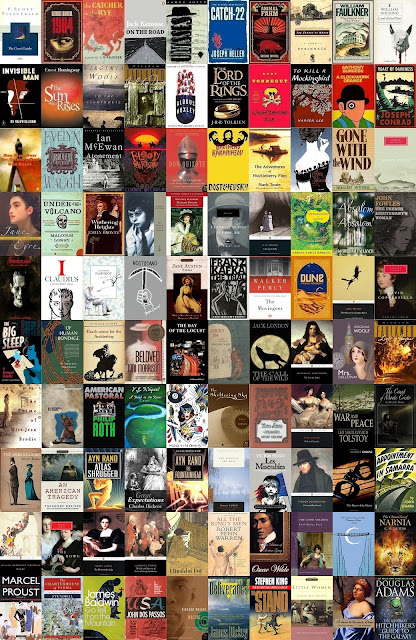 Ratings: Upon completing this quest, I went back and changed a few of my early ratings. I was a bit unfair to some early reads as I didn’t have a broad base for comparison. Still, there were only four that I changed:  Ulysses from 1.5 to 2.5 stars, On the Road from 1.5 to 2 stars, and The Great Gatsby and The Catcher in the Rye from 3 to 3.5 stars.

Regarding these ratings, they are NOT commentary on the “Greatness” of these works, rather they simply reflect my personal enjoyment of the read – very opinionated. Secondly, in order to differentiate amongst a group that are all considered “Great”, I set the bar VERY HIGH for 5 or even 4 stars. 3.5 is above the median, so still a good rating. If you plot my ratings on a graph, the result is a fairly standard bell curve, which suggests consistent rating. 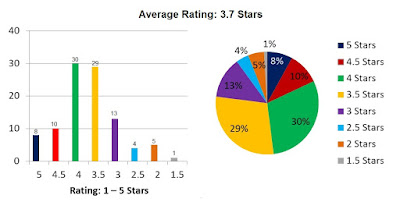 And now a few distinctions:

Top 10 Favorites (in order, starting with #1 most favored):
To Kill a Mockingbird
The Lord of the Rings
Gone With the Wind
The Count of Monte Cristo
The Chronicles of Narnia
Lord of the Flies
The Grapes of Wrath
David Copperfield
Atlas Shrugged
The Stand
Deliverance

Top 10 Dislikes (in order, starting with #1 most disliked)
Remembrance of Things Past
On the Road
Money
The Ambassadors
The Golden Bowl
The Good Soldier
Ulysses
The Sun Also Rises
To the Lighthouse
The Wings of the Dove

Most Surprising:
One Hundred Years of Solitude – read it

Most Underappreciated:
Invisible Man – ought to be required reading
The Heart is a Lonely Hunter – beautiful and powerful

Most Overrated:
On the Road – ugh!

Most Unexpected Ending:
The Heart is a Lonely Hunter

Least Satisfying Ending:
A Clockwork Orange – but only the post 1986 editions, with the “additional chapter” that Burgess preferred. Not me!

A World is supported by four things…the learning of the wise, the justice of the great, the prayers of the righteous and the valor of the brave. But all of these are as nothing…without a ruler who knows the art of ruling.~ Dune

…for the wicked are not so easily disposed of, for God seems to have them under his special watch-care to make of them instruments of his vengeance.  ~ The Count of Monte Cristo

I wanted you to see what real courage is, instead of getting the idea that courage is a man with a gun in his hand. It’s when you know you’re licked before you begin but you begin anyway and you see it through no matter what.~ Atticus Finch – To Kill a Mockingbird

They aim at justice, but denying Christ, they will end by flooding the earth with blood.~ Father Zosima – The Brothers Karamazov

Whatever else is unsure in this stinking dunghill of a world a mother’s love is not.~ A Portrait of the Artist as a Young Man

Mrs. Poulteney believed in a God that had never existed; and Sarah knew a God that did. ~ The French Lieutenant’s Woman

All he did was smile and say, “Take care of yourself, Denver.” But she heard it as though it were what language was made for.~ Beloved

Many years later, as he faced the firing squad, Colonel Aureliano Buendia was to remember that distant afternoon when his father took him to discover ice.~ Opening line from One-Hundred Years of Solitude.

I chuckled over it from time to time for the whole rest of the day. Because it does look very funny, you know, to see a black and white cow land on its back in the middle of a stream. It is so just exactly what one doesn’t expect of a cow.~ John Dowell – The Good Soldier

Now what? I will continue reading and blogging, but I’ll expand to other categories of literature. I have TBR lists for: Short Stories; Plays; Epic Poems; Poetry; Tales, Myths, and Legends; Graphic Novels; Tolkien; Shakespeare; Sherlock Holmes, and Biographies, as well as over 1200 more novels. I might even occasionally read something not on any of these lists which could inspire me to create a new list. I love lists. By the way a lover of lists is an albumiphile – a term I created. You read it here first.

Quite obviously, I won’t finish my TBR in this lifetime. I have no idea what the Heavenly library is like, so I make no promise for the next. There are a few authors I hope to talk to though.

And finally...here are the 100 Novels (reviews in orange hyperlink)