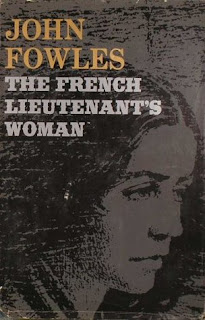 We all write poems; it is simply that poets are the ones who write in words.

This is the first time I’ve read The French Lieutenant’s Woman or John Fowles. The book is a third-person narrative, and although it is a post-modern novel, published in 1969, it reads more like a Victorian era romance. This is no accident; the narrator makes repeated references to Victorian mores and makes it clear he is looking backwards in time, from his own post-modern vantage point, to the Victorian era. This is only one of several unusual techniques Fowles employs.

This novel satisfies square B4 of 2015 Classics Bingo: Romance Classic.

For starters, it was captivating. I read the final 200 pages in a single setting. Second, it was quite unpredictable. At several points, I was certain I knew where things were going, and I was wildly off the mark. Third, it challenged me: intellectually, emotionally, and morally.

The story takes place in the coastal British village of Lyme Regis, 1867, a long-time home of the author. The protagonist, Sarah Woodruff, is known to the villagers as the French lieutenant’s whore. She is also known as Tragedy, for the heartbreak and disgrace she suffered by the unscrupulous French sailor who was briefly stranded in the village. The villagers believe Sarah is heartbroken, hoping for the lieutenant's return, and perhaps a little mad. None of which is true, except just perhaps, the madness, though she is quite lucid and highly intelligent.

The title is a bit of a misnomer in my opinion, not because it uses a more delicate description of Sarah, but because the lieutenant is only a memory. The love affair in this novel is between Sarah and English gentleman Charles Smithson. Charles encounters Sarah when visiting Lyme Regis with his fiancé, Ernistina Freeman. And now the conflict is obvious, but only the very tip.

Charles is in conflict before he ever lays eyes on Sarah, though she brings his discontent into sharper focus. His fiancé is pretty, sensitive, sweet, wealthy, not terribly spoiled or vain, but she is not Charles' intellectual equal.

This gives only the slightest glimpse of the turmoil pulling at Charles. He is something of an amateur naturalist and espouses the evolutionary theories of Darwin. This is allegorical to one of Charles greatest recurring dilemmas: he feels trapped in the roles and duties of an English gentleman. Both the narrator and Charles wonder from time to time, if the aristocracy is not doomed…that natural selection will not winnow them out to be replaced by fitter, more productive men of action and ability. Charles feels the urge to change, to evolve, but he feels restrained by the customs of English nobility.

He is, as you might guess also agnostic, but his life reaches such crises, he resorts to prayer on several desperate occasions.

As the reader, I was conflicted on more than one issue. Early on, the reader learns to love Sarah. She needs mercy and compassion from her fellow villagers, and they give her scorn and disgust. She bears it with humility and grace. The reader learns what an elegant mind, compassionate soul, and incorrupt spirit she possesses, and sees what a perfect match she and Charles would make. But remember, Charles is promised, and to no unworthy shrew. And yet, Sarah pursues him. Where now is her compassionate soul and incorrupt spirit? I was torn between wishing for the match, and wishing for Charles to do the right thing, flee from Sarah and honor Ernistina.

There were practical impediments as well. It is hard to imagine today, but it was nearly impossible for a gentleman like Charles to marry a peasant girl, let alone one with dubious past. This is where Fowles’ backwards look from postmodernism entered the narrative.

Fowles also employed an unusual technique of providing alternate endings. Although this is not unheard of, he made it a little extra unusual with three alternates: one sterile, one blissful, and one dismal. I don’t like it when authors do this. I want to know what really happened.

Which is kind of funny…it is fiction after all.

And one more technique, Fowles injects himself, the narrator/author into the story. He rides in a train compartment with Charles and studies him while he sleeps, trying to determine – as the author – what Charles will do. Fowles eventually flips a coin, not to decide which path, but to decide which alternate ending to narrate first…conceding the reader will tend to remember the last and conclude it is the “real” ending.

Overall, I liked The French Lieutenant's Woman for challenging my thoughts and emotions. I was quite hooked; I couldn’t put it down in the end.

The novel is filled with references to classic literature, such as:
Louisa Musgrove from Persuasion
Becky Sharp from Vanity Fair
Sam Weller from The Pickwick Papers
Sancho Panza from Don Quixote
Homer author of The Iliad and The Odyssey
Starving heroines lying huddled on snow-covered door steps – undoubtedly refers to Jane from Jane Eyre
Lying fevered in some bare, leaking garret – help me out, I don’t know
Madame Bovary
Uriah Heep from David Copperfield
Dr. Jekyll and Mr. Hyde
Jude the Obscure by Thomas Hardy…and many, many more references to Hardy
I’m sure there were others I missed.

So the rarest flower, forgiveness, was given a precarious footing in Marlborough House….

Mrs. Poultney believed in a God that had never existed; and Sarah knew a God that did.

His statement to himself should have been, “I possess this now, therefore I am happy,” instead of what it so Victorianly was: “I cannot possess this forever, and therefore am sad.”

His listener felt needed, and a girl who feels needed is already a quarter way in love.

Old doctors and old priests share one thing in common: they get a long nose for deceit.

Narrative describing a scene when Sarah is weeping alone in her room, and note the question mark after the second sentence: Two moments later she was kneeling by her bed and weeping silently into the worn cover. She should rather have prayed? But she believed she was praying.

Narrative regarding Charles impression of a pair of Americans he meets: They were not the stupid Yankees the Victorian British liked to suppose were universal in the States.

Comment by one of the Americans: In general back home we say what we think. My impression of London was – forgive me, Mr. Smithson – heaven help you if you don’t say what you don’t think.

Narrative regarding Charles thoughts on America: …he even glimpsed, though very dimly and only by virtue of a Darwinian analogy, that one day America might supersede the older species.

Film Rendition: 1981 version Starring Meryl Streep as Sarah and Jeremy Irons as Charles, was nominated for four Academy Awards (Best Actress for Streep and Best Adapted Screenplay, et al). I didn’t love the film. It was a fairly faithful rendition, but in spite of Streep’s nomination for the Oscar, and winning the Golden Globe, I didn’t care for her as Sarah. I’m probably prejudiced; my mental image of Sarah did not resemble Streep.