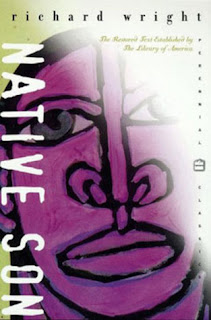 Of all things, men do not like to feel that they are guilty of wrong, and if you make them fell guilt, they will try desperately to justify it on any grounds; but, failing that, and seeing no immediate solution that will set things right without too much cost to their lives and property, they will kill that which evoked in them the condemning sense of guilt. ~ Boris Max, Lawyer for the defense

Native Son is the story of Bigger Thomas, an African-American man living in the South side of Chicago, 1930s. I knew this was another story about the racial divide in America and was expecting something like Invisible Man or Go Tell it on the Mountain.

But no, this was quite different, and much more troubling.

Bigger lives in poverty with his mother, younger brother, and younger sister – no father in the picture.

He hated his family because he knew that they were suffering and that he was powerless to help them.

Bigger is a petty criminal and a bit of an idler. However, social services arrange a job as chauffer for a wealthy white family, and maybe Bigger has a chance, until the naiveté and recklessness of the privileged do-gooder daughter leads Bigger into a catastrophically compromising situation. Bigger knows he won’t stand a chance in the courts, so he reacts in desperation.

In reality, Bigger never had a chance even before the present tragedy. Society had already determined, “his type” were trouble makers; denied any real chance to make good, the expectations usually come true. I believe there is an unfortunate truth in the message. There are rare exceptions who overcome, but if society expects the worst of someone, it is often a self-fulfilling prophecy.

Native Son is a disturbing and enlightening portrayal of this dark truth.

In a bit of foreshadowing, shortly before the catastrophic events of the story, Bigger tells a friend:

From the moment of his “crime” Bigger begins an existential journey – somehow, he feels empowered. It is as if for the first time he is in control of his own life. He feels

…like a man who had been somehow cheated, but had now evened the score.

He hopes to escape punishment, for his innocent mistake, but he is all the time realistic that he probably will not. He almost wants to let the hated white masses know what he has done. This is only scratching the surface of Bigger’s thoughts and emotions. He is calculating and reckless, cowardly and defiant, frightened and peaceful, confused and deliberate.

I’ve read no commentary to suggest this, but I suspect the main character’s name was meant to convey that the story was “bigger” than its character.

Native Son is an important book, I couldn’t put it down, but it wasn’t a lot of fun. I’m sure it wasn’t intended to be. Have you read Native Son or Richard Wright? Your thoughts?

This novel satisfies the following category from the Back to the Classics Challenge 2018: A classic by an author that’s new to you.

Disclaimer – I grew up in middle-class white suburbia not far from Chicago. I usually feel a little trepidation at commenting on a book like this. Reading a novel, about racial inequality does not give me an understanding of minority suffering. My moral outrage at Bigger’s plight does not atone. My words even now are probably patronizing and self-serving.

When does it end? How can it end?

History seems to be saying it ends – painfully slowly. I believe books like Native Son help – albeit painfully and slowly.

For the first time in his life a white man became a human being to him…
He had to make a decision: in order to walk to that chair he had to weave his feelings into a hard shield of either hope or hate. To fall between them would mean living and dying in a fog of fear.
He felt he wanted to live now – not escape paying for his crime – but live in order to find out, to see if it were true, and to feel it more deeply; and, if he had to die, to die within it.
Yet he felt that he could not fight the battle for his life without first winning the one raging within him.
But he is product of a dislocated society; he is a dispossessed and disinherited man; he is all of this, and he lives amid the greatest possible plenty on earth and he is looking and feeling for a way out.
He was not allowed to live as an American