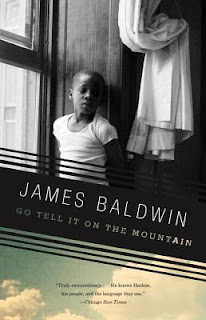 And a voice, for the first time in all his terrible journey, spoke to John, through the rage and weeping, and fire, and darkness, and flood: “Yes,” said the voice, “go through. Go through.”

Go Tell it on the Mountain is a powerful tale, beautifully and fearfully told; and the type for which I struggle to find the right description of my response. I can’t say I liked it, or enjoyed it – it isn’t a happy tale, but it was riveting and I’m glad I read it. So, what do I call that? I’m back to powerful. It evoked both powerful thought and feeling.

It is the semi-autobiographical story of one day in the life, the fourteenth birthday, of John Grimes, in 1930s Harlem. The narrator’s prose is beautiful and descriptive, while the dialogue is colloquial to the period and setting (as far as I know anyway), but still easy to follow. The real power and brilliance comes from how, little by little, Baldwin lets the reader in on the deep dark secrets of the main characters – things that were obvious to the reader, and other characters are proven false when Baldwin exposes the inner conflict in John, his father Gabriel, his mother Elizabeth, and his aunt Florence. There is a chapter devoted to each of these and their inner thoughts revealed through prayers, and during each one there were moments when I went – Wait! What? But then it actually made perfect sense.

It’s pretty brilliant in my opinion. As I mentioned it isn’t a happy tale. It is a painful reminder that the tragedies caused by slavery did not end with emancipation. It is reminiscent of Invisible Man by Ralph Ellison, and I suspect of Native Son by Richard Wright (though I’ve yet to read that one).

Have you read Go Tell it on the Mountain or James Baldwin? What did you think?

I found this first excerpt ironic. James Baldwin, who was not treated well by his stepfather often retreated to the Library – but in this semi-autobiographical account, the narrative describes the main character’s fear of entering a library:

But he had never gone in because the building was so big that it must be full of corridors and marble steps, in the maze of which he would be lost and never find the book he wanted. And then everyone, all the white people inside, would know that he was not used to great buildings, or to many books, and they would look at him with pity.

Not even tonight, in the heart’s nearly impenetrable secret place, where the truth is hidden and where only the truth can live, could she wish that she had not known him

And a voice, for the first time in all his terrible journey, spoke to John, through the rage and weeping, and fire, and darkness, and flood:  “Yes,” said the voice, “go through. Go through.”

Of tears there was, yes, a very fountain – springing from a depth never sounded before, from depths John had not known were in him.