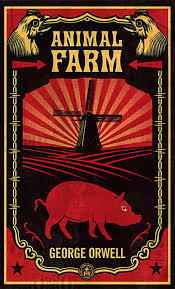 Technically, this was the first time I’ve read Animal Farm. A grade school teacher read it to my class, but that hardly counts. It is the second work by George Orwell that I’ve read [1984]. Animal Farm is an allegory and dystopian novella. It tells the tale of a group of farm animals that form a revolution and take over the farm from their human master.

My sixth-grade teacher read this to our class. At the time, it was just a whimsical fantasy. I didn’t understand or care about the meaning. I was certainly more aware of the satire this time. It added a great deal to my reading.

I’ve often heard that Animal Farm is Orwell’s indictment of communism, but I don’t believe that was his intent. Orwell was himself a socialist. I find it much easier to believe this was an indictment of the Soviet corruption of the communist ideal.

In that regard, it was brilliant. The characters of Stalin and Trotsky are fairly obvious in the pigs Napoleon and Snowball. I imagine other characters are also mapped to specific persons, but I am too ignorant of Soviet history to recognize them. I’m not even sure if Old Major is supposed to be Lenin or Marx.

Aside from the indictment of the Soviet experiment, I think there is at least one very strong warning contained in the satire: the danger of revisionist history.

In the beginning the animals, led by Napoleon and Snowball, enact the seven commandments; the seventh reads:

All animals are equal

Later it is amended to:

which really means some are more privileged than others. And though the reader knows this is a revision, it is politically incorrect for the animals to avow it was ever anything different. Eventually, the first six commandments disappear, and again, none of the animals dare suggest there were ever any others.

I enjoyed Animal Farm, which seems a bit odd, as once again, there is no hero. Boxer, the powerful but unintelligent horse was admirable and pitiable. His friend Benjamin the fatalist old donkey is…well I don’t know how to describe him. He understands what has happened and it makes him somewhat admirable, but his resigned acceptance is detestable. I think the mare Clover is the most likable, but also pitiable, and certainly no heroine.

life would go on as it had always gone on—that is badly.

Orwell would not live to see the failure of the Soviet experiment; he merely envisioned it

Film Renditions: I watched the 1954 animated version as well as a 1999 version with live animals and voices of a few pretty big stars (Kelsey Grammer, Patrick Stewart, et al). The animated version was awful, truly awful. The 1999 version was a bit better, but added a cheery ending that was not at all true to the book, and misses the point entirely. Admittedly, it is a difficult story to do justice via film...and IMO no one has done so yet. 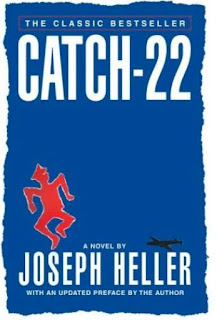 This is the first time I’ve read Catch-22 or Joseph Heller. The novel is a satire and/or dark humor, third-person narrative. It primarily details the life of John Yossarian, a captain and bombardier in the U.S. Army Air Force, operating from Italy during World War II.

This was certainly the most FUN novel I've read thus far, a stark contrast to the tremendous chore of the last [Ulysses]. The setting is an American bomber squadron, operating from Italy during WWII. I wouldn't call it a war story however; it's more of a modernist comic drama in a wartime setting.

I served in the Air Force myself so there was an immediate connection. My time, 1985-2007, was undoubtedly very different from WWII, but there are still elements of military life, tedium, and bureaucracy that resonate. Catch-22 reminds me of M*A*S*H, the TV show. But Heller portrays military life so preposterously as to make it unbelievable. I have no issue with that, comedy is a gross exaggeration of the truth, so I can suspend disbelief for a laugh and entertainment. I have no doubt there were absurd moments, bizarre circumstances, enacted by incompetent players for ludicrous ends, but I can’t take most of the story seriously.

The concept of Catch-22 named, but certainly not invented, by Heller is quite entertaining:

There was only one catch and that was Catch-22, which specified that a concern for one's safety in the face of dangers that were real and immediate was the process of a rational mind. Orr was crazy and could be grounded. All he had to do was ask; and as soon as he did, he would no longer be crazy and would have to fly more missions. Orr would be crazy to fly more missions and sane if he didn't, but if he were sane he had to fly them. If he flew them he was crazy and didn't have to; but if he didn't want to he was sane and had to. Yossarian was moved very deeply by the absolute simplicity of this clause of Catch-22 and let out a respectful whistle.