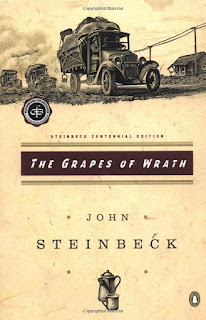 
This is the second time I’ve read The Grapes of Wrath. It is a realist novel, third-person narrative, telling the tale of Joad family as they flee the dustbowl of Oklahoma for the land of plenty in California. The book won a Pulitzer Prize for fiction, and was probably the greatest factor leading to Steinbeck’s Nobel Prize.

At last a hero. For me, it was not Tom or the Preacher Casey, it was Ma. Her tireless devotion to one thing, her family, is monumentally heroic. I am tempted to “rant” about modern society, but I will resist and offer only a mini-rant. There is a notion, most often implied but at times uttered blatant and explicit, that if a woman can offer nothing greater to society, it’s OK, to be “just a mom”. What a lie! What an ignorant, stupid, evil lie. There is no greater calling. Abraham Lincoln said, “All that I am, or hope to be, I owe to my angel mother.” How many doctors, entrepreneurs, or inventors affected the world so much?

But I digress. Ma is the hero. The novel ends without a very cheery outlook for the Joad family, which has already lost both grandparents, two sons, a son-in-law, and a babe, but Ma is undefeated. She is my hero.

I'd forgotten the ending, the poignant, terrible, beautiful ending.

I read The Grapes of Wrath once before, required reading in High School. I thought it was compelling and well written but having not yet known responsibility, I didn’t really appreciate the full affect. This time, to say I enjoyed it, is not quite right. I read with a lump in my throat, tears in my eyes, or rage in my heart. It was not enjoyable, but it is the “greatest” work I have read thus far.

As such, I feel inclined to say a little more about the author. It struck me as odd that Steinbeck would follow Orwell, the communist follow the socialist, and that they should be two of my favorites. So, for the record, I am not now, nor have I ever been a communist.

I’m not certain Steinbeck was either. He was labeled at a time, when few people could give a very lucid definition of communism (actually, I think that’s still true). Yes, I know he belonged to organizations with the word communist right there as part of their name, so I’m not saying he wasn’t either. It seems to me as though Steinbeck was critical of the excess and coldness of capitalism, and if you stand opposed to capitalism, you are going to be called and may very well call yourself, a communist. Again, I’m not a communist, but I’m not an apologist for capitalism, which is not without its own disgraces. I believe Steinbeck wrote at a time, about a time, of such disgrace.

Ma sees Tom for the first time in years, when he shows up unexpectedly released from prison:

She moved toward him lithely, soundlessly in her bare feet, and her face was full of wonder. Her small hand felt his arm, felt the soundness of his muscles. And then her fingers went up to his cheek as a blind man’s fingers might. And her joy was nearly like sorrow.

And the great owners, who must lose their land in an upheaval, the great owners with access to history, with eyes to read history and to know the great fact: when property accumulates in too few hands it is taken away. And that companion fact: when a majority of the people are hungry and cold they will take by force what they need. And the little screaming fact that sounds through all history: repression works only to strengthen and knit the repressed. The great owners ignored the three cries of history. The land fell into fewer hands, the number of the dispossessed increased, and every effort of the great owners was directed at repression. The money was spent for arms, for gas to protect the great holdings, and spies were sent to catch the murmuring of revolt so that it might be stamped out. The changing economy was ignored, plans for the change ignored; and only means to destroy revolt were considered, while the causes of revolt went on.

The tractors which throw men out of work, the belt lines which carry loads, the machines which produce, all were increased; and more and more families scampered on the highways, looking for crumbs from the great holdings, lusting after the land beside the roads. The great owners formed associations for protection and they met to discuss ways to intimidate, to kill, to gas. And always they were in fear of a principal—three-hundred-thousand—if they ever move under a leader—the end. Three-hundred-thousand, hungry and miserable; if they ever know themselves, the land will be theirs and all the gas, all the rifles in the world won’t stop them. And the great owners, who had become through the might of their holdings both more and less than men, ran to their destruction, and used every means that in the long run would destroy them. Every little means, every violence, every raid on a Hooverville, every deputy swaggering through a ragged camp put off the day a little and cemented the inevitability of the day.

Film Rendition: 1940 starring Henry Fonda. I thought this was a pretty decent portrayal, though they didn't attempt the poignant ending from the novel. Admittedly, that would have been difficult to do in 1940. I thought Fonda was very believable as Tom Joad. John Carradine (father of David Carradine btw) was superb as the preacher Casey, and the rest of the casting was good, with the exception of Ma portrayed by Jane Darwell. I don't think Ma was supposed to be quite so stout. I pictured her more like Patricia Neal from The Homecoming a Christmas Story. Neal would have been far too young at the time to play Ma. That's just how I pictured her. If you like The Grapes of Wrath or at least feel it is an important piece of literature, I'd recommend the movie.