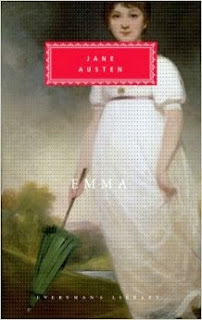 This is the first time I’ve read Emma or Jane Austen. Emma is a Romance era novel, third-person account of Emma Woodhouse, a heroine that Austen said: "no one but myself will much like." The setting is England, very early 19th century.

I endeavored to proffer my review of Emma in a style signified to flatter Austen’s own, but discretion compelled me forbear. I avow that this I owe to unfeigned trepidation that I should discover myself unequal to the task. The result, I feared with absolute certitude, would be found intolerably deficient, and I should reproach myself for the vain aspiration that, though most nobly imagined, must be considered both ill-conceived and ill advised, by any persons possessing themselves of elegant and judicious sensitivities.

So let me just say…I liked it a lot.

As I said, this is the first Jane Austen novel *gasp*, I know. However, I was familiar with the story due to a film rendition. There were aspects I would have enjoyed more, had I been in suspense. It is a romance novel set in Surrey, England. I don’t believe a precise date is ever set, nor are there historical reference points to infer the date. It was first published in 1815, and is probably meant to take place in the early 19th century. It is the story of Emma Woodhouse, the spoiled daughter of an English gentleman, an avowed bachelorette, and the epitome of a busy body. She is also beautiful, gracious, intelligent and kind hearted.

Regarding Austen’s surmise of Emma that she would be: a heroine whom no one but myself will much like. That’s about right. I liked Emma, but I didn’t like her much.

Of course, there are numerous other characters. Some comic: Emma’s father, and Emma’s friend Miss Bates; some tragic, at least temporarily: Emma’s protégée Harriet Smith; some comically detestable: Mr. and Mrs. Elton; some mysterious: Jane Fairfax; some cavalier: Frank Churchill; some lovable: Emma’s former governess and dear friend Mrs. Weston; and one distinct, noble, admirable, wise and good: Mr. Knightley. I believe Knightley is a much an adjective as it is a surname. Or if you prefer, an aptronym.

Knightley is an old family friend. His relationship with Emma appears to be nearly that of an older brother. He is sometimes stern, but always protective and courteous. You may infer from what I’ve said, as the reader infers, that there is more than brotherly affection behind Mr. Knightley’s regard. This aspect of the story, more than any other, I wish I had not known and could have discovered gradually and then suddenly with Emma.

There is one thing, Emma, which a man can always do, if he chooses, and that is his duty… ~ Mr. Knightley

A mind lively and at ease, can do with seeing nothing, and can see nothing that does not answer.

I certainly must, said she. This sensation of listlessness, weariness, stupidity, this disinclination to sit down and employ myself, this feeling of everything’s being dull and insipid about the house! – I must be in love… ~ Emma

It darted through her, with the speed of an arrow, that Mr. Knightley must marry no one but herself! ~ Emma’s thoughts

Film Rendition: I felt the 1996 film rendition with Gwyneth Paltrow as Emma and Jeremy Northam as Mr. Knightly is very good, and quite faithful. I have only two complaints, and one is my own fault. I wish I had read the book first. I believe I would have enjoyed the book more for not knowing the end, and I think I would have enjoyed the movie more knowing more of the details and finer points for having read the book. My other complaint is the casting of Ms. Paltrow as Emma. This is no critique of her acting, I think she played the part quite well. She is simply not at all how I pictured Emma. The rest of the casting was very good however, so I still give the movie high marks.

One Flew Over the Cuckoo’s Nest by Ken Kesey is the story of a group of residents in a mental institution and the battles they wage with the head nurse. It is best known for the Academy Award winning film, and although the film is fairly true to the book, there is an aspect of the book that just didn’t translate to film. The book is certainly worthy in its own right.

For my full review click here. This S2-PS post is a review from my early blogging experience that didn’t get many page views.

S2-PS is a weekly meme, hosted by The Once Lost Wanderer. You are invited to join in and promote your own blog!
o   It might have received few page views, or few comments,
o   or be one you are particularly pleased with and you just want it revisited,
o   or any other reason that suits you.

Posted by Joseph at 7:44 AM No comments:

And To Think That I Saw It On Mulberry Street by Dr. Seuss, Guest book review by my Grandson Luke 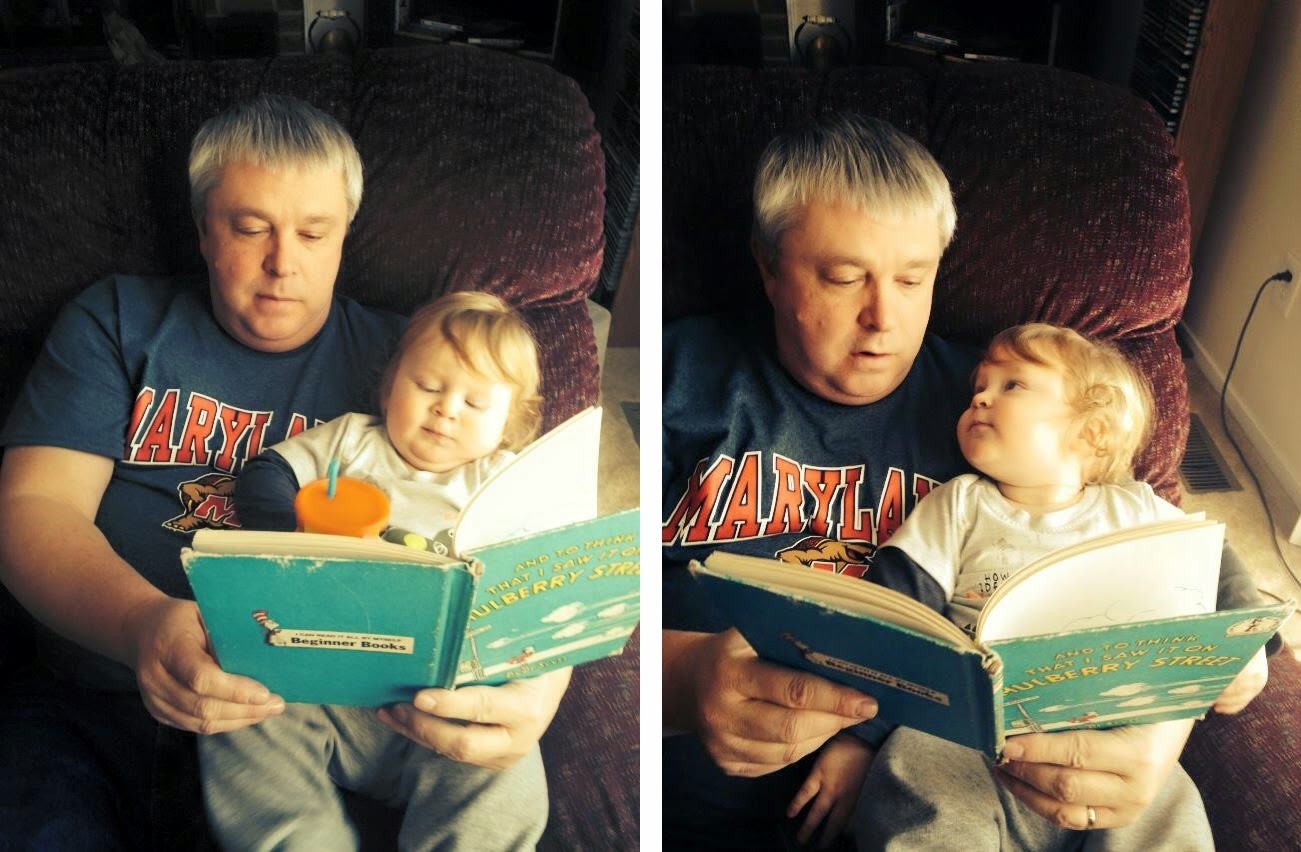 My Grandson Andrew previously contributed guest book reviews for Because a Little Bug Went KA-CHOO! and Bears on Wheels.  Andrew’s older cousin Luke is ordinarily more taciturn and disinclined to elucidate his reaction to classic literature. However, Luke and I were reading And To Think That I Saw It On Mulberry Street recently, and being profoundly moved, Luke yielded his natural diffidence to offer the following.

And To Think That I Saw It On Mulberry Street is the first person narrative of Marco, a young boy who on most occasions, tends to exaggerate the sights he witnesses during his daily transit from school to abode. Luke believes Marco to be something of a cross between Tom Sawyer and an adolescent Walter Mitty. Marco’s father chides him to: Stop telling such outlandish tales. Stop turning minnows into whales.

On the day of the story, Marco resumes his daily trek apparently oblivious to his father’s good advice. He encounters nothing more exciting than an ordinary horse and wagon, but schemes to fabricate a much more grandiose memoir. He promotes the horse first to a zebra, then a reindeer, then an elephant, and finally an elephant plus two giraffes. Similarly, the wagon is transformed to a chariot, a sled, and eventually a cart conveying a brass band.

The embellishment of course continues with even greater and more extraordinary players.

The embellishment, Luke wishes to correct, is simply a fib, and he hastens to add, fibbing is wrong.

Luke confesses an intensifying sense of dread as the fib continued to grow with alarming proportion. He feared the duplicitous nature of the intended narration would throw Marco’s familial harmony into grave jeopardy. 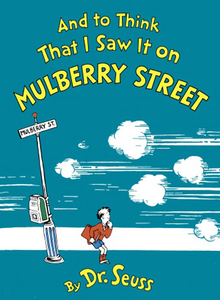 Luke’s apprehension was much relieved when Marco got home and found himself unable to bring the deception to bear, and recounted only seeing a simple horse and wagon.

Although Luke was relieved that Marco restored his virtue and credibility, he felt there were several holes in the plot. First, Luke feels it would be pretty cool to see a horse and wagon, and would indeed feel fortunate to regale his father with such a fortuitous sighting. Secondly, and more importantly, Luke felt there was inadequate catalyst for Marco’s change of heart. He felt the moral dilemma that is certainly implied, could have been more fully developed, and as such would have served as an enduring testimonial to this important work, and given valuable warning to future generations of would be fibbers.

Luke opines that Mulberry Street is ostensibly a modernist or perhaps post-modernist rendition, he doesn’t really see the difference, of what we might perceive as a semi-autobiographical account of Theodor Geisel’s childhood, and how he turned his propensity of telling wild tales to good use. The charm of that theory notwithstanding, Luke feels the narrative is rather a motif with clear existentialist underpinnings. Marco is clearly seeking to affirm his own relevance with fantastic stories, but before the reader’s very eyes, Marco comes of age, realizing that relevance can only be recommended by a life of honesty and integrity. Luke says…Bravo Marco!

Yes, that's a Maryland Terrapins t-shirt I'm wearing in the picture. Fear the Turtle!
.
Posted by Joseph at 6:52 PM 4 comments:


Teaser Tuesdays is a weekly bookish meme, hosted by MizB of A Daily Rhythm. Anyone can play along! Just do the following:

• Open to a random page

• Share two (2) “teaser” sentences from somewhere on that page

• BE CAREFUL NOT TO INCLUDE SPOILERS! (make sure that what you share doesn’t give too much away! You don’t want to ruin the book for others!)

• Share the title & author, too, so that other TT participants can add the book to their TBR Lists if they like your teasers!

My Teasers: “A man,” said he, “must have a very good opinion of himself when he asks people to leave their own fireside, and encounter such a day as this, for the sake of coming to see him. He must think himself a most agreeable fellow; I could not do such a thing.