Have you ever thought about the difference between Memorial Day and Veterans Day? They’re rather similar – similar but distinct.

Disclaimer: This applies to the U.S. holidays. Our great friends and allies in the Commonwealth of Nations honor their veterans differently. Since I was privileged to live and serve in Canada, and Europe, I’ll add a few thoughts about Remembrance Day as well.

Memorial Day is a National Holiday to honor those who have DIED while serving in the Armed Forces.

Veterans Day is a National Holiday to honor those who SERVED in the Armed Forces. It of course includes all those we honor on Memorial Day, but it also includes those wo served without making the supreme sacrifice.

I’m writing about the difference for three reasons:  1. I am a logophile, or lover of words. I’m interested in subtle distinctions. 2. From time to time, people thank ME for my service on Memorial Day, and although I appreciate the sentiment, I am not worthy of recognition on Memorial Day. That’s reserved for Veterans Day when I get a free meal at Applebee’s.

And 3. I intended to post a quotation from a specific war memorial today, but when I thought about it, it is more appropriate for Veterans Day. If you check back in November, I’ll post it then.

It was easy enough to find another quotation. I’ve had the privilege of visiting quite a few war memorial monuments, and there are plenty of poignant quotations. (Parenthetical Tangent: I am intentionally using the word quotation vs quote – because quote is incorrect. Quotation is a noun, quote is a verb. What I post is a quotation, not a quote. Logophile remember?)

This quotation is from the main memorial at the National Memorial Cemetery of the Pacific in Honolulu, known locally as Punchbowl. The cemetery sits in an extinct volcanic crater. It’s a beautiful site. 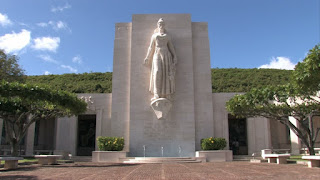 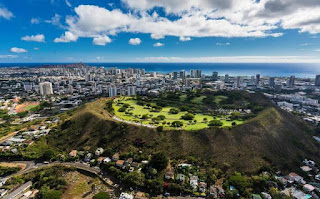 Among the words on the monument it reads:

The solemn pride that must be yours to have laid so costly a sacrifice upon the altar of freedom.

If that rings a bell, it is from President Lincoln’s letter to Mrs. Bixby. Abe was pretty good with words.

As promised: The Commonwealth of Nations observe Remembrance Day to remember their war dead. However, they celebrate it on November 11 to mark the cessation of hostilities of WW I – the eleventh hour, of the eleventh day, of the eleventh month. As this is the day the U.S. observes Veterans Day, it can be inferred they are the same, but truthfully Remembrance Day is more like Memorial Day, even though it coincides with Veterans Day. Remembrance Day is sometimes referred to as Poppy Day, as the patriots in those countries wear poppies in honor to their war dead, with reference to the poem In Flanders Fields by LtCol John McCrae, Canadian Army. He was good with words too.
Posted by Joseph at 11:28 AM No comments:

May 25: Ten Books I Feel Differently About After Time Has Passed (less love, more love, complicated feelings, indifference, thought it was great in a genre until I became more well read in that genre etc.)

1. The Little Prince by Antoine de Saint-Exupéry:  I first read this when I was about 10, and I thought it was the dumbest thing I’d ever read. (I guess I imagined myself well-read at 10.) Anyway, 30+ years later and I reread and loved it. More about this HERE.

2. I’m just going to say any novel written in stream-of-consciousness, to include most works by Faulkner, Woolf, Joyce. I hated Ulysses by James Joyce, my first experience, but the more I read of this style, the more I get used to it. Still not a favorite, probably never will be, but expanding my universe – all that.

3. David Copperfield by Charles Dickens: I loved this the first time, but enjoyed it even more with a recent reread. There is a good deal of foreshadowing that I missed the first time, that was very obvious with the reread.

4. The Call of the Wild by Jack London: Another one, where the different feelings are due mostly to reading as a child and then reading as an adult. As a child, I wanted Buck to remain with Thornton, his first kind and loving master; I didn’t really understand the point of the story: the primal call. As an adult, I was satisfied when Buck answered the call.

Those are the only ones that I can think of where there was a major shift in my feelings. There are many that improved somewhat with a second read. Conversely there were none that I liked less with a reread.

I might even give Ulysses a second chance someday. 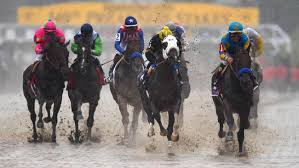 So, you can probably guess, I'm picking Exaggerator. Add Nyquist, Lani, and Uncle Lino, to your trifecta box - can't miss.

I’ve been a fan of thoroughbred horse racing ever since the Summer of 73 when I watched the Great Secretariat win the Triple Crown.

I know this subject will be of little interest to most bookish readers, but keep reading, there’s something here for the logophile.

Later today will be the 142nd running of the Kentucky Derby, the Run for the Roses, the First Saturday in May – the Most Exciting Two Minutes in Sports. A bit later, I’ll tell you who’s going to win and why.

But first, that promised bit that might interest bookish sorts who may at least have an appreciation of the lyrical, poetic, or fanciful names of the horses such as Northern Dancer, Distorted Humor, Winning Colors, and Spectacular Bid. I don’t find any of the names this year particularly poetic, but a couple of the runners are descended from champions with great names. My long shot pick, Lani, is the grandson of Sunday Silence (best name ever) and Shagaf, who has little chance to win, is the grandson of Unbridled’s Song.

And a bonus for the logophiles, did you know the horses are not horses – they’re colts. In a very general sense, a horse is not a horse, until maturity, or four years old and up. The Kentucky Derby is limited to three-year olds, which are either colts or geldings (male) or fillies (female). Fillies occasionally run in the Kentucky Derby, though only Winning Colors, Genuine Risk, and Regret have won. However, this year’s field is entirely colts and geldings. Mature horses are more specifically referred to as stallions (males) and mares (females).

A disclaimer before my picks: The Kentucky Derby is one of the hardest races in the world to handicap. Why? A lot of reasons, but the main one is the HUGE field. Most thoroughbred races have 8-10 runners, a few rare races have 12-14. The Kentucky Derby is a 20 horse stampede, and the best horse can get caught in traffic, which may cost him the race. I’m a pretty good handicapper, but I throw this disclaimer out there in case I’m way off.

My picks – Top Three – In order: Exaggerator, Nyquist, and Lani.

I like Exaggerator over the probable favorite Nyquist even though Nyquist previously beat Exaggerator. Exaggerator has had more consistent speed in his last five races; and I just feel he will have a good race today – in handicapping terms – I feel he’s “sitting on a big race". His jockey. Kent Desormeaux, is one of my favorites. He is a hall of fame jockey who has won the Kentucky Derby three times. He had a fall from grace a few years ago with some personal drama, but seems to rebounding. Gotta love a comeback. The trainer, Keith Desormeaux is Kent’s brother but this is his first trip to the Derby. Gotta love a Cinderella story.

Undefeated Nyquist will probably be the odds-on favorite, but my second choice. I like Nyquist because he is undefeated of course, plus I picked him in the Breeder’s Cup Juvenile and Florida Derby. Finally, he is named for a player on the Detroit Red Wings (my NHL team). I’m ambivalent about the jockey and trainer.

Lani is a longshot, but I like his chances, and I like the odds he’ll get even better. I already mentioned one thing I like, his bloodline – grandson of Sunday Silence the Winner of the 1989 Kentucky Derby, and Preakness. Sunday Silence lost the Belmont Stakes, and hence the Triple Crown to his arch-rival, Easy Goer. Back to Lani, none of the colts today have ever run 1 ¼ miles before, but Lani has come closer than any, in winning the 1 3/16 UAE Derby. He has also run in traffic, with 2 races of a field of 16, one of 15 and one of 14 – so Lani has better experience at the distance and with the large field. This horse is based in Japan though, and the trainer and jockey are unknown to me.

I also think Gun Runner and Creator will be in the mix, but I am not a fan of their trainer, and indifferent to their jockeys.

One more thing for the logophiles. Something I wrote once about Kentucky Derby day, and the greatest racehorse ever.  Ghosts of Derbies Past
Posted by Joseph at 7:44 AM 1 comment: