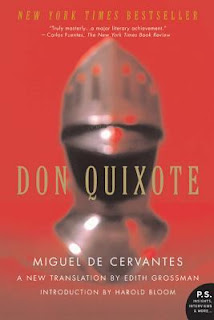 A crazy man his life he passed...But in his senses died at last

This the second time I’ve read Don Quixote. I am not certain how to categorize it. It was written in the early 17th century, so a bit late for medieval literature and a bit early for enlightenment. It coincides with English Renaissance, but of course it is not English. It is also too late for what is conventionally considered the Romantic Era, but I would say that may be where it fits best. Of course, it may be appropriate to say it is a reference unto itself. Don Quixote is one of the earliest novels ever written, and according to the World Library, “the best literary work ever written”.

In spite of all that…

To be fair, I am told much is lost in translation. I once discussed this important novel with a Spaniard, and his praise for the book bordered on reverence. He told me that it is full of word play, puns, and allusions that simply do not translate. It may well be true.

I’m sorry but, translation difficulty notwithstanding, I don't get it. I know people who idolize Don Quixote (the character). I don’t get that either. To me, he is just nuts.

OK, not truly JUST nuts. He has some admirable qualities, but I just don’t see him as such a worthy character. Amusing? Yes. Fascinating even? Yes, but not heroic and not one to idolize.

SPOILER ALERT: This review contains a spoiler. I usually try to avoid spoilers, but I can't review this without writing about how it all ends.

Don Quixote is an epic tale regarding the adventures of Spanish nobleman, Alonso Quixada, or Don (a Spanish title of nobility or prestige) Quixote, who reads romantic stories of knights of a bygone age, and fancies himself a great and glorious knight errant, destined to revive the age of chivalry.

He is an idealist, you might even say he is THE idealist. And for that, I’ll give him credit. He had the courage of his convictions. I think that is admirable to a point, but not necessarily heroic.

Reason holds the helm, but passions are the gales.

And now, I’ll be so bold as to offer commentary on President Adams’ words of wisdom, and I do think them profoundly wise. Reason without passion is impotent; passion without reason is reckless. In my humble opinion, Don Quixote was passionate, but out of his senses (not reasonable), and therefore reckless with his life. The gales of his madness blew him many leagues, but there was no one holding the helm. To me, Don Quixote’s was a life wasted.

A portion of his epitaph:

Of course, this is just my impression of the main character. It says nothing of the quality of the story. I’m not sure why this is considered such a great novel, but since my judgment is almost certainly hampered by translation, I’ll make no further judgment.

Don Quixote’s faithful squire Sancho Panza is an amusing character. His devotion to his master is touching and his devotion to food, wine, sleep, and comfort makes for many instances of comic relief. There is delightful dialogue between Sancho and Don Quixote, and some wildly comic situations caused by Don Quixote’s delusion, but all in all, I’m glad to put this one back on the shelf.

…it will be labor in vain for you to urge me to resist what heaven wills, fate ordains, reason requires, and, above all, my own inclination favors; for knowing as I do the countless toils that are the accompaniments of knight-errantry, I know too, the infinite blessings that are attained by it; I know that the path of virtue is very narrow, and the road of vice broad and spacious; I know their ends and goals are different, for the broad and easy road of vice ends in death, and the narrow and toilsome one of virtue in life, and not transitory life, but in that which has no end… ~ Don Quixote

…it must be that some of your worship’s shrewdness sticks to me; land that, of itself, is barren and dry, will come to yield good fruit if you dung it and till it; what I mean is that your worship’s conversation has been the dung that has fallen on the barren soil of my dry wit… ~ Sancho Panza

…when Sancho tried to talk fine and attempted polite language, he wound up by toppling over from the summit of his simplicity into the abyss of his ignorance… ~ Don Quixote

Our guest has broken out on our hand, said Don Lorenzo to himself at this point; but, for all that, he is a glorious madman, and I should be a dull blockhead to doubt it. ~ A Nobleman’s observation of Don Quixote