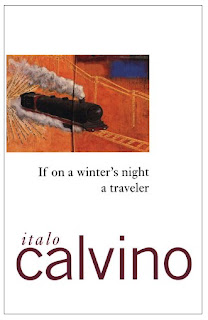 If on a Winter’s Night a Traveler by Italo Calvino

“The novels I prefer,” she says, “are those that make you feel uneasy from the very first page…” ~ Ludmilla

If on a Winter’s Night a Traveler is a very unusual novel. It is a frame story, employing metafiction. It is the story of a reader, two readers actually, trying to read. Philosophically, I’d say it is a story about the love of reading.

It is marvelously clever, though a bit confusing on first read. Each chapter begins with second person narrative explaining something to you, the reader, about the nature of your reading. It is filled with wonderful advice about how to enjoy the reading experience, such as…

…having your feet up is the first condition for enjoying a read.

Or asking before you begin…

Do you have to pee?

The second person narrative is the real story.

Though I have to admit, each of the metafictional first chapters are quite captivating.

The you reader, is male, and believe it or not the fellow frustrated reader is female, young and beautiful. Go figure. She, Ludmilla, has some insightful ideas on reading:

“The novels I prefer,” she says, “are those that make you feel uneasy from the very first page…”

“The novel I would most like to read at this moment,” Ludmilla explains, “should have as its driving force only the desire to narrate, to pile stories upon stories, without trying to impose a philosophy of life on you, simply allowing you to observe its own growth, like a tree, an entangling, as if of branches and leaves…”

The pattern continues, and comes to a very pleasing if not quite complete closure. It’s brilliant. If you read this blog with any regularity, you probably love reading, so if you have not – you ought to read If on a Winter’s Night a Traveler. This was a reread for me. I’ll definitely read more of Calvino. 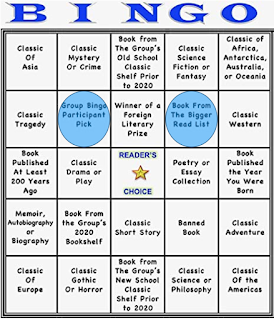 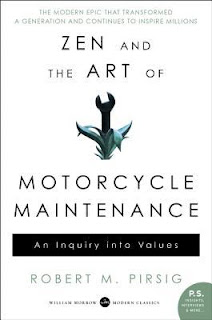 To reject that part of the Buddha that attends to the analysis of motorcycle maintenance is to miss the Buddha entirely. ~ narrator

This book is a bit difficult to categorize. It is a fictionalized autobiography told in story form by the first-person narrator, Pirsig of course, though he never identifies himself, not by that name at least. Pirsig has this to say about the book in the introduction:

…it should in no way be associated with that great body of factual information relating to orthodox Zen Buddhist practice. It's not very factual on motorcycles, either.

It is also difficult to synopsize. At first, it is very much what the title describes – the narrator’s application of Zen principles to motorcycle maintenance, set during a cross-country motorcycle trip with the narrator’s adolescent son Chris, and friends John and Sylvia Sutherland.

The narrative recounts the places, people, and events of the trip, interrupted frequently by the narrator’s Chautauquas – philosophical discussions on numerous subjects, but mostly on the concept of “Quality”.

Slowly, the reader realizes the trip is revisiting old places, people, and events from the narrator’s past – from before he went insane.

The narrator recalls these vestiges through the memories of who he was before – before insanity – the person Phaedrus.

He [Phaedrus] was single-mindedly pursuing a truth he felt was of staggering importance to the world.

All he had left was his one crazy lone dream of Quality, a map of a route across the mountain, for which he had sacrificed everything. Then after the electrodes were attached, he lost that.

I think his pursuit of the ghost of rationality occurred because he wanted to wreak revenge on it, because he felt he himself was so shaped by it. He wanted to free himself from his own image.

I think there is such a thing as Quality, but that as soon as you try to define it, something goes haywire. You can’t do it.

And professes that his purpose for the trip and the Chautauquas is to...

The trip is also an attempt by the narrator to re-connect with his son Chris, who clearly has memories of his father before, and his father now. At times the trip seems to be having a gentle and reassuring effect on their relationship, at other times it seems only to drive a wedge.

And then – a stunning end. Who was mad? Phaedrus or the narrator? Who would survive? What would it mean for Chris. Recommendation: Read the final two chapters in hard-copy. my eReader did not include an all-important font change, that differentiates between the narrator’s words and those of Phaedrus. Fortunately, I have a tree-book as well, and had some forewarning of this nuance.

Mixed emotions. I think Pirsig did a marvelous job of telling his story, and the ending is very clever. He offers intimate and honest insight on his philosophy. I enjoyed the travelogue and the narrator’s interaction with his son. But the philosophical discussions? Some were fascinating, but my biggest – not so much complaint, but – my biggest meh? It was a good deal too much navel-gazing for me.

This book satisfies square I-2 in 2020 Classic Bingo Challenge.

Excerpts (all words of the narrator):

Although motorcycle riding is romantic, motorcycle maintenance is purely classic.

I suppose if I were a novelist rather than a Chautauqua orator I’d try to develop the characters of John and Sylvia and Chris with action-packed scenes that would also reveal inner meanings of Zen and maybe Art and maybe even Motorcycle Maintenance.

To live only for some future goal is shallow. It’s the sides of the mountain which sustain life, not the top.

What Phaedrus has been talking about as Quality, Socrates appears to have described as the soul, self-moving, the source of all things.

Back to the Classics Challenge 2020

Books and Chocolate is hosting Back to the Classics Challenge 2020 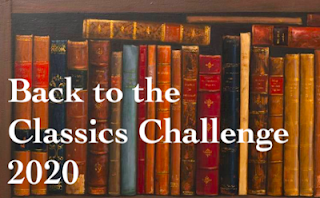 My selections (subject to change) Oops! my original post had three works that do not meet the rules of being published 1970 or earlier. I've replaced the translation, woman author, and adapted classic categories with older works and am now in compliance with the rules :)

Classic by a Woman Author: Under the Net (Iris Murdoch)

Classic in Translation: The Stranger * (French)

Classic by a Person of Color: The Tale of Genji * (Murasaki Shikibu, Japanese)

Classic with a Person's Name in the Title: Jude the Obscure *

Classic with a Place in the Title: The Tenant of Wildfell Hall *

Classic with Nature in the Title: Wide Sargasso Sea *

Classic About a Family: The Castle of Otranto *

Classic Adaptation: The Sign of the Four  (numerous film renditions)
* also used in the 2020 Classic Bingo Challenge)
.
Posted by Joseph at 9:01 AM 20 comments: 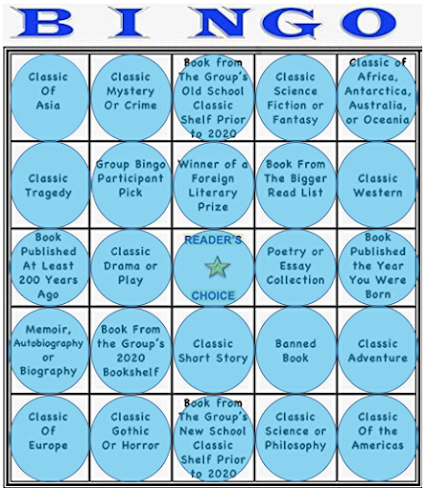 I’m shooting for Level Four Bingo: Filling out the entire board. The following are the titles I’ve chosen (subject to change):
B1: The Tale of Genji by Murasaki Shikibu *
B2: Jude the Obscure by Thomas Hardy *
B3: The Castle of Otranto: A Gothic Story by Horace Walpole *
B4: George Washington: Ordinary Man, Extraordinary Leader by Robert F. Jones
B5: Nicholas Nickleby by Charles Dickens *
I1: The Sign of the Four by Sir Arthur Conan Doyle *
I2: Zen and the Art of Motorcycle Maintenance by Robert Pirsig
I3: All’s Well that Ends Well by Shakespeare
I4: The Divine Comedy by Dante Alighieri
I5: TheHouse on the Borderland by William Hope Hodgson
N1: The Tenant of Wildfell Hall by Anne Brontë *
N2: The Sea, the Sea by Iris Murdoch
N3: At Swim Two-Birds by Flann O’Brien
N4: Twenty-six Men and a Girl by Maxim Gorky
N5: WideSargasso Sea by Jean Rhys *
G1: Phantastes by George MacDonald *
G2: If on a Winter’s Night a Traveler by Italo Calvino
G3: Rudyard Kipling: Selected Poems
G4: Fahrenheit 451 by Ray Bradbury
G5: The Stranger by Albert Camus *
O1: Cry, the Beloved Country by Alan Paton
O2: Riders of the Purple Sage by Zane Grey *
O3: Wherethe Red Fern Grows by Wilson Rawls *
O4: Greenmantle by John Buchan
O5: Ragtime by E. L. Doctorow
* (will also be used to complete the Back to the Classics 2020 Challenge) .
Posted by Joseph at 8:17 AM No comments: