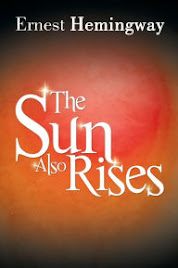 This is the first time I’ve read The Sun Also Rises. It is a modernist, first person narrative of Jake Barnes, an American expatriate working in Paris in the mid 1920s.

I am perplexed as to why this is considered such a great work. I am myself ambivalent; didn’t love it, didn’t hate it. I’ve read other novels on my list that I disliked, but still understood how they are considered great, but this? I don’t understand. This is not a criticism. I think it is superbly written, and somewhat compelling. I just don’t know why it ranks so high.

The main character, Jake Barnes, is Hemingway, and the story is based on a
real-life experience Hemingway had with a group of friends in France and Spain. The rest of the characters are also mapped to real persons, but their true tales, aside from this brief glimpse, are unknown to me, so I will only refer to the characters. The main characters being Jake, his friend Robert Cohn, and Lady Brett Ashley. Jake loves Brett but because he was left impotent from a war wound, feels a relationship is hopeless. Brett professes to love Jake, who seems to be the only person that understands her, but she is impetuous, fickle, and promiscuous. The two are resigned to the belief that a true relationship is futile. Numerous failed relationships are implied and Brett is now engaged to an Englishman Mike Campbell. This doesn’t stop her from having a brief and meaningless affair with Cohn. Campbell knows of the affair, and others, and accepts them as part of Brett’s fervidity. Cohn however, is ridiculously in love with Brett, in spite of the fact that she does everything to discourage him.

The story culminates when Jake, Brett, Mike, Cohn, and another American Bill, travel via different groups and means, to meet at the Festival of San Fermin in Pamplona Spain. It includes the famous running of the bulls, bullfights, a love quadrangle, interpersonal complexities of the group, and a lot of drinking.

As I understand it, Hemingway originally called the novel, The Lost Generation. I think it was a better title. What a mess these people were. If this was a glimpse of Hemingway’s life, I think it was a sad life, glorious adventurer persona notwithstanding. As I said though, it was superbly written. I especially like one account, not really important to the overall plot, of an older matador, Belmonte. He was once, one of the very best. His legend is still recognized, but the crowds have begun to express contempt for his lackluster performance. Hemingway did such a wonderful job describing him, I could feel his pain, and wounded pride.

For the record, I don’t condone bullfighting; it’s just the setting, and a real-life avocation of Hemingway’s.

Quotations: Really just one bit I liked. I like the writing, but also a peculiar notion of prayer and religion that Jake (and I presume, Hemingway) held. Jake steps into a church in San Fermin, and decides to pray.

I knelt and started to pray and prayed for everybody I thought of, Brett and Mike and Bill and Robert Cohn and myself, and all the bull-fighters, separately for the ones I liked, and lumpin all the rest, then I prayed for myself again, and while I was praying for myself I found I was getting sleepy, so I prayed that the bull-fights would be good, and that it would be a fine fiesta, and that we would get some fishing. I wondered if there was anything else I might pray for, and I thought I would like to have some money, so I prayed that I would make a lot of money, and then I started to think how I would make it, and thinking of money reminded me of the count, and I started wondering about where he was, and regretting I hadn’t seen him since that night in Montmartre, and about something funny Brett told me about him, and as all the time I was kneeling with my forehead on the wood in front of me, and was thinking of myself as praying, I was a little ashamed, and regretted that I was such a rotten Catholic, but realized there was nothing I could do about it, at least for a while, and maybe never, but that anyway it was a grand religion, and I only wished I felt religious and maybe I would next time…

Film Rendition: The 1957 film starring Tyrone Power as Jake, and Ava Gardner as Brett is a very good rendition. Gardner is especially good and appropriately beautiful as Lady Brett. Eddie Albert was an amusing choice for Bill, but he pulled it off. Errol Flynn played Mike Campbell, and Mel Ferrer as Robert Cohn was convincingly annoying. 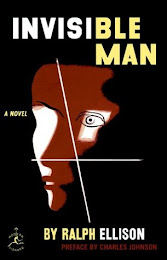 This is the first time I've read Invisible Man or Ralph Ellison. It is a modernist, existential, first person narrative of - the invisible man - who is never named. It is the agonizing tale of an African-American man, set mostly in 1930s, Harlem, New York.

First, I need to point out that Invisible Man by Ellison is not to be confused with The Invisible Man by H.G. Wells. If only someone had pointed this out to me, I wouldn’t have first read the latter, which was entertaining but hardly worthy of such high status. I caught my error when I started to prepare my blog entry, and checked the list to get the publication date, I noticed the author, slapped my forehead, and felt rather silly. I am glad however, that I caught the mistake before posting a review of Wells’ novel. In spite of this accidental detour, I will not be renaming my quest The 100 Greatest, Plus One Reasonably Entertaining but Hardly Great, Novels Quest.

So now about Invisible Man by Ralph Ellison: I must admit there is much I don’t understand about this important novel. It is written from the perspective of an African-American man in the first half of the 20th Century. Reading his account offers insight, but can't truly make me understand his lot in life. So, if any of my commentary is wildly off the mark, I’d welcome alternative views.

I have not read extensively about Ellison himself, but I get the sense Invisible Man is based on his own perceptions of African-American life, though not quite autobiographical. The entire first person narrative is told by an unnamed African-American man, who is born and raised in the south and moves to New York (Harlem) in early adulthood, probably in the 1930s. The fact that the central figure is unnamed is doubtless intentional as it contributes to the title and theme of invisibility. The narrator, or invisible man, states:

I am invisible, understand, simply because people refuse to see me.

I believe this is an important novel, and timely, but I am reluctant to be more precise. I think there are lessons the invisible man learned that could serve African-Americans well, but I don't have the right to suggest it. Ellison on the other hand does, and I believe, at least in part, that was his intent. Take it or leave it.

Ellison did a marvelous job of making me empathize with the invisible man. I was angry at the injustice he faced, and stung bitterly by those who betrayed him. Ellison uses brilliant and subtle symbolism, such as Jack. Jack was a white leader in the Marxist brotherhood and a supposed friend and ally of the invisible man. Not until near the end of the story is the narrator aware that Jack has a glass eye. I think it symbolizes that Jack could see the narrator, and yet not see him. The leaders of the brotherhood never really saw African-Americans as brothers, they were assets used, and sometimes sacrificed to their own agenda. Similarly, the fact that the narrator was unaware of Jack’s half blindness symbolizes his own blissful ignorance that he was being used.

Overall, a great novel. It wouldn’t be quite correct to say I enjoyed it. There was too much injustice and ignorance left unanswered. But it is powerful and compelling, and also somewhat outside my comfort zone. Not the sort of novel I’d pick up on my own if it wasn’t on the list. I’m glad it was.

I was particularly happy, that in spite of the gross injustices he suffered, the invisible man remained hopeful.

But the world has become one of infinite possibilities. What a phrase - still it’s a good phrase and a good view of life, and a man shouldn’t accept any other; that much I’ve learned underground. Until some gang succeeds in putting the world in a strait jacket, its definition is possibility.

Film Renditions: As I understand it, Ellison would not allow a film to be produced. There is supposedly a documentary about Ellison with dramatic portrayals of certain scenes interspersed, but I have not seen it.