Why did I wait 25 years? I'm Cheap. But I finally realized PCs aren’t cheaper if you replace them every 2-3 years. Now, I know the jury is still out. My iMAC hasn’t gone the distance yet and proven it’s worth the premium. But if everyone whom I know, who has made the switch is right – I should still be using this machine 4, or 5, or 6 years from now. Stay tuned.

The packaging is even more user friendly.
Posted by Joseph at 10:02 AM No comments:

A meme reboot from February 2015: Pick a book published since 2000 and say why you think it will be considered as a “classic” in the future.

I don’t think I answered this the first time, so...

Reading mostly classics, I don’t read many published since 2000 – exactly one in fact in the first 70 of 100. And then of course, it’s already considered a classic. So it’s the obvious choice, but a worthy one regardless.

Atonement by Ian McEwan. The “why?” is simple. It’s superbly written, with a compelling theme, and believable characters.

Now that I’ve been faithful to the precise rules of this meme, I’m going to cheat a little and mention one other that comes close: American Pastoral by Philip Roth, published 1997. 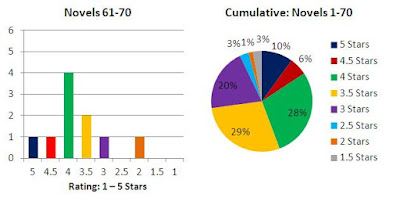 Favorite: The Count of Monte Cristo

Best Hero/Heroine: Princess Mary Bolkonskaya from War and Peace – she isn’t really heroic in the traditional sense, but she is the best person in any of these tales, and hence my choice.

Most interesting/Complex character: The Count of Monte Cristo aka Edmonde Dantes. Close second: a different count, from a different book, Count Pierre Bezukhov from War and Peace

Best Quotation:
…for the wicked are not so easily disposed of, for God seems to have them under his special watch-care to make of them instruments of his vengeance.  ~ The Count of Monte Cristo

Best Subtitle: Money: A Suicide Note  Opposite of a subtitle, Tom Jones is not the actual title of Fielding's novel, just a common shortened version of the full title: The Adventures of Tom Jones, a Foundling

Best film adaptation: I’m going to go out on a limb and say the 1963 rendition of Tom Jones (though I have not yet watched it). It won four Academy Awards, including Best Picture, and was nominated for 6 more.

Worst film adaptation: 2002 version of The Count of Monte Cristo
Posted by Joseph at 8:15 PM 2 comments: