2. The Prime of Miss Jean Brodie

That’s it; that’s the whole list. Unless I expand to novels partially in a school setting.

3. Lord of the Flies – bit of a stretch, but certainly the boys were being evacuated from a British school

6. A Portrait of the Artist as a Young Man

8. The Catcher in the Rye

9. Vanity Fair – it’s been a while, and I think very little, just the first part of the first chapter takes place in school, but it is a formative and shared experience of several of the main characters

I was about to stop; I didn’t have any more in my reading experience. But even though I haven’t read it, I think an obvious addition should be:

I first saw this tag at Risa’s Breadcrumbs, who got it from Jillian (I really can’t keep track of what Jillian calls her blog), who in turn got it from Shannon’s Reflections of a Reader ad infinitum. And now ***drumroll please*** The Wanderer’s response.

Question #1: an overhyped classic you really didn’t like
I’m tempted to say Ulysses, yeah ya know what? I’m gonna say Ulysses, but with a caveat. I will happily concede that Joyce is brilliant, perhaps the best read novelist I’ve read, and that his book is a rather astonishing achievement – but not an enjoyable read. And now that I’ve assuaged my conscience for disliking “the greatest novel of all time” I’ll add, I did like the only other work I’ve read by Joyce: A Portrait of the Artist as a Young Man

Question #2: favourite time period to read about
I don’t think I have a favorite period (what’s with the British spelling here anyway Shannon?) But I have read a couple recently about the Napoleonic era: War and Peace and The Count of Monte Cristo. I thoroughly enjoyed both.

Question #3: Favourite Favorite fairytale
I feel like The Lord of the Rings is cheating, but by Professor Tolkien’s definition somewhere in his authoritative essay On Fairy-Stories it fits the bill, so that’s my answer. Don’t complain to me; argue with Prof T. if you want – good luck with that.

Question #4: What is the classic you are most embarrassed about not having read?
Either The Epic of Gilgamesh or The Wind in the Willows. My understanding is they are pretty much the same story.

Question #5: Top 5 classics you would like to read soon
This one is easy, since I am on a schedule. The next 5 will be:
Atlas Shrugged
Great Expectations
The Fountainhead
The Wings of the Dove
Les Misérables


Question #6: Favourite Favorite modern book/series based on a classic
I got nothing.

Question #7: favourite Favorite movie / TV series based on a classic
OK, so I’ve already shown myself a Tolkienophile, but the LOTR movies were superb (The Hobbit, not so much). A few others that are excellent:
--Gone with the Wind
--The Grapes of Wrath
--Beloved
(I didn’t mention year/version as I’m pretty certain there is only one film
rendering – and let’s hope it stays that way.)
And as Monte Python would say – now for something completely different – I’m also going to mention Apocalypse Now which is based on Heart of Darkness, though the period and setting is completely changed. The film is a masterpiece.

Question #8: Worst classic-to-movie adaptation
There are quite a few awful adaptations: Animal Farm (any version), Lord of the Flies (any version), The Count of Monte Cristo (2002 PLEASE – don’t watch this), The Scarlet Letter (1995, ugh), but the Grand-Prize Winner, worst adaptation
Dune (1984) Very unfortunate as this is arguably the Gold-Standard of Sci-Fi novels.

Question #9: favourite Favorite edition(s) you’d like to collect more classics from
I have hard-cover editions of all the Classics I read. The Everyman’s Library editions are my favorites. I don’t like the dustjackets, which merely have a picture of the author, I prefer some scene or impression of the story, as in the Penguin Classics, but otherwise the binding, print, paper, and attached silk book marker are excellent.

Questions #10: An under hyped classic you would like to recommend to everyone
Invisible Man
The Heart is a Lonely Hunter

This is not from the original tag – I’m adding it, cuz it’s my blog and I can. Questions #11: A Classic film that is better than the book
Because we all know the book is better than the movie, but there is one classic that stands out as the exception:  The Godfather 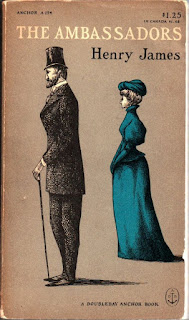 The great church had no altar for his worship, no direct voice for his soul; but it was none the less soothing even to sanctity; for he could feel while there what he couldn’t elsewhere, that he was a plain tired man taking the holiday he had earned. ~ Lambert Strether regarding Notre Dame Cathedral

This is the first time I’ve read The Ambassadors or Henry James.  The novel is the third-person narrative, told in realist style, and at times is nearly stream of consciousness.  The story is told exclusively from the point of view of Lambert Strether who is sent to Paris, by his wealthy fiancée, to persuade her son to return to Massachusetts and take up his responsibility in the family business, probably taking place in the very early 1900s.

Henry James is one of the most prolific authors on my list with 4 novels in the top 100, and 3 more in the next 250. I thought it was surprising that in spite of so many works making the list, this was his highest at #71. Nevertheless, I was impressed with his numerous “Great Novels” and I was looking forward to my first experience with James. To be perfectly honest, I was quite disappointed.

If I were to sum it up in one word, it would be “pretentious”.

I am going to reserve judgment on James as a whole though, as I have read he had 3 distinct styles: James I, James II, and The Old Pretender. The Ambassadors, one of James’ later works, falls under that last label. I will experience James’ earlier styles later, perhaps I will find them more enjoyable.

I thought the premise of this story was promising. The main character, Lambert Strether, is sent to Paris on a mission by his widowed fiancée, Mrs. Newsome. He is to retrieve her wayward son, Chad Newsome, and bring him home to run the family business. The precise nature of the business is never explained, only that it involved the manufacture of some “little nameless object”.

Strether travels to Europe with his friend Waymarsh. I was never clear why Waymarsh came along, and he never seemed to be of much help. During a layover in England, Strether meets American expatriate Maria Gostrey. The two are immediately drawn together and into one another’s confidence. I was never clear why these two became such fast friends. Strether and Waymarsh set off for France, and before long Maria follows.

Once in Paris, Strether finds Chad, and the two have a tête-à-tête to discover one another’s motives. Chad knows why Strether has come and is cheerfully defiant that he shall ever acquiesce. Strether learns that Chad is keeping company with Marie de Vionnet and her daughter Jeanne. Strether is uncertain which of the two is keeping Chad in Europe.

I won’t synopsize the entire plot. Chad is not eager to leave, and Strether begins to understand why. He finds Chad much improved for his European sojourn and eventually feels it would be a shame for Chad to leave. Strether’s failure to achieve his mission results in the arrival of more of Mrs. Newsome’s “ambassadors”.

I’m getting sick of this novel all over again trying to review it. I have two main complaints. Everyone, describes everyone with every ridiculous superlative, every time. Chad calls Strether magnificent; Strether calls Marie de Vionnet exquisite; Maria Gostrey describes someone – everyone as superb; everyone call Mrs. Newsome incomparable, impeccable, extraordinary;  friends of Chad’s friends call his friends charming, someone else calls somebody flawless, others are lovely, splendid, peerless, elegant, sublime. Marie de Vionnet once even calls Chad infinite.

It’s as if James is trying to convince the reader, through his characters – that he’s created fascinating characters.

I found them ridiculous and barely interesting.

And then the dialogue: It was pretentious and smug, and it didn’t matter the speaker. They all seemed to delight in paradox, saying things that made no sense, or contradicted, satisfied of their brilliance by the incomprehensibility of their words.

An example between Strether and Maria Gostrey, about Marie de Vionnet

“There were moments,” she explained, “when you struck me as grandly cynical; there were others when you struck me as grandly vague.”Her friend considered. “I had phases. I had flights.”“Yes, but things must have a basis.”“A basis seemed to me just what her beauty supplied.”“Her beauty of person?”“Well, her beauty of everything. The impression she makes. She has such variety and yet such harmony.”

And it isn’t just me. Edith Wharton, who admired Henry James, used the very word “incomprehensible” to describe passages of James’ writing.

Make it three complaints. I might have hoped, in spite of the pretentious dialogue and insipid characters, this novel would be about the allure of Paris. But no. It could have taken place in Hoboken.

I know there is some convention for calling this a blogoversary, but etymologically, that doesn’t make sense.

Anniversary is the combination of the Latin annus (year) + versus (turning) = yearly turning, or yearly return of a specific date. So, blogoversary makes no sense – there is nothing in the term to denote annual. It just means blog turning.

If you choose to mark your blog anniversary with a blogoversary, feel free. I just can’t do it. It should be textuscriptus anniversarius  (Latin textum (web) + script (record, log) + annus (year) + versus (turning))

Today marks the 5th textuscriptus anniversarius of The Once Lost Wanderer. I forgot to make any special note in previous years, which is not nearly as serious as forgetting one’s wedding anniversary. I am told the best way to remember that – is to forget it once – but I have not tested that theory (36 years and counting).

Anyway, 5 years today. It’s been fun. A very few of you may remember when this blog was called The 100 Greatest Novels of All Time (and my quest to read them)

That title was descript, but not very creative. Inspired by so many bookish blogs with wonderful, lyrical, imaginative names, I changed the name to The Once Lost Wanderer which is derived from two poems: Amazing Grace (more commonly known as a hymn) by John Newton and All That is Gold Does not Glitter by J.R.R. Tolkien. Like Newton, I once was lost, but now I’m found – though I still like to wander, and as Tolkien asserts, not all those who wander are lost. I like to wander:  through secret places of Middle Earth, courts of Imperial Russia, grand plantations of the antebellum South, the inner sanctum of a mad scientist’s laboratory, through deepest seas, farthest planets, and the occasional insane asylum.

Can you name the novels to which these descriptions apply?

I’m 70% through my quest, and in case you’ve wondered what I’ll do when it’s complete – I’ll just keep going. My list actually goes up to 350, so I’ll keep reading, though at a more leisurely pace and not so exclusively. I’ve forsaken most other literature during the quest, and I will take more detours once I’m done with 100. I may restart another quest that I forsook – to read a biography of every non-living American President (cuz the living one’s stories are not finished).

And – sometime after the 100 I hope to start writing MY novel.