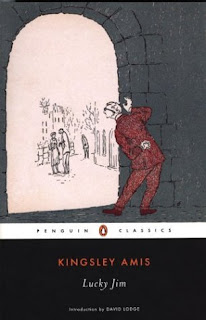 "...he had no charts for these waters, but experience proved that it was often those without charts who got the furthest." ~ Narrative regarding the title character, James Dixon

This is the first time I’ve read Lucky Jim or Kingsley Amis. The novel is the third-person narrative about several weeks in the life of James Dixon, a teacher at an unnamed English university, circa 1950. It is comedy/satire and a very early, perhaps the first, campus novel.

This novel satisfies square B2 of 2015 Classics Bingo: Comedy, Humor, or Satire Classic

Jim, or Dixon, as the narrator most often refers to him, is an untenured lecturer in the history department – untenured being key. He is a man of mediocre talent and ambition, even by his own estimation. Several gaffes in his early career leave his position at the university in question, and in the hands of the department head, Professor Welch. Welch is pedantic, aloof, and easily befuddled. Worried about his future Dixon is humble and gracious towards Welch, while he secretly holds him in contempt and fantasizes about smashing him in the face. Truthfully, Dixon holds most of his acquaintances, including his sort-of girlfriend Margaret, in contempt and is equally two-faced. But if Dixon despises Welch, it is nothing compared to the hatred he has for Welch’s son Bertrand. Bertrand is a pretentious artist, of no significance, convinced of his own genius.

For a moment he [Dixon] felt like devoting the next ten years to working his way to a position as art critic on purpose to review Bertrand’s work unfavourably.

Dixon’s life seems to take on three callings: to secure his future at the university, to defeat and deflate Bertrand, and to win the heart of Bertrand’s girl, Christine. The last of course is conveniently complementary to Bertrand’s demise, but both seem to work at cross purposes to his career. Bertrand is Prof Welch’s son remember.

Somehow, the reader begins to discern, (perhaps by seeing how few pages are left), that all three will turn on the merits of a lecture Dixon is set to give on “Merrie England”.  To steel his nerves, Dixon gets slowly drunk before the lecture – But Dixon is Lucky Jim after all, and the disaster of the lecture…

I liked this novel quite a bit. I was torn between 3 1/2 and 4 stars, but I just don’t quite see it in company with my 4 star novels, so it’s 3 1/2 with apologies to Mr. Amis. He somehow managed to make Dixon likeable, probably by making the other characters even worse human beings. They were all rather funny though – and I’ve known every one of them at some point in my life.

Dixon’s efforts on behalf of his special subject, apart from thinking how much he hated it, had been confined to aiming to secure for it the three prettiest girls in the class…

Narrative describing Dixon’s hangover: Dixon was alive again. Consciousness was upon him before he could get out of the way; not for him the slow, gracious wandering from the halls of sleep, but a summary, forcible ejection. He lay sprawled, too wicked to move, spewed up like a broken spidercrab on the tarry shingle of the morning. The light did him harm, but not as much as looking at things did; he resolved, having done it once, never to move his eyeballs again. A dusty thudding in his head made the scene before him beat like a pulse. His mouth had been used as a latrine by some small creature of the night, and then as its mausoleum. During the night, too, he’d somehow been on a cross-country run and then been expertly beaten up by secret police. He felt bad.

Dixon’s method of getting over a hangover: He got up and began a skipping-with-arms-raising exercise he’d learnt all about in the R.A.F. Five hundred skips and raising of the arms had helped to clear his head before. After a hundred and eighty an unclear head seemed much preferable to more skips.

Those who professed themselves unable to believe in the reality of human progress ought to cheer themselves up, as the students under examination had conceivably been cheered up, by a short study of the Middle Ages. The hydrogen bomb, the South African Government, Chiang Kai-shek, Senator McCarthy himself, would then seem a light price to pay for no longer being in the Middle Ages.

While he was using the lavatory, he began making his Evelyn Waugh face, then abandoned it in favour of one more savage than any he normally used.

Dixon felt a slight stab of conscience at having rather let Welch down over the lecture, and a less slight one at having spent so much of his time and energy in hating Welch.

It’s not that you’ve got the qualifications, for this or any other work, but there are plenty who have. You haven’t got the disqualifications, though, and that’s much rarer.

Can you judge a book by the title?


We all know you can’t judge a book by its cover. Although, I’ll say the cover to the very first edition of The Lord of the Rings I ever read is pretty awesome – but I digress.

The point here is, can you judge a book by the title? I’d still say no, but I really like the following titles (from the 350 GreatestNovels). Some I’ve liked, some I’ve disliked, some I’ve yet to read, but all have wonderfully appealing titles.

But the easy winner is If on a Winter’s Night a Traveler. It’s romantic, and mysterious, and has three powerfully evocative words. And to top it off, the author has a magnificent name – Italo Calvino. He must have to beat the women off with a stick.

So happens, I’ve read If on a Winter’s Night a Traveler. It’s quite unusual, and very good. I’ll get around to a reread, and posting a review eventually.
Posted by Joseph at 6:59 PM 8 comments:

“For a moment he felt like devoting the next ten years to working his way to a position as art critic on purpose to review Bertrand’s work unfavourably. He thought of a sentence in a book he’d once read: ‘And with that he picked up the bloody old towser by the scruff of the neck, and, by Jesus he near throttled him.’ This too made him smile.” ~ thoughts of the title character James Dixon

from Lucky Jim by Kingsley Amis

Teaser Tuesdays is a weekly bookish meme, hosted by MizB of A Daily Rhythm.

Anyone can play along! Just do the following:
• Grab your current read
• Open to a random page
• Share two (2) “teaser” sentences from somewhere on that page
• BE CAREFUL NOT TO INCLUDE SPOILERS! (make sure that what you share doesn’t give too much away! You don’t want to ruin the book for others!)
• Share the title & author so that other TT participants can add the book to their TBR Lists if they like your teasers!
Posted by Joseph at 2:52 AM 5 comments:

This week's topic: Ten Characters Who Are Fellow Book Nerds (love reading, are writers, work at a bookstore, etc.)

Bilbo Baggins who actually wrote There and Back Again: A Hobbit’s Tale (later known as The Hobbit) and most of The Lord of the Rings

Don Quixote of course, who was driven insane by reading tales of chivalry

Emma Bovary from Madame Bovary – She reads novels
I seem to remember nearly identical words of Anna Karenina, but I am not certain, so I won’t count Anna.

Stephen Dedalus from A Portrait of the Artist as a Young Man read numerous pieces of classic literature, and goes on to be a writer (generally considered to be Joyce’s alter ego)

Claudius from I, Claudius is a writer of history, besides being Emperor of Rome

John Shade author of the poem Pale Fire, and central character of the novel Pale Fire

Philip Carey from Of Human Bondage read quite a bit as a child (and is considered by the Wanderer at least to be Maugham’s alter ego)
Posted by Joseph at 2:51 AM 9 comments: