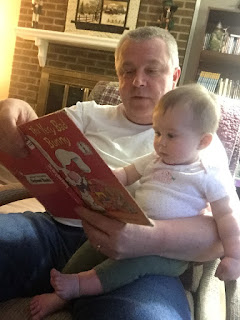 My youngest grandchild, and only granddaughter Alathea decided to join her brother and cousins in providing a guest book review for Grandpa’s blog.

As was the case with Andrew’s first book review, Alathea cannot yet speak, but I believe I have conscientiously represented her opinion by inferring from her expressions, gestures, and sounds.

The Very Bad Bunny by Marilyn Sadler, illustrated by Roger Bollen, is a third person narrative of P.J. Funnybunny, the picaresque hero of the tale.

Alathea was excited to hear the main character’s name, thinking it signaled an aptronym. This allayed a rather dark sense of foreboding she felt from the title. But alas, P.J. was not very funny at all and the book does indeed take a dark and sinister twist. Alathea wants to be clear however, that the title most definitely does NOT refer to P.J. who was by no means a very bad bunny.

P.J. was simply a bit clumsy and careless as children often are. He created small inconveniences for his family, by accidentally spilling, breaking, or ruining things. Alathea found this aspect of P.J.’s character resonated deeply with her, as she sometimes slobbers rather excessively on her brother Andrew’s toys. She doesn’t try to make them icky, and she certainly isn’t being bad – just a child. She is confident she will grow out of it.

P.J. does have one moment of willful disobedience when he throws his pillow out the window. Alathea is no apologist for P.J. His behavior was wrong and he knew it, but he’s only human – ermmm??? anthropomorphized leporidae after all. 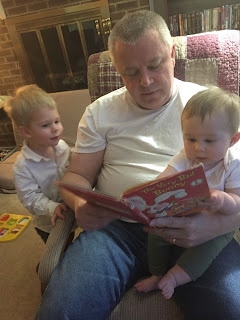 But the real drama in the tale starts when P.J.’s cousin Binky shows up. Binky is a true terror and intentionally naughty. And suddenly P.J. wasn’t so bad. When Binky finally leaves, P.J.’s family is so happy they hoist P.J. on their shoulders and everyone is happy.

In spite of the illustrator’s portrayal of this as a heartwarming, joyous occasion, Alathea is concerned it could send the wrong message to some young readers – that it’s OK to be bad, as long as you are not quite so bad as the next guy (or bunny in this case).

Alathea is thankful her behavior is not judged in comparison to that of her cousins Luke or Judah. She believes that there is right – and there is wrong. They are the standards by which we should be judged. Alathea felt the ephemeral nature of the Funnybunny’s conspicuously dualistic ideology will only lead to confusion and disappointment for P.J. if he is not subjected to a more assessable paradigm.

Still, Alathea thought the bunnys were cute, even Binky, though she feels he needs some tough love. She was glad for the happy ending. She likes P.J.

Oh, and Andrew couldn’t help but peek in. He feels that now that he’s reading Tolkien (Mr. Bliss) these types of books are rather childish. He just wanted to see the bunnies.

Click HERE for more book reviews by my Grandsons and Granddaughters.
.
Posted by Joseph at 7:35 PM 5 comments:

When possible, I like to watch a film rendition after completing a classic, and I include a brief comment at the end of my book review. However, I’ve fallen behind a bit, and just recently got to film adaptations of four of my books from last year – three of which were of major tomes.

War and Peace: 1956 starring Audrey Hepburn and Henry Fonda. I was pretty skeptical that a single film could do this justice, but this was a pretty decent adaptation and the 3 ½ hour length helped. It was a little light on War, both in how much of the film portrayed the war, as well as how it portrayed war. The war scenes should have been epic – cast of thousands – but it looked like they tried to cut costs with a cast of hundreds. But I’ll forgive it. It isn’t the most compelling part of the story, and the rest of the film adaptation was pretty faithful. It cut some parts down considerably, but the man themes – the lives of Pierre (Fonda) and Natasha (Hepburn) were pretty complete.

Great Expectations: 2012 starring Jeremy Irvine as Pip and Holliday Grainger as Estella is faithful to the book, well cast, well portrayed. I’m usually not a fan of film adaptations of Dickens, but this was quite good. Ralph Fiennes as Magwitch was especially good.

Tom Jones – I watched two versions: 1997 A&E / BBC 5 hour television mini-series was pretty good, but I expected to prefer the 1962 film with Albert Finney as Tom and Susannah York as Sophie.  It won the Academy Award for best picture after all and four other Oscars, and five more nominations including Best Actor for Finney. I am apparently no film critic, but I thought it was rather awful. As usual in my experience, BBC does a better job with Fielding, Austen, Dickens.

Have you seen any of these films? Can you recommend a better version?

Our local library was having a fundraiser with a big sale of old and rare books – these were not library copies, but books people donated for the fund raiser. I picked up a circa 1940s edition of Alice in Wonderland for my daughter, $1 and a two-volume, 1967 edition of The Annotated Sherlock Holmes (4 novels + 56 short stories). The box is in fair condition, but the books themselves are in very good condition. $8. 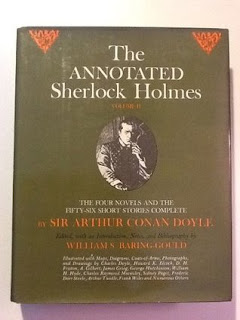