Modern Art - What do you see? | NOVA this Week

I won’t be finishing my current reads in the next week, and since I haven’t done NOVA this Week in forever (479 days), I thought this as good a time as any.

I was in a public building recently, that had a display of modern art. I was looking thoughtfully at one piece when I colleague asked, "what do you see?" I was caught unprepared and replied, "nothing really." I hate being caught unprepared...so, I've prepared…for next time.

Top 10 responses for What do you see? [in modern art]

10. Diogenes eating a waffle
9. The cold excess of capitalism
8. Brother Love's Traveling Salvation Show
7. A snow leopard perceiving its reflection in a pool of water
6. Chaos as a metaphor for self-perception
5. Antediluvian man holding a gourd
4. The Millennium Falcon making the Kessel Run
3. The Muffin Man
2. Passionate indifference
1. A psychedelic minstrel levitating an evanescent enclave tentatively perceived as a cosmic Gordian Escher knot

Wanderer’s further commentary: I don’t believe all modern art is bad, but I do think it is easy to foist off works that lack artistry as such. Or, as Sir Tom Stoppard put it…

Skill without imagination is craftsmanship and gives us many useful objects such as wickerwork picnic baskets. Imagination without skill gives us modern art.

Riders of the Purple Sage by Zane Grey (novel #143) 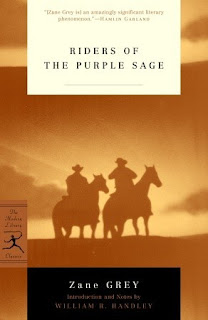 That hour at the entrance to Deception Pass had been the climax of her suffering – the flood of her wrath – the last of her sacrifice – the supremity of her love – and the attainment of peace.

Riders of the Purple Sage is of course a Western, by one of the quintessential authors of the genre, Zane Grey.

I’m sure I’ll catch grief for this, but I was disappointed. It felt like a guilty pleasure more than literature. So, on the plus side, let me acknowledge that it was a pleasure. It was fun, exciting, riveting, and satisfying.

But I felt a little cheated. First, I’m not sure how much Zane Grey really new about cowboys or horses. I’m no expert myself, though I did have a beautiful, gentle mare in my youth. There were several items that gave me doubts about Grey’s knowledge of horsemen of the wild west. Second, and this was quite distracting, he uses the word “sage” hundreds of times – literally hundreds. It was absurd. “Riders” and “purple” popped up over and over again, leaving me convinced that this was an intentional motif of the author, but it just seemed ridiculous. Finally, each one of the four main characters had moments when their behavior was completely unbelievable to me.

Sounds like I hated it right? Well, no! I’ve said before that a good story is more important to me than perfect writing – and this story is captivating. Set in Utah Territory, 1871, it concerns beautiful and wealthy Jane Withersteen who is befriended by near outlaw Lassiter as she fights to keep her independence from the churchmen of her Mormon faith. It’s filled with rustlers, stampedes, horse chases, gunplay, two separate love stories, and a pair of loyal dogs.

I want to give it juuuust a bit less than four stars, but three and a half is too low, so for the sake of the dogs, ya gotta love faithful dogs, I give it…
4 of 5 stars

I began this book once before, probably as a teen. I can’t recall what caused me to abandon it, but in spite of my criticism, I’m still glad to have read it and will read more by Zane Grey, though I think next in this genre I’ll try Louis L’Amour

I want to give Grey credit for a subtle allusion to classic lit. When two of the main characters realize their perfect hideout has been discovered – Grey describes their realization as…

Both had seen the footprint in the sand.

A clever allusion to Robinson Crusoe. 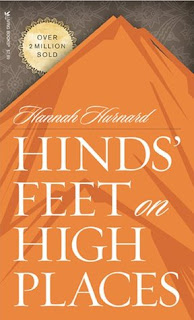 The Lord God is my strength, and he has made my feet like hind’s feet, and makes me walk on my high places. ~ Habaukkuk 3:19

Hind’s Feet on High Places is the tale of Much-Afraid and her journey to the High Places. Much-Afraid is crippled, deformed, and unattractive; she lives in the Valley of Humiliation with similarly miserable relatives such as her aunt Dismal Foreboding, cousins Gloomy and Spiteful. Most of all, she is plagued by her cousin Craven-Fear who intends to make Much-Afraid his wife, even against her will.

But Much-Afraid senses that her life should be something more meaningful. She has one friend, the Good Shepherd, whom she meets daily at the trysting place. She speaks to him of her desire to leap on the mountain heights like the wild deer. The Shepherd promises to help her reach the High Places, and make her beautiful and whole, if she will but trust him.

She is beset by fears and doubts, reluctant to set out on such a hazardous and impossible journey, but she does eventually trust the Shepherd and he plants the seed of love in her heart, an initially painful process, which immediately produces resolve and hope.

The Good Shepherd provides companions for Much-Afraid – companions she is none too glad for – Suffering and Sorrow.

The journey is begun, but indeed not without suffering and sorrow. At each difficulty however, Much-Afraid learns to lean more completely upon the Good Shepherd and he brings victory and a new lesson.

Hind’s Feet is a Christian allegory, describing the journey from unbelief to childlike faith, to mature faith, to faith that serves others.

The High Places, are not to be mistaken for Heaven, but rather the place of submission and obedience that produces peace and joy, and a servant’s heart. Much-Afraid is given a new name, Grace and Glory, and in her rapture, she thinks of her suffering relatives and countrymen in the Valley of Humiliation. She determines to return to the valley, along with her companions who have been transformed to Peace and Joy, in order to share the hope and good news of the Good Shepherd’s transforming love (the Christian’s Great Commission).

I look forward to reading more of this tale, in the sequel: Mountains of Spices. 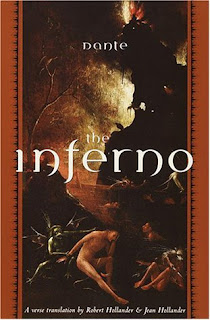 ABANDON ALL HOPE, YOU WHO ENTER HERE.

Inferno is the first part, of Dante’s epic poem The Divine Comedy, which is followed by Purgatorio and Paradiso. It describes Dante’s journey through Hell, guided by Roman poet Virgil. It isn’t precisely clear why Dante is appointed to this journey – only that he is appointed by divine will, and Virgil is his guide, presumably because Virgil, now only a shade, has made the journey himself, and is much revered by Dante.

Hell is described as nine circles. Less serious crimes are punished less severely in the higher levels and as Virgil and Dante descend they discover more heinous criminals and greater punishment culminating in the ninth level, the lowest pit of Hell, where they encounter infamous traitors Judas, Brutus, and Cassius, who are tormented by the chief of traitors Satan himself.

At the very outset, before entering the netherworld Dante writes…
In middle of the journey of our days
I found that I was in a darksome wood
The right road lost and vanished in the maze.

I particularly like this, as he uses first person singular “I”, after previously using the plural “our”. I believe this signifies both an individual and collective conscious and conscience.

JUSTICE MOVED MY MAKER ON HIGH.
DIVINE POWER MADE ME,
WISDOM SUPREME, AND PRIMAL LOVE.

BEFORE ME NOTHING WAS BUT THINGS ETERNAL,
AND I ENDURE ETERNALLY.
ABANDON ALL HOPE, YOU WHO ENTER HERE.

Each level of Hell is guarded a different demon. They challenge Dante’s right as a living soul to enter, until they are rebuked by Virgil…
Hinder not his destined journey.
It is so willed where will and power are one,
and ask no more.

And with that, they are suffered to pass.

In the early going, Dante feels pity for the souls he sees, but Virgil reminds him that the souls all enjoyed free will and a season to repent. Or, as one commentator put it…

…the time for mercy is here in this world, while in the world to come it is time only for justice. ~ Guido da Pisa

One of the more striking things about the punishment meted out, whether to the lustful or gluttons, violent or blasphemers, hypocrites or thieves, was that the punishment fit the crime. They were punished by their own vices.

As Hollander put it…

What they did above, they do below…

Or as the narrative describes…
And she to me: “There is no greater sorrow
than to recall our time of joy
in wretchedness – and this your teacher knows.

Or…
How many now above who think themselves
great kings will lie here in the mud, like swine,
leaving behind nothing but ill repute!

Or…
Every evil deed despised in Heaven
has as its end injustice. Each such end
harms someone else through either force or fraud.

Or…
Then my leader [Virgil] spoke with a vehemence
I had not heard him use before: “O, Capaneus,
because your pride remains unquenched

you suffer greater punishment.
In your own anger lies your agony,
a fitting torment for your rage.”

It was, as I said a grim, but fascinating read.

I often had to remind myself: Dante’s Inferno is literature, not Christian doctrine. And although there are a great many particulars on which I disagree quite strongly with Dante’s conception, there is a profound theme that I believe is true…

God is not mocked; for whatever a man sows, this he will also reap. Galatians 6:7

A word about this translation. I can only imagine that translating poetry is a tremendous challenge. I am not qualified to comment on the quality of this translation, but I can say I found it quite accessible, and I think the team makes good sense: Dante scholar Robert Hollander and his poet wife Jean Hollander. My unscholarly opinion: they did a marvelous job of maintaining the great power and terrible beauty of the message.

Finally, when I read Shakespeare, I keep watch for those little sayings of the Bard’s that have passed into modern English vernacular, such as Neither here nor there or Mum’s the word. I noted such a saying by Dante in Inferno. Virgil tells Dante he has not seen enough yet to form some opinion. Virgil’s words are (keep in mind the circles of Hell)

…you have not come full circle

Ironically, this saying, is misattributed to Shakespeare as he uses it in King Lear.