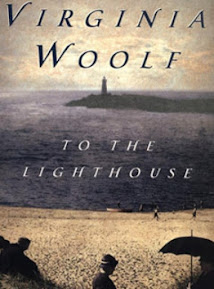 ...if you look from a mountain top down the long wastes of the ages, the very stone one kicks with one's boot will outlast Shakespeare.

This is the first time I've read To the Lighthouse or Virginia Woolf. The book is a Modernist novel written primarily in stream of consciousness. It begins in England prior to WWI, and covers several decades of the Ramsey family and acquaintances.

"The Window" gives the reader a glimpse into the lives of Mr. and Mrs. Ramsey, their eight children, and guests at the Ramesy summer home in the Hebrides sometime prior to WWI. One of the children hopes to make a trip to a lighthouse that is visible across the bay. His mother encourages him that they might go tomorrow, but his father dashes his hopes stating the weather will be too inclement. The child is bitterly resentful of his father, and even fantasizes about killing him. The Window reveals the duplicitous nature of the rest of the occupants, and the stark difference between their public face and private thoughts. Besides the Ramsey family, there is Charles Tansley an academic and admirer of Mr. Ramsey, Lily Briscoe, a young painter of no renown, Augustus Carmichael a poet of some import, William Bankes, a friend of the Ramsey’s, and Paul Rayley and Minta Doyle, who end up engaged, perhaps partially due to Mrs. Ramsey's matchmaking.

Time passes quickly in "Time Passes", which covers a period of some years. Several persons from "The Window" pass away and the house and property is vacant and neglected. A former housekeeper enlists help to restore things in preparation for the return of the former occupants.

"The Lighthouse" covers a single day. The house has been readied for the Ramseys and guests to return, though of course not all. Still the reunion has promise of something cheery and pleasant. There are plans to finish some long overdue business, and hopes to restore familial tenderness, or more precisely establish it…also long overdue. But this is no Hollywood sit-com reunion and Woolf is no writer of comedy. A single day, and simple gestures cannot amend for years of aloof detachment. There are a hundred clichés and ways to say it. Redeem the day at hand.

That's what I got out of it. Woolf likely intended some bright shining thought, some great beacon to illuminate the human experience, if you’ll pardon the pun, but I'm not sure what it is.

Though I'm not a fan of this story, one thing I did like: the way Woolf treated time with the three chapters, one day - many years - one day again. "The Window" and "The Lighthouse" were the real looks at the characters. The middle chapter, "Time Passes", is aptly named and just gives the reader hints of events that will have changed the remaining characters in the end. In more linear stories you may see characters change gradually over time, but this was like a leap forward in time. The characters were changed in what seemed an instant.

Overall, not a very cheery story though, and difficult to follow at times (a consequence of stream of consciousness). I did like the point of view of Lily in the final chapter. Something of an outsider, she is outside painting as she recalls the former days while observing the present.

One thing that struck me in the overall story was how astonishingly duplicitous the characters were in thought and deed. I know we all put on a public face, which can be quite different from our private thoughts. And I know it is difficult to be truly objective about oneself, but I don’t believe I am half so hypocritical as Woolf’s characters. I can only presume that to Woolf they seem quite normal. Perhaps I’m naïve, but I disagree.

The duplicitous family relationships are reminiscent of The Sound and the Fury.

Oh, but she never wanted James to grow a day older! Or Cam either. These two she would have liked to keep forever just as they were, demons of wickedness, angels of delight, never to see them grow up into long-legged monsters. Nothing made up for the loss. When she read just now to James, "and there were numbers of soldiers with kettledrums and trumpets," and his eyes darkened, she thought, why should they grow up and lose all that? He was the most gifted, the most sensitive of her children. But all, she thought were full of promise. Prue, a perfect angel with the others, and sometimes now, at night especially, she took one's breath away with her beauty. Andrew - even her husband admitted that his gift for mathematics was extraordinary. And Nancy and Roger, they were both wild creatures now, scampering about over the country all day long. As for Rose, her mouth was too big, but she had a wonderful gift with her hands. If they had charades, Rose made the dresses; made everything; liked best arranging table, flowers, anything. She did not like it that Jasper should shoot birds; but it was only a stage; they all went through stages. Why, she asked, pressing her chin on James's head, should they grow up so fast?

Did Nature supplement what man advanced? Did she complete what he began? With equal complacence she saw his misery, his meanness, and his torture. That dream, of sharing, completing, of finding in solitude on the beach an answer, was then but a reflection in a mirror, and the mirror itself was but the surface glassiness which forms in quiescence when the nobler powers sleep beneath? Impatient, despairing yet loth to go (for beauty offers her lures, has her consolations), to pace the beach was impossible; contemplation was unendurable; the mirror was broken.

Film rendition: 1983 made for television production starring Rosemary Harris and Michael Gough. Faithful rendition, well cast, and great locations, but like the book, not very exciting.