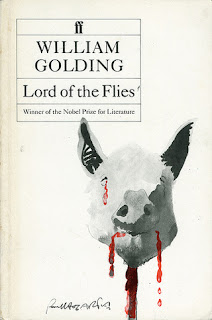 Ralph wept for the end of innocence, the darkness of man’s heart, and the fall through the air of the true, wise, friend called Piggy.

This is the second time I’ve read Lord of the Flies and the only work I’ve read by William Golding. The book is an allegory regarding the nature of humanity and tells the tale of a group of school boys, stranded on an uninhabited South Seas island.

Bravo Mr. Golding. Easily my favorite thus far. I read Lord of the Flies the first time just a few years ago, so I already knew I would like it, and it was better the second time. Oh, I don’t know where to begin, and should I begin, I think I might never end for all the powerful emotions and thoughts this masterpiece evokes. So, I will begin with a synopsis.

A group of “innocents” or boys ages 5 to 12, are stranded on a South Pacific island, after their plane crashes. There are no adult survivors and the time setting, somewhat vague, is around WWII. Two leaders emerge, Ralph and Jack. The boys elect Ralph their leader; Ralph, Jack, and some of the older boys establish order and discipline. Ralph revels in his position and views their plight as a grand adventure. He is mostly kind and just, and always keeps a sharp interest in survival and rescue. My heart ached for Ralph. He bore a responsibility no 12-year-old should ever bear. For the most part, he bears it well though imperfectly.

Illustration of Ralph blowing the conch from my 2003 Perigree Books edition. 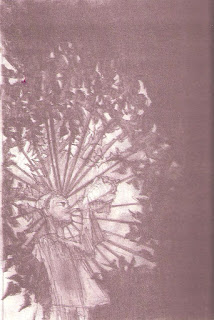 His chief supporter and confidant is Piggy, a fat, weak and be-spectacled asthmatic that is wiser than the rest, but impotent. He is often the subject of ridicule and scorn, even by Ralph.

Ralph’s leadership is immediately challenged by Jack. Jack has intelligence and charisma, but there are hints of cruelty and ambition. Jack defers to Ralph in the beginning, though he is clearly envious, and the reader expects treachery.

And then there is Simon, who at one point has a hallucinatory conversation with the lord of the flies, the head of a pig the boys put on a stake. The head is, of course, decaying and swarming with flies. Lord of the flies is also the literal meaning of Beelzebub.

As I said, the reader expects treachery from Jack and it comes full force. Jack is able to turn most of the boys away from Ralph, and two rival factions are created. They initially intend to co-exist, but the larger, stronger group begins to prey upon the weaker. Simon is murdered, though accidentally, and Piggy is murdered in cold blood. Finally, an island wide manhunt for Ralph is underway, and his murder is averted by the last-minute arrival of a British warship.

There is a brilliant bit of irony at the end. The crew of the ship spots smoke and fire on the island, which is part of the hunt for Ralph. Upon coming ashore to investigate, a naval officer sees the disgraceful condition of the boys and laments:

I should have thought that a pack of British boys...you're all British aren't you?...would have been able to put up a better show than that ...I mean...

A bit hypocritical, from the commander of a warship...I mean…

I believe Lord of the Flies is Golding’s expression of his world view, more precisely his humanity view: that humanity is NOT inherently good. I know that belief is unpopular, but life has taught me that popularity has nothing to do with truth.

He found himself understanding the wearisomeness of this life, where every path was an improvisation and a considerable part of one’s waking life was spent watching one’s feet. ~ Ralph

Soon, in a matter of centuries, the sea would make an island of the castle. I just love the truth and irony of the wording.

Film Renditions: 1963 British version was true to the book, but the production and acting was horrible. The 1990s version was better acted and better cinematography, but a drastic departure from the Novel, modernized (1990s) and Americanized. I don’t recommend either.