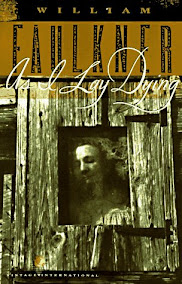 “I could just remember how my father used to say that the reason for living was to get ready to stay dead a long time.” ~ Addie Bundren

This is the first time I’ve read As I Lay Dying. It is a southern-Gothic, modernist novel, told mostly in stream of consciousness. Like most of Faulkner’s stories it takes place in or around Jefferson, Mississippi, Yoknapatawpha County, which is allegorical to Oxford, Mississippi, where Faulkner spent most of his life.

As I Lay Dying is the story of the Bundren family, the death of the matriarch, Addie Bundren, and the family’s agonizing journey to honor her last wish of being buried in her birthplace, miles away. Besides Addie, who is given voice in one chapter after her death, the other principal characters are: her husband Anse Bundren, three adult male children; Cash, Jewell, and Darl, seventeen-year-old daughter Dewey Dell, and adolescent son Vardaman.

The family sets out for Jefferson, Addie’s birthplace, in a mule-drawn wagon while Jewel rides a horse that he worked nights a full summer to buy. They set out after a heavy summer rain, and when attempting to cross a flooded river, the wagon is overturned; the mules drowned, and Cash breaks a leg. The wagon, coffin, and most of the belongings are saved, along with all the family, but they are forced to sell Jewel’s horse to buy a new team of mules and continue. While spending the night at a charitable family’s farm, Darl sets the barn on fire, probably hoping to burn the coffin and end the doomed trek. Jewel however, saves the livestock, wagon, and coffin. By the time they reach Jefferson, people are complaining about the smell, so Addie is quickly buried. There are remaining difficulties created by the trip. Cash’s broken leg was crudely set and gets proper medical attention much too late. Suspicion of arson follows Darl, and young, unmarried Dewey Dell is in a delicate condition, seeking desperate measures to cover her shame.

In the beginning, the reader tries to respect Anse for his devotion to Addie’s dying wish, but he just isn’t respectable. One commentator describes Anse as “one of the most feckless characters in literature”. I agree, though I had to lookup feckless. Anse sees himself as a victim, blames his children for the hardships of his life, and resents his obligation to Addie. After the burial, it becomes obvious he had ulterior motives for making the trip.

Cash is probably the most likeable. He struggles along without complaint and will likely be permanently lame. Similarly, Jewel is fairly likable. I felt his pain when they were forced to sell his horse. He was striving to rise up a notch or two in life, and was beaten down by his father’s stupidity. Dewey Dell is desperate and pitiable; the youngest, Vardaman is confused and pitiable, and Darl – well they’re all pitiable.

Faulkner uses an unusual technique. The characters are all ignorant, and most of the time their thoughts and dialogue are in uneducated country vernacular. However, from time to time, Darl or Vardaman’s thoughts are narrated with fine and elegant language, completely incongruous with the persons they are. I suppose this was to show there was something meaningful and lofty in their minds. I think bad grammar, or crude speech can create the illusion of a poor mind, when all it really indicates is poor education. I think Faulkner was showing these country folk were ignorant, not simple.

Film Rendition: 2013 film directed by James Franco, starring Franco as Darl is a very faithful rendition. The movie isn't any cheerier than the book, but as I say, it is a very good rendition. Tim Blake Nelson is perfect, and despicable, as Anse, and the rest of the casting is very good. Kudos to Franco for his effort to direct a literary classic. It did terrible at the box office, which in my opinion, is more an indictment of the movie going American consumer, than it is of the quality of the movie.