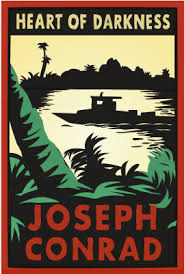 Destiny. My destiny! Droll thing life is - that mysterious arrangement of merciless logic for a futile purpose. The most you can hope from it is some knowledge of yourself - that comes too late - a crop of unextinguishable regrets. ~ Charles Marlow

This is the first time I’ve read Heart of Darkness or Joseph Conrad. The story is a novella by most standards, written in the realism style, and is the first-person narrative of Charles Marlow of his expedition up the Congo River sometime in the late nineteenth century, British imperial Africa.

Heart of Darkness is an interesting story and well told, but I'm a bit perplexed as to why it is considered great? I have a theory. The epic film Apocalypse Now, based on Heart of Darkness, is certainly considered a masterpiece, nominated for an Academy Award and Golden Globe Award for Best Picture. I believe most of the top novel lists that include Heart of Darkness were compiled well after Apocalypse Now was released. I suspect the novel may enjoy some acclaim due to the film. Just a theory, and don't misunderstand me; It's a fine piece of literature, I'm just not convinced it deserves such high honors.

Charles Marlow, is the steamboat captain leading an expedition up the Congo River. The expedition, a commercial enterprise of an ivory trading company, was to extract an important agent of the company, Mr. Kurtz, who was reportedly very ill, and becoming something of a rogue. Marlow, experiences bureaucratic and logistical delays before getting underway, and hazards on the trip as one would expect in late 19th Century Africa.

Marlow becomes obsessed with Kurtz, even before he meets him. This is partially explained as Marlow learns of Kurtz from others in the company. Some speak directly to Marlow about Kurtz, and at other times he overhears conversations not intended for him. Kurtz is the most successful of the company's agents, nearly a legend for producing more ivory than all the others combined. Like most successful people, he inspires jealousy in those desirous to supplant him, and praise from those seeking his favor, knowing he is destined for greater influence in the company. As a steamship captain Marlow is aloof to the political workings of other employees, but what he learns of Kurtz causes him to be fascinated by the enigmatic persona.

I found this a bit implausible. I can understand why others revered, feared, or despised Kurtz, but I found it unbelievable that Marlow was so easily impressed as he was otherwise rather pragmatic and stoic. When he finally meets Kurtz, Marlow is further impressed, as he realizes that Kurtz is something of a deity to the natives, and ruler of a small domain. He also perceives that Kurtz has gone mad. Marlow seems to vacillate between awe and contempt from this point. There's more, as you can imagine, regarding the journey back, but I will spare the spoiler.

There are underlying themes of civilization vs savagery, racism, and imperialism, but mostly issues we've moved well past by now. At any rate, I read for the story, not for the author's social commentary. So, excuse me if I don't delve further.

Marlow on reading a bit of Kurtz' writing regarding his life with the savages:

The peroration was magnificent, though difficult to remember, you know. It gave me the notion of an exotic immensity ruled by an august Benevolence.

Film Renditions: As I stated earlier Apocalypse Now, starring Martin Sheen and Marlon Brando is a modern adaptation of Heart of Darkness. The time and setting is changed to Vietnam and Cambodia, late 20th Century. I watched it again after reading the book, and I found the movie was indeed more powerful than the book. There is also a film based more closely on the book. I hope to watch that soon as well.