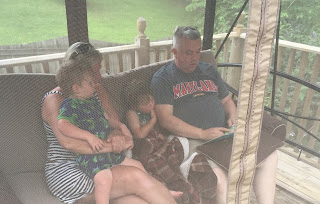 It is time for another guest book review by one of my Grandsons – make that two of my Grandsons as brothers Judah and Luke are submitting this collaborative review, of a book they read with Grams and Grandpa.

Judah and Luke did not quite agree on the theme. Luke felt it was a story about bears – and was fairly succinct because – he likes bears. Judah was a bit incredulous of Luke’s appraisal and felt that Luke likes bears, because the Berenstain Bears are not at all like real bears and Judah is confident that Luke’s opinion would be exponentially altered if he were to encounter one of the larger, and scarier variety of these impressive omnivores. More importantly however, Judah felt the theme was infinitely more complex than Luke, at his young age, could be expected to appreciate.

Judah believes the bears, the standard motif of authors Stan and Jan Berenstain, are simply mataphors for the human race, and the story an ingenious analogy to categorically repudiate gender stereotypes.

Judah recaps that two juvenile, unnamed bears, technically bear cubs, engage in a hypothetical romp, imagining the variety of professions, or occupations either a He Bear, or a She Bear could pursue. The bears imagine they can be: carpenters, merchants, firemen, policemen, doctors, teachers, cowboys, astronauts, etc. Judah was particularly gratified that one of the professions involved climbing poles. Judah has an extreme fascination with poles and climbing.

Judah was impressed. He felt the Berenstain’s were ahead of their time as the book was published in 1974. He didn’t feel it was patronizing political correctness, but rather a genuine and enlightened vision the Bernestain’s were proffering. He wondered if it was not perhaps rather avant-garde for its day though.

Luke opined that he liked the fish too. (One of the bears imagined being a marine biologist, and the illustration included numerous colorful fish.)