The Man Who was Thursday: A Nightmare by G.K. Chesterton (novel #104) 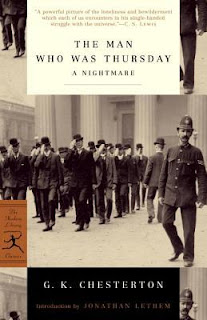 "…and no man should leave in the universe anything of which he is afraid." ~ Gabriel Syme

"The philosopher may sometimes love the infinite; the poet always loves the finite." ~ narrative

(update: July 13, 2018)
I reread this for the Back to the Classics Challenge 2018 Classic Crime story, and also because I promised myself to reread it – because in spite of liking it the first time, there was much I did not understand. I felt very much like the character from This Side of Paradise who is said to have liked it..."without understanding it."

I've gained a little understanding - I think - with this reread.

I believe it is very likely Chesterton’s allegory on the free will of humanity – and the cataclysmic resulting existence of evil. I think also, it may be a commentary on the Biblical book of Job – a book Chesterton was particularly fascinated by.

The greatest question of course, is who is Sunday? At first, the apparent villain. Later? Satan? – probably not, Christ? – possibly, but I think not, God himself? – again I think not, not entirely that is. I tend to believe Sunday is the natural world (the natural universe) – all creation. As such, he is an aspect of God the Creator revealed in Creation. But this is only the backside of the full Glory of God. As Moses was allowed to see only the backside of God, so do we all, along with Chesterton’s Six day-of-the-week inspired detectives, see the backside of God in creation.

I will have to read it yet again.

(the following is from my December 2016 review)
This is the first time I’ve read anything by G.K. Chesterton. The Man Who was Thursday is a detective novel, a metaphysical thriller, an adventure, and a fantasy. It is the third-person narrative regarding undercover police officer Gabriel Syme as he combats murderous anarchists in early 20th Century London.

Or, as the forward put it, it is

This book satisfies #8, a classic detective novel, of The Back to the Classics Challenge 2016. It is not part of the 100 Greatest Novels Quest.

For three-quarters of the book or more, I thought it was a farce, absurd but fun. The characters were likeable, but unbelievable and the plot was ridiculous.

Gabriel Syme is a poet policeman, who accidentally infiltrates a secret society of anarchists – dangerous felons to a man. By odd fate, Syme is elected to the high council of the anarchists, a group of seven, each codenamed for a day of the week. The enormous and imposing president is Sunday. Syme, as you can guess, becomes Thursday. The narrative reveals that Syme became a police detective accidentally as well, but now that fate has thrown him into the den of dynamiters, he intends to operate under cover, ultimately to bring the group to justice.

I’ll spare the spoilers, and just say it was all quite amusing, but a bit silly – until the end.

And then – the books turns and the reader – is being carried into much deeper waters than he had planned on… I was not expecting this, but I’ve learned it is not uncommon for Chesterton.

This was very deep, very philosophical, and very thought provoking. I will have to reread this, and think about it – perhaps the rest of my life. Yes really; it is that profound.

I am persuaded I must read more G.K. Chesteron.

There is a great deal to be said for death; but if anyone has any preference for the other alternative, I strongly advise him to walk after me. ~ Gabriel Syme