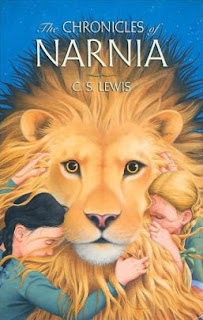 “Yes,” said Queen Lucy. “In our world too, a stable once had something inside it that was bigger than our whole world.”

I feel terribly inadequate as I attempt to express my thoughts and feelings of The Chronicles of Narnia.

“thoughts and feelings” being the key phrase, since for me, they are the measure of a great book. Did the author evoke profound thought or powerful emotion?

The Chronicles of Narnia is C. S. Lewis’ timeless masterpiece – timeless is probably a good third criterion for literary greatness – and again it passes the test. It may be characterized a number of ways: children’s fantasy – yes, though countless adults have enjoyed it; High Fantasy – mostly; Christian allegory – at least in part; symbolic; beautiful; frightful; joyful; powerful; triumphant – yes and yes!

This was my first read, though as a Christian, I was vaguely familiar with the allegorical theme. I have often been surprised, in the past, when I’d encounter non-Christians who enjoyed – even loved – The Chronicles of Narnia.

It surprises me no longer; it is testimony to the greatness and versatility of the author.

And to his love. Please forgive my maudlin sentiment, but I felt Lewis poured a lot of love into The Chronicles of Narnia.

In the only other work I’ve read by C. S. Lewis, Mere Christianity, I marked his ability to make complex ideas simple, and then to make the simple incredibly profound. There’s more of that in the Chronicles. I am far from being an expert on Lewis, but I have concluded he possessed an extraordinary mind.

The Chronicles of Narnia is composed of seven distinct novels – any of which can be enjoyed on its own – though I highly recommend reading them together, and in publication rather than chronological order. Reason? Simple, it is the order Lewis intended. He presumes the reader to know later Narnian history, when reading an earlier story.

(It’s a little like watching Star Wars in chronological order: you don’t get the stunning reveal that Darth Vader is Luke’s father.)

Wanderer’s commentary on the primary Christian themes of the seven tales (in publication order):

The Lion, the Witch, and the Wardrobe – Redemption of the lost
Prince Caspian – Corrupt religion restored to truth and purity
The Voyage of the Dawn Treader – The spiritual life
The Silver Chair – Good vs evil
The Horse and His Boy – The calling and conversion of the lost
The Magician’s Nephew – Creation of the world and the entry of evil
The Last Battle – Evil’s imitation of the benevolent creator, the final conflict, end of the old world, beginning of the new

Individually they are marvelous. Collectively they are beautiful and masterful. The Last Battle moved me to tears. Have you read The Chronicles of Narnia? In whole or in part? What did you think?

…Polly Added, “But we’re not quite as bad as that world, are we, Aslan?” “Not yet, Daughter of Eve,” he said. “Not yet. But you are growing more like it. It is not certain that some wicked one of your race will not find out a secret as evil as the Deplorable Word and use it to destroy all living things. And soon, very soon, before you are an old man and an old woman, great nations in your world will be ruled by tyrants who care no more for joy and justice and mercy than the Empress Jadis. Let your world beware. That is the warning. ~ Excerpt from The Last Battle

I’m currently reading Planet Narnia by Michael Ward which offers a compelling argument that Lewis hid more meaning in the Chronicles than most have surmised. Lewis may have been laughing down his sleeve at those, including his good friend Professor Tolkien, who thought the Chronicles were simple and incongruous. Planet Narnia is fascinating, and I’ll give a few, more technical, thoughts about both the Chronicles and Planet Narnia when I finish that book.