There are dark shadows on the earth, but its lights are stronger in the contrast.

I started reading The Pickwick Papers way back in March 2016, and just finished it in November 2017, but this long read is NOT because I am a slow reader. I read The Pickwick Papers as part of a 20 month read along, hosted by On Bookes, to commemorate the 180th anniversary of the first publication; it was published serially beginning in March 1836, 2-3 chapters a month, with no installment in May 2017. It was Dickens’ first novel, published under the pseudonym “Boz”.

First, thanks to On Bookes for hosting this unusual and fun read along. I am happy I stuck with it to the end. On Bookes researched and posted bits of trivia regarding what was going on in London as each installment came out – creating the feeling that we were reading it like the original readers. My understanding, that around chapter 10, and the introduction of Mr. Pickwick’s valet Sam Weller, The Pickwick Papers became perhaps the first great publishing phenomenon ever. 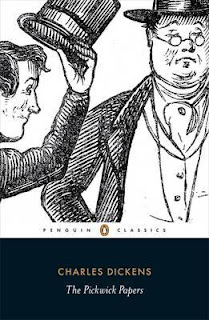 The Pickwick Papers is a farcical romp, definitely the most comic of any work by Dickens I’ve read. In short, it is the story of Samuel Pickwick, founder of The Pickwick Club, London 1827. Pickwick is a man with a “gigantic brain” and a passion for science, philosophy, art, and adventure, who according to his own description is “an observer of human nature”.

The Pickwick club, commissions Pickwick and three companions to set out upon a quest of sorts, to pursue adventure and discovery and to record said adventures for posterity. Pickwick’s three companions, Mr. Tracy Tupman, Mr. Augustus Snodgrass, and Mr. Nathaniel Winkle are each known for one particular passion which is their unique distinction: Tupman for an admiration for the fair sex, Snodgrass as a poet, and Winkle as a sportsman. These four receive hearty approval and commission from their fellow Pickwickians and set out in pursuit of the greater glory of The Pickwick Club.

The Pickwickians are all very decent chaps at heart, but all are a bit bombastic and Dickens delights in bringing them down a notch or two by ironic twists of fate and the clumsy do-goodery of the troop. I’ve alluded to one other principal character, Mr. Sam Weller, Pickwick’s valet. Sam is worldly wise and fiercely loyal to Pickwick and as you might imagine, more than once saves Pickwick and/or colleagues from embarrassing situation.

Of course, all comes right in the end. As Mr. Pickwick settles into a leisurely retirement, Dickens writes:

Let us leave our old friend in one of those moments of unmixed happiness, of which, if we seek them, there are ever some, to cheer our transitory existence here. There are dark shadows on the earth, but its lights are stronger in the contrast. Some men, like bats or owls, have better eyes for the darkness than for the light. We, who have no such optical powers, are better pleased to take our last parting look at the visionary companions of many solitary hours, when the brief sunshine of the world is blazing full upon them.

Although I enjoyed the read along format, this is not my favorite Dickens, but I can see how the serialization, and the resulting cliff-hangers would have created excitement and anticipation. There were a few months, when after finishing the allotted installment, I was tempted to read ahead. I never did though…Honest!

Trivia – near the beginning of Little Women by Louisa May Alcott, the March girls are acting out scenes from The Pickwick Papers.