The Idiot by Fyodor Dostoevsky (novel #113) 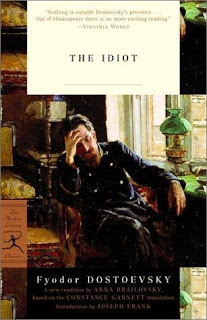 I made up my mind to be honest, and steadfast in accomplishing my task. Perhaps I shall meet with troubles and many disappointments, but I have made up my mind to be polite and sincere to everyone; more cannot be asked of me. People may consider me a child if they like. I am often called an idiot, and at one time I was certainly so ill that I was nearly as bad as an idiot; but I am not an idiot now. How can I possibly be so when I know myself that I am considered one? ~ Prince Muishkin

This is the first time I’ve read The Idiot and the third novel I’ve read by Dostoevsky. Due to my previous experiences and a peek at a synopsis, I was anticipating a very enjoyable read.

But no! I was quite disappointed. I really wanted to love this for both my admiration of the author and my interest in the premise: the story of a man so sincere, so kind, so artless, that he was thought an idiot by his acquaintances. The title character is Dostoevsky’s

Characters in the novel said of him:

You are more honest than all, and better, nobler, kinder, wiser than all. There are some here who are unworthy to bend and pick up the handkerchief you have just dropped. ~ Aglaya Ivanovna

I ought to tell you that I never in my life met a man anything like him for noble simplicity of mind and for boundless trustfulness. I guessed that anyone who lied could deceive him, and that he would immediately forgive anyone who did deceive him… ~ Nastasia Philipovna

To be astonished by nothing is a sign, they say, of a great intellect. ~ Hippolyte commenting on the Prince’s unflappable character

Besides wanting to love the novel, I also wanted to love the protagonist, Prince Muishkin, and I did – at first. But as the novel wears on, I confess I began to think him rather absurd myself, though not quite an idiot.

But most of the characters were absurd. Aglaya Ivanovna – the fickle and flighty love interest of the Prince; Nastasia Philipovna – her beautiful and bitter rival; Rogojin the vicious and vain antithesis to the Prince; Hippolyte the tedious and tubercular nihilist; Elizabetha Prokofievna the proper and passionate mother of Aglaya; and on and on.

Perhaps it suffered in translation, translation not of words, but translation of 19thcentury Russian society vs 21stcentury Western society – perhaps, but that can’t really explain it fully. I loved The Brothers Karamazov and Crime and Punishment after all.

Perhaps I’m the idiot, but this just didn’t work for me. I’m sorry brother D, but I feel I’m being generous to even give this…

I agree with that.

This novel satisfies – Back to the Classics Challenge 2018 – Category: a classic in translation.

In a word, the world spoke well of the girls; [Aglaya and her sisters] but they were not without their enemies, and occasionally, people talked with horror of the number of books they had read.
A fool with a heart and no brains is just as unhappy as a fool with brains and no heart. ~ Elizabetha Prokofievna
Exactly as is a mother’s joy when her baby smiles for the first time into her eyes, so is God’s joy when one of his children turns and prays to Him for the first time, with all his heart. ~ Prince Muishkin
Things are hidden from the wise and prudent, and revealed unto babes. ~ Lebedeff