Dream of the Red Chamber by Cao Xueqin (novel #114) 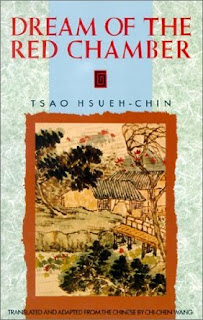 Your earthly destiny is fulfilled! Do not delay now, but follow us! ~ Buddhist monk and Taoist priest to Pao Yu

Dream of the Red Chamber (Hong Lou Meng), or The Story of the Stone (Shi Tou Chi), or

Written mid-18thCentury during the Qing Dynasty by Cao Xueqin (Tsao Hsueh-Chin), Dream of the Red Chamber is the most recent of China’s Four Great Classical Novels: [Romance of the Three Kingdoms, Journey to the West, Water Margin]. If there were an Eastern Canon, this would be part of it.

Which doesn’t bode well for Dream of the Red Chamber, since I nearly hated Remembrance of Things Past.

But Happily and surprisingly, I found Dream of the Red Chamber much more enjoyable and accessible. I have to make one confession though – I read an abridged version. I ordinarily refuse to read abridged versions, but the full version is like a billion pages. Additionally, there is great difficulty in translating this work; the full translation just doesn’t – ummm? – translate well. So much so, that my translation isn’t considered abridged, just a liberal translation. It’s still quite long – like a million pages (bit over 600 actually).

Dream of the Red Chamber is about the decline of the Chia clan, an aristocratic family, of two major houses: Ningkuo Palace and Yuongko Palace. It is thought to be semi-autobiographical and is largely a character driven story – and goodness, there are plenty of characters, 40 major characters and over 400 others. The main character is Chia Pao Yu, a young prince, probably around 14 at the beginning of the novel, of the Yuongko Palace who was born with a jade stone in his mouth. In a preface, the translator describes him as:

…a highly gifted but degenerate young aristocrat, a psychopath and a weakling, asocial, effeminate, plagued by inferiority complexes and manic depressions, who though capable of a temporary rallying of energies, founders among the demands of reality and slinks cravenly away from human society.

That’s about right. But somehow, I still liked him. His mother, and grandmother, the Princess Ancestress, spoil him, while his father terrorizes him, nearly beats him to death at one point – so he has some excuse for his foibles.

Between the two Palaces, there are countless cousins, siblings, half-siblings of concubines, and maids who are more familiar with their masters than is typical of Western domestics.

The other two main characters are female cousins, Black Jade and Precious Clasp. They are rivals for Pao Yu’s attention, though genuinely affectionate to one another. Again, the translator’s description:

When Pao Yu first meets Black Jade, the narrative of his impression is more poetic:

She was beautiful, but her beauty was clothed with the cloak of suffering. Her eyes were always glistening as if full of tears. And how faint and soft was her breathing. In repose she was like the dewy reflection of a flower in water. In motion she was like a willow branch trembling in the wind.

Early, I was pulling for Black Jade; with a name like Black Jade I couldn’t help but imagine her a rare beauty, but as time goes on, I found her insecure, simple, and needy. My hopes for Pao Yu turned to Precious Clasp, but no spoilers. Pao Yu was incredibly fickle, flirting with any and every female in the palace including his maids and half-sisters.

The title, is derived from a dream Pao Yu has early in the novel that foreshadows his life. It is filled with charming ethereal descriptions:

I am the fairy of the Fearful Awakening. I live not far from here in the Phantom Realm of the Great Void, in the Sphere of Banished Suffering, behind the Drenching Sea of Trouble, on the Heights of Liberated Spring, in the Grottoes of Everlasting Perfumes. I judge the Play of Wind and Clouds between human beings and settle the unbalanced debts of love between unhappy maidens and languishing youths. It is not chance but destiny which leads me to you today.

This language was fun and proper in the dream, but would have grown pretty tiresome if it pervaded the novel. It doesn’t.


As one might expect from an 18thCentury Chinese writing, there are mystical elements, such as the stone found in Pao Yu’s mouth at birth. There are other omens and occurrences that we would probably call magical realism – but I don’t think it correct to apply that label here. One of the more interesting such elements was a wandering and mysterious pair: a Buddhist monk and a Taoist Priest who showed up at various points, to offer sage advice, or prophetic warning, and who would then usually vanish.

I think they were probably representative of a spiritual message the author was conveying. The translator wrote:

From the Buddhist and Taoist points of view the answer might be: It is a story of the gradual awakening, purification, and final transcendence of a soul originally sunk in the slime of temporal and material strivings.

I enjoyed this read, though I didn’t quite love it, but it’s good to get out of my comfort zone, and it was interesting to learn about Imperial Chinese Aristocratic society. It was a reminder, that although we have very different ways and customs – people everywhere are remarkably similar.

This novel satisfies – Back to the Classics Challenge 2018 – Category: a classic with a color in the title. It also completes the 2018 Challenge.

From the Pao Yu’s dream, description of wine he is offered:

It is prepared from the pollen of a hundred flowers, the juices of a thousand plants, the marrow of uniciorns, and the milk of the phoenix, and it is called A Thousand Delights in One Goblet

And this I found curios. At one period of studious determination in Pao Yu’s life it says:

Early to bed and early to rise was the watchword now.

Curious, because it is an apparent quotation of Benjamin Franklin, who could have been known to the translator, but probably not the author.

Finally of note, at one point in the novel a play is enacted, portraying one of the earlier Great Chinese novels, Journey to the West.