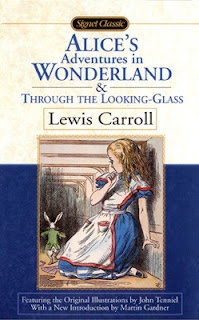 "Alice had begun to think that very few things were really impossible."

"…and what is the use of a book,” thought Alice, “without pictures or conversations."

Alice’s Adventures in Wonderland, commonly referred to as Alice in Wonderland, is a children’s story and literary nonsense – that’s not a description, but a genre – new one on me. 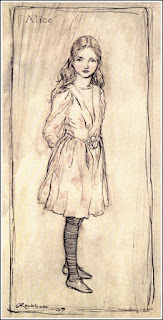 Though it’s a pretty apt description as well. I really should have read this as a child, though I wouldn’t have – it was decidedly, in my opinion at least, a girl’s book. Still I wish I had read it as a child, just to have a recollection of what I thought of it then, because as an adult I found it rather – meh.

It’s clever at times, cute at others, and absurd almost entirely. Although, I understand it may be less nonsense than it appears. There are reportedly mathematical concepts throughout, symbolism, and characters possibly mapped to persons great and small from Carrol’s day. Perhaps. I’m not inclined to investigate. 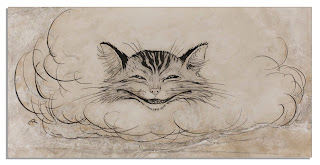 This all sounds rather critical, and I don’t mean it to. I think Alice’s adventures would probably be a fun diversion for a child. It just didn’t do much for me as a curmudgeon. Did you read Alice in Wonderland as a child? As an Adult? What were your reactions?

And the book DOES NOT answer the question/riddle posed by the Hatter;

I for one hate riddles without answers. So, let me answer this once and for all: a raven is like a writing desk, because Poe wrote on both. I wish I had solved that myself. I didn’t, but it’s the best answer I’ve heard.