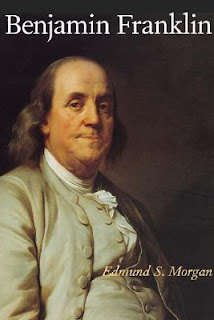 Much has been written of Franklin to let us know him, but there seems to be much yet that is unknowable.

I would rather have it said, he lived usefully, than He died rich. ~ Benjamin Franklin to his mother of his desired legacy

He certainly lived usefully. (though he also earned a small fortune is his lifetime by various endeavors.)

Benjamin Franklin was a writer, printer, scientist, inventor, politician, statesman, diplomat, philosopher, humorist, activist, and one of the most intriguing of America’s founding fathers.

There are dozens of biographies on Franklin, including his own unfinished autobiography. There is a vast record, public and private, written about him, perhaps more than any other founding father, which would take a lifetime to study. Morgan has done the study for the reader, though his biography is brief, it offers a mere sketch of this fascinating public figure.

But even this brief sketch reveals much. Franklin…

…never made a memorable speech

… had a personal aversion to controversy

…had a knack for meeting kings and beggars…

Even though he
…possessed an extraordinary intellectual curiosity

…wanted people to like him because he liked them.

Usefulness and right were almost synonymous for him

The most surprising thing I learned was how diligently Franklin worked to preserve the union between the American colonies and England.

What he most wanted was the Anglo-American empire

He saw the coming greatness of America and dreamt of a great and powerful union that would benefit America, England, and the world. His belief that the colonists should be treated as equal British subjects was constantly frustrated by short-sighted Parliamentarians who sought to subjugate Americans – not to England, but to Parliament.

He told the British more than once that they could gain more from Americans by not taxing them and would lose heavily by fighting them.

Of course, he made enemies in Parliament, but even there were great minds who respected Franklin – one of them being William Pitt, Earl of Chatham. When one blustery member of Parliament referred to Franklin (who was present), as

…he made no scruple to declare, that if he were the first Minister of this Country, and had the care of settling this momentous business, he should not be ashamed of calling to his assistance a person so perfectly acquainted with the whole of American affairs, as the Gentleman alluded to and injuriously reflected on, one, he was pleased to say, whom all Europe held in high estimation for his knowledge and wisdom, and ranked with our Boyles and Newtons; who was an honour not to the English nation only but to Human Nature.

Franklin was not an early advocate for independence. He worked to strengthen the union, then to preserve the union, then to reconcile the union – but once the break was made – his course was irreversible. He became the First American – the first to work for a united American nation, not a loose confederation of independent states.

I was surprised to learn John Adams and Benjamin Franklin did not exactly get along. Franklin felt that Adams confounded his efforts with the French, and Adams felt Franklin was entirely too much a Francophile. Franklin wrote of John Adams…

I am persuaded, however, that he means well for his Country, is always an honest Man, often a Wise One, but sometimes and in some things, absolutely out of his Senses.

But for the most part…

Wherever Franklin went people loved him.

A small sampling of what noteworthy persons had to say of Franklin:
…the greatest Statesman of the present, or perhaps any century. ~ Erasmus Darwin

…the Solon, the Socrates, and the Seneca of that day. ~ Francois Steinsky
…the first man of the universe ~ general French opinion

I’ll wrap it up with this profound thought, by this complex man…