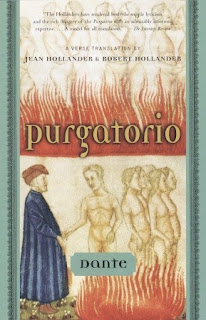 And he to me: “This mountain is so fashioned
that the climb is harder at the outset
and, as one ascends, becomes less toilsome. ~ Virgil to Dante regarding the climb of Mount Purgatory

Purgatorio is the second part of Dante’s epic poem The Divine Comedy; it follows Inferno and is followed by Paradiso. I suspect Purgatorio will be my least favored of the three, as it is caught in Limbo – pardon the pun – between despair and glory.

By the way, it isn’t really a very good pun. Limbo and Purgatory are not synonymous. According to Dante, Limbo is on the outskirts of Hell, inhabited by virtuous pagans and the unbaptized who are separated from God, but not condemned to the suffering of Hell. Purgatory is for souls who repented late in life, who must purge their souls for the years spent apart from the grace of God. They are considered “saved” as their eventual ascension to Paradise is assured.

Full disclosure: I am a Christian and believe in Heaven and Hell, but I don’t believe in Purgatory. This certainly tempered my reaction to Purgatorio as I was ambivalent to the souls in Purgatory. But, just as with Inferno, I remind myself that Purgatorio is literature, not Christian doctrine.

Virgil continues to guide Dante’s journey, but he is replaced by the end of Purgatorio by Beatrice as Virgil, doomed to Limbo, will never be admitted to Paradise. Beatrice is probably based on an actual person Dante admired, perhaps even loved, but in the Comedy, she is the representation of Beatific Love.

The souls in Purgatory are guilty of the same sins as those in Hell, but differ in that they repented late in life and claimed God’s grace.
Sinners to the final hour,
we were all at the point of violent death
when a light from Heaven brought us understanding

so that, repenting and forgiving,
we parted from our lives at peace with God,
who with desire to see Him wrings our hearts.

Their time in Purgatory is equal to their years of unbelief in mortal life, but can be shortened by the prayers of Christians in Heaven and Earth. Most fascinating though, was the concept that all sin is an aberration of love – that is: love perverted (pride, envy, wrath), love defective (sloth), or love excessive (avarice, gluttony, lasciviousness)

In Inferno, the nine levels of Hell descend into an abyss, whereas in Purgatory the levels rise as a mount. At the summit is the Earthly Paradise, not Heaven, but after purgation a place of innocence, very much like the Garden of Eden.

In the last several cantos of Purgatorio we learn how and why Dante was chosen for this journey. Beatrice, who has died and is Paradise, is distressed by Dante’s earthly life. During her life, Dante was apparently inspired to Godliness by Beatrice, but after her death, he quickly forsakes virtue and theology for pleasure and philosophy. Concerned for his immortal soul, Beatrice goes to Limbo and by her tears persuades Virgil, to guide Dante through the eternal realms, and thus affect his repentance.

Dante does indeed confess his sin, and is purged, just as the souls in purgatory. He is unique, in that he is yet mortal and at the conclusion of the Comedy must return to live out the remainder of his mortal, and presumably now, more faithful life.

One excerpt that I found quite poignant. Early in the climb, at a particular gate…

At that we moved ahead, The first step
was of clear white marble, so polished
that my image was reflected in true likeness

The second was darker than the deepest purple,
of unhewn stone, looking as if it had been burned,
cracked through its length and breadth

The third, resting its heavy mass above,
seemed to me porphyry, as flaming red
as blood that spurts out from a vein

The first step, forces Dante to see himself as he is – so critical to confession and repentance. The second step is dark and broken, revealing the sinful and broken state of Dante (mankind). The third step red, the color of spurting blood, like the blood of Christ.