The Tale of Genji by Murasaki Shikibu (novel #151) 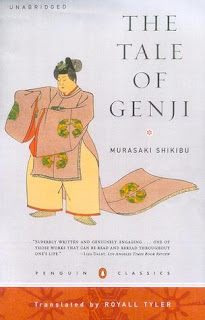 The successful and happy sometimes arouse envy, and sometimes they let pride and vanity have their way and bring unhappiness to others. It was not so with Murasaki…

I’m going to admit up front, I did not enjoy this novel – NOT AT ALL!, but I’m glad to have read it. I read mostly works of the Western World, so I am glad to get some exposure to Eastern literature. If there were an Eastern Canon, this would certainly be included. It is one of the most important Japanese works of literature, and by some standards, the oldest novel in existence, written early 11thCentury by Japanese noblewoman Murasaki Shikibu. It is possibly semi-autobiographical.

Most synopses say something about depicting the lifestyle of imperial courtiers in 11thCentury Japan, but it’s really mostly just about Genji, son of the emperor. Although Genji's mother was a favorite wife of the emperor, she was not politically significant, and Genji is not destined for the throne.

It’s a complaint of mine when people judge a book outside its historical and cultural context, so I tried to be fair to Genji. I understand that women were little more than ornaments in Genji’s day, and that Oriental customs are very different from Western mores, particularly in imperial courts, but still…this guy

Numerous dalliances as a bachelor – rank, privilege, and youth; OK. First marriage, a political match, not very interesting, but then…

He falls in love with the empress, his step-mother and fathers a child by her, whom everyone assumes is the emperor’s son. Next Genji meets a 10-year-old girl, whom he thinks is what the empress must have been like as a child…so he kidnaps her – yes kidnaps! He first “asks” if he can have her, but when the mother refuses, he scolds her for her cruelty and then takes the child anyway. He raises her, and eventually marries her. This is Murasaki, who may be based partially on the author. She becomes Genji’s favored wife, and that does seem to be genuine. It doesn’t deter him from numerous affairs. He scolds Murasaki when she is sometimes suspicious, even though her suspicions are completely warranted.

You seem so touchy these days. I cannot think why. I have not wanted to be taken for granted, like a familiar and rumpled old robe, and so I have been staying away a little more than I used to. What suspicions are you cherishing this time?

But Murasaki knows how to handle him. On a different occasion…

It was not hard for Murasaki to guess what had happened, but she gave no hint of her suspicions. Her silence was more effective than the most violent tantrum, and made Genji feel a little sorry for himself.

Later in life, he intends to groom a young girl as an acceptable wife for his son, but Genji eventually decides he should have her as his own. Some of his conquests would be rape by today’s standards, but they were not even shocking in the day. Genji, feels a right to any woman he desires and scolds these women, girls really, as unkind if they rebuff him. He then pressures or forces them. Sometimes he marries them, sometimes he “keeps” them if they are not politically worthy, sometimes he discards them, albeit now in delicate condition.

So, pardon my intolerance if I say “yuck”. I couldn’t stand Genji and what made matters worse – he considered himself quite gracious and steadfast, a girl should consider herself lucky. He is portrayed as the admirable hero of this tale.

He addressed each of them most gently and courteously, and indeed he was fond of them all, after their several stations. They could not have complained whatever he chose to do with them, but he was moderation itself, allowing no suggestion of the haughty or arbitrary. His attentions were for them the chief comfort of life.

It’s also very long, no true plot, just a character driven narrative, and it’s unfinished. I probably wouldn’t have stuck with this book, if it were not for one bright shining person: Murasaki. She is a model of grace and charity. Her step-son had these thoughts of her…

Not many women, thought Yugiri, were perfect. Only Murasaki had over the years seemed beyond criticism. She had quietly lived her own life and no scandal had touched her. She had treated no one maliciously or arrogantly and had herself always been a model of graceful and courtly demeanor.

And the narrative offers this eulogy…

The successful and happy sometimes arouse envy, and sometimes they let pride and vanity have their way and bring unhappiness to others. It was not so with Murasaki, whom the meanest of her servants had loved and the smallest of whose acts had seemed admirable. There was something uniquely appealing about her, having to do, perhaps, with the fact that she always seemed to be thinking of others. The wind in the trees and the insect songs in the grasses brought tears this autumn to the eyes of many who had not known her, and her intimates wondered when they might find consolation. The women who had long been with her saw the life they must live without her as utter bleakness. Some of them, wishing to be as far as possible from the world, went off into remote mountain nunneries.

And one bit of redemption for Genji after Murasaki's death…

He would sometimes look in on the Akashi lady [#2 wife] when the loneliness was too much for him, but he never stayed the night.

I made a pun earlier when I described Murasaki as the bright “shining” character of this novel:  Genji is Hikaru Genji (shining Genji) and is described as having a visible evanescence. I say no; Murasaki is the bright spot.

As I said I’m glad to have read it, because it is historically and culturally important. It gives an inside look at a mysterious time and place. But I’d have put it down long ago if I were reading only for pleasure. Glad to have read it, even more glad to be done.

This novel satisfies square B1, Classic of Asia, in the 2020 Classic Bingo Challenge, and Classic by a Person of Color in the Back to the Classics Challenge 2020.

Murasaki was the perfect companion, a toy for him [Genji] to play with.
I should imagine that women with no merits are as rare as women with no faults. ~ To no Chujo (friend of Genji’s)