The Adventure of the Copper Beeches – a Sherlock Holmes short story

I haven’t read Holmes in quite a while, and was excited to get back to the intrepid detective. Holmes seldom disappoints, but in this instance, he did.

Violet Hunter is a governess, and paid well above the going rate as long as she satisfies the seemingly harmless, but eccentric, wishes of her employer: cut her hair very short, wear a certain dress, sit at times in a certain spot. She becomes aware of a mysterious secret in a closed off section of the house and enlists Holmes to solve the mystery.

He does of course, simply by investigating the house, when the master is away. There is very little of the amusing banter between Holmes and Watson, and little of Holmes legendary power of observation and deduction. 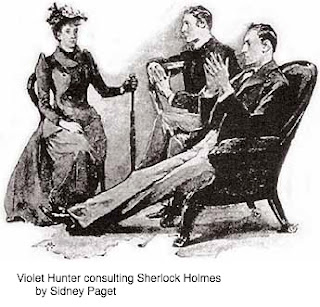 Nothing worth quoting; the illustrations by Sidney Paget fail to excite, and even
the title lacks creativity; it references copper colored beeches that adorn the lawn, but have no other significance.

I must have been an off-day for Sir Arthur.