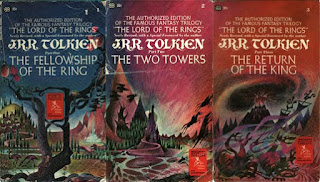 ...do not despise the lore that has come down from distant years; for oft it may chance that old wives keep in memory word of things that once were needful for the wise to know.
The Lord of the Rings is a third-person narrative, epic fantasy, set in Middle Earth, inhabited by elves, dwarfs, mortal men, wizards, dragons, other nasty beasts, and of course hobbits. The Hobbit is prequel to LOTR, is a bit less epic, a bit more whimsical, and tells the tale to set the stage for the great tale - the tale of The One Ring of Power.
My rating: 5 of 5 stars

Those of you who know me, know this will be a review of glowing praise. Apart from the Bible, there is nothing I have re-read more than The Lord of the Rings. It a trilogy, but one story and “The List” counts it as one. I first read LOTR when I was 10, thanks to my sixth-grade teacher Mrs. Banks. She will forever be my favorite teacher and LOTR will always be my favorite novel. I haven’t kept track, but I know this was at least my sixth reading and likely not the last. In my opinion, you simply cannot read LOTR without first reading The Hobbit, so I re-read that again as well and this review covers both.

Simply put, LOTR is the most enjoyable thing I’ve ever read. I don’t call it the greatest or best novel I’ve read, because I have read a few – a few – that I think are greater literary achievements. But again, nothing more enjoyable. I wish I could unread it, have my memory purged, and read it again anew.

So why do I love it so much? Well, I'd rather not get too analytical; it is pure escape and an epic contest between good and evil. The heroes, Bilbo, Aragorn, Gandalf, Sam, Frodo, et al have their flaws, but are still clearly heroes. There are lesser villains such as Smeagol and Saruman. You wish for their defeat, perhaps even destruction, but you also find them pitiable. One of my favorite characters, Boromir, is the most ambiguous. Is he a hero or villain? A hero in my opinion, though misguided and beguiled by the evil power of the ring. Denethor is somewhat the same. Boromir’s brother Faramir however, is magnificently noble and wise, if somewhat less mighty. THE Villain though, is as vile as can be.

LOTR is superbly written. There are passages of dialogue that made me laugh out loud, literally, and others that brought tears to my eyes, literally. There is narrative so terrifying that I slept, or more precisely lay awake with the light on, when I was 10 of course, not this most recent reading. The dialogue between Faramir and Eowyn when they are discovering their love for one another is beautiful beyond my ability to describe. There is also a delightful conversation between Gimli the dwarf and Eomer the mortal man and warrior of Rohan. When Gimli and Eomer first meet, it is tense and dangerous, neither sure if the other should be counted friend or foe. They eventually agree they fight the same enemy but there is still tension, including a disagreement about the Lady Galadriel, whether she is good or evil. Gimli challenges that if Eomer ever actually meets Galadriel, and does not profess her to be the most beautiful and virtuous creature in middle earth, the two will be obliged to fight in mortal combat. Eomer does indeed finally meet Galadriel, but he also meets the Lady Arwen, who he judges of equal goodness, but slightly greater beauty.

And before he went to his rest he (Eomer) sent for Gimli the Dwarf, and he said to him: "Gimli Gloin's son, have you your axe ready?"

"You shall judge" said Eomer, "For there are certain rash words concerning the Lady in the Golden Wood that lie still between us. And now I have seen her with my eyes."

"Alas," said Eomer, "I will not say that she is the fairest lady that lives."

"Then I must go for my axe", said Gimli.

"But first I will plead this excuse", said Eomer, "Had I seen her in other company, I would have said all that you could wish. But now I will put Queen Arwen Evenstar first, and I am ready to do battle on my own part with any who deny me. Shall I call for my sword?"

Then Gimli bowed low. "Nay, you are excused for my part, lord", he said, "You have chosen the Evening; but my love is given to the Morning."

Some have speculated that LOTR is an allegory, which seems to make sense. Tolkien was a good friend of C.S. Lewis who is best known for his classic allegory The Lion, the Witch, and the Wardrobe. There are elements in the LOTR that certainly seem allegorical. The Eagles for instance, that always show up near the end of epic battles to save the day. Surely the Englishman Tolkien intended the Eagles to represent America. However, the allegory theory falls apart on one very important point: Tolkien stated unequivocally that it was not an allegory. I have to believe the author.

I could go on and on, and show what a geek I am, but I’ll stop. I loved it. If you haven’t read it you should.

If more of us valued food and cheer and song above hoarded gold, it would be a merrier world. But sad or merry, I must leave it now. Farewell. ~ Thorin Oakenshield

Faithless is he that says farewell when the road darkens. ~ Gimili the Dwarf

What? In riddles? No! For I was talking aloud to myself. A habit of the old: they choose the wisest person present to speak to: the long explanations needed by the young are wearying. ~ Gandalph

Don't trust your head, Samwise, it is not the best part of you. ~ Sam

We who have lived long under the Shadow may surely listen to echoes from a land untroubled by it. ~ Denethor, Steward of Gondor

Gandalf! I thought you were dead! But then I thought I was dead myself. Is everything sad going to come untrue? ~ Sam

And all the host laughed and wept, and in the midst of their merriment and tears a clear voice of the minstrel rose like silver and gold, and all men were hushed. And he sang to them, now in the elven-tongue, now in the speech of the West, until their hearts, wounded with sweet words, overflowed, and their joy was like swords, and they passed in thought out to regions where pain and delight flow together and tears are the very wine of blessedness.

Cover Art: The 1965 paperback versions pictured above are the first American paperback editions, and the first I read - and yes, I still have them. These are scans of my covers. The artwork is by Barbara Remington and when the three books are put together it forms a mural, a schema for the story. I once had a very large poster depicting the mural, but sigh - that I no longer have.

Film Renditions: No comment on earlier film renderings. Peter Jackson’s masterpiece was, well…I’ve already shown my hand. I thought it was marvelous. I am glad a Tolkien fan directed the films. Jackson did a marvelous job. In my opinion he was true to the novel. I know there were a few omissions and a few departures. I think the omissions were excusable, and the departures understandable. The only departure that I have real issue with is the portrayal of Faramir. Faramir is one of the most truly noble, humble, good, kind, and valiant characters in the book. And though I feel strongly about the injustice done him in the film, a single major issue in over 11 hours (extended edition) is pretty good, so I’ll give Jackson a pass. The Hobbit films...not so much, though Martin Freeman was perfect as Bilbo.