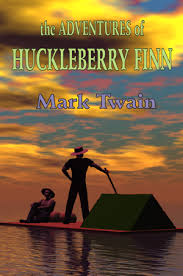 You don’t know about me, without you have read a book by the name of “The Adventures of Tom Sawyer.” but that ain’t no matter. ~ Huckleberry Finn

I’ve read The Adventures of Huckleberry Finn at least once before, maybe twice. It is a realist novel, satire, and the first-person narrative of Huck Finn regarding his adventures on the Mississippi River, early to middle 19th Century.

The Adventures of Huckleberry Finn is one of the first books I read for pleasure, not a school assignment. I had just read The Adventures of Tom Sawyer, but I think that was assigned. I enjoyed it so much, that I followed with Huck Finn. This is appropriate, since that is the correct chronological order, and the order in which they were written and published.

For the remainder of this review, I will refer to the novels as Tom Sawyer and Huckleberry Finn, and to the characters as Tom and Huck.

I enjoy Tom Sawyer more than Huckleberry Finn, probably because I identify with Tom more than Huck. I had a pretty care free childhood, lived on a lake, spent summers roaming, swimming, fishing, camping, etc. Unlike Huck, I had a safe and wholesome home life. So, as I say, I enjoy Tom Sawyer more, but Huck Finn is a wonderful tale as well, and generally considered Twain's greatest work.

However, that is hotly debated. The American Library Association ranked Huckleberry Finn number 5 on their list of the 100 most-challenged books between 1990 and 1999.

I believe most of the objection is over the extensive use of the “N-word” I believe a secondary, and related objection, is the portrayal of African-Americans as ignorant through the person of the runaway slave Jim.

I can’t defend either objection. Twain wrote about a time and culture that he knew very well…his own. There are portions of human history and American history that are abhorrent. I don’t believe we should rewrite the portions we find distasteful, nor should we ignore them. Twain wrote about the way things were. Some of those things were horrible. I think it’s helpful to keep a record.

Speaking of a record, for the record, Twain was an ardent abolitionist. He once wrote: "Our Civil War was a blot on our history, but not as great a blot as the buying and selling of Negro souls."

Jim was ignorant, with good excuse. How could he not be? But for all Jim’s ignorance, Huck was every bit as ignorant: ignorant of the evil of slavery. So ignorant that his conscience burdened him with his dreadful sin of helping a slave escape.

In fact, I believe this was Twain’s intent. To show the awful ignorance that was once so prevalent. When you read Huck Finn, you grow to love Huck. He is innocence. He has a heart of gold. Yet, this innocent pure heart believes he is committing a dreadful sin, worthy of Hell-fire in his own words, for helping a slave to escape.

But the reader knows, he is doing a truly heroic thing.

Besides the theme of racism and bigotry, the novel paints a quaint picture of life on the Mississippi. Most of the story is Huck and Jim’s journey down river. Why would they be going south? Well for one thing, that’s the way the river runs, but for the more pertinent reason, you’ll have to read for yourself. They encounter iconic southern families, a country feud, and a pair of scoundrels: the King and the Duke. Thankfully, the great adventurer Tom Sawyer enters the tale. Jim is captured, and Tom develops a plan to free Jim. Tom makes the plan unnecessarily complicated, for style points demanded by the books of adventure he’s read. He’s a bit like Don Quixote is Tom.

If I had time, I’d read Tom Sawyer now, but with the exception of Huck Finn, I am in a daunting section of my list, filled with 1000 page novels. I recently took more than a month each for Don Quixote and The Brothers Karamazov. Now I’ve got Anna Karenina, and Gone With the Wind.

You can’t pray a lie—I found that out. ~ Huck
All right then, I’ll go to hell—and tore it up. ~ Huck as he decides NOT to turn in the runaway slave Jim.
But I reckon I got to light out for the Territory ahead of the rest, because Aunt Sally she’s going to adopt me and sivilize me and I can’t stand it. I been there before. THE END, YOURS TRULY, HUCK FINN.

Film Rendition: There were many to choose from. I picked the 1960 version with Eddie Hodges as Huck. I'm certain this was not the best version available. It was not very true to the book, leaving Tom Sawyer out entirely. I don't recommend it.