Wuthering Heights by Emily Brontë (33 down 67 to go)

This is the first time I’ve read Wuthering Heights 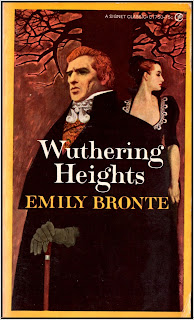 or Emily Brontë. The book is a third-person narrative, Victorian era, romance. Set in England at the start of the 19th century, it covers three generations of the Linton and Earnshaw families.

As I said, this was my first time reading Wuthering Heights, which is my favorite way to begin a book: no expectations and no idea of the plot. Well started, and then…Wow! What a miserable book. I don’t mean it is bad literature, I mean it is a miserable, miserable story.

You are not mistaken, this is not my review of Under the Volcano. The two are quite different, though at points both so miserably sad, I could not resist beginning this review exactly as I did the last.

Some call Wuthering Heights a love story. Me, not so much. In my humble opinion, Heathcliff, the main character and antagonist, does not know the meaning of love. There are some love stories within the story, but for me, the main story is one of revenge.

As I read Wuthering Heights, I kept thinking of that other great revenge story, The Count of Monte Cristo. The hero, Edmond Dantès, like Heathcliff, plots a brilliant revenge. But you might have noticed I called Edmond a hero, and Heathcliff the antagonist. Two reasons: First, the injustice suffered by Edmond is unbelievably cruel, whereas the insult to Heathcliff is very slight. Second, Edmond executes revenge on guilty parties, whereas Heathcliff punishes the innocent in order to strike his foes. (I’ll read and review The Count of Monte Cristo, much later in my quest, though I’ve read it before. It is brilliant, and offers an entirely different lesson on revenge.)

I suspect some will complain that Heathcliff’s insult was not so slight. I maintain it was. If you truly look back when he first swore revenge it was over something quite trivial, and he already retaliated disproportionate to the insult. After that, he nourished and relished hatred. I don't believe revenge is ever a noble pursuit, but Heathcliff has nothing like Edmond Dantès excuse.

I’m avoiding description of other characters in Wuthering Heights, because they are a bit difficult to keep track of even when reading the novel in entirety. I would surely confuse things trying to discuss them here. With the exceptions of Heathcliff, and lesser villain Joseph, they are mixtures of wise and foolish, innocent and conniving, likeable and detestable, loving, lovable, pitiable. I found none of them admirable.

But Heathcliff. I give Brontë high marks for being unpredictable. In the beginning, I was expecting the poor Dickensian orphan, unjustly denied a place in the world, who would rise by purity and courage to achieve a just, but not cruel recompense. Goodness was I wrong. Heathcliff is one of the most loathsome characters I’ve encountered in literature. He was evil.

Which made the ending difficult for me to accept. I saw insufficient catalyst to affect the change. Oh, I get what was supposed to be happening. It just wasn’t believable to me. I also found Cathy’s change of heart toward Hareton a bit inexplicable. It was essential, I just didn’t feel there was much impetus to explain it, though it was much more believable than the change in Heathcliff.

The reclamation of Hareton is the redemption of the story. It is a marvelous commentary. Hareton, was nearly despicable, but the reader, like Cathy easily forgets he was a product of circumstance. Circumstance, in the person of Heathcliff, had robbed him of fortune, education, dignity, and love. When these were restored, even imperfectly, there was hope, and by reclaiming Hareton, Cathy is herself redeemed.

Still, I did not like Wuthering Heights half so much as Jane Eyre by Emily’s sister Charlotte.

I forgive what you have done to me. I love my murderer…but yours! How can I?

I used to draw a comparison between him and Hindley Earnshaw, and perplex myself to explain satisfactorily why their conduct was so opposite in similar circumstances. They had both been fond husbands, and were both attached to their children; and I could not see how they shouldn’t both have taken the same road, for good or evil. But, I thought in my mind, Hindley, with apparently the stronger head, has shown himself sadly the worse and weaker man. When his ship struck, the captain abandoned his post; and the crew, instead of trying to save her, rushed into riot and confusion, leaving no hope for their luckless vessel. Linton on the contrary, displayed the true courage of a loyal and faithful soul; he trusted God; and God comforted him. One hoped, and the other despaired.

Film Rendition: I finally got around to watching a film rendition, nearly two months after reading, and it only reminded me, what an awful story this is. I watched the 1939 rendition with Laurence Oliver as Heathcliff. It was only half true to the book, and I didn't enjoy it, even though it had one of my favorite actors, David Niven as Edgar. I often say skip the movie, read the book. I'm inclined to say skip both in this case.
.
Posted by Joseph at 11:40 AM