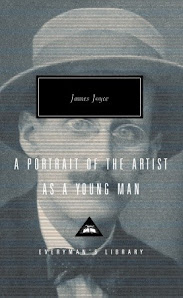 You are an artist, are you not, Mr. Dedalus?...The object of the artist is the creation of the beautiful. What the beautiful is is another question.

This was the first time I’ve read A Portrait of the Artist as a Young Man, and the second novel I've read by Joyce. This novel is in the modernist style, using free indirect speech, and set in late 19th, early 20th century Ireland. The story is exactly what the title asserts, the tale of an artist’s life and development or Künstlerroman.

I’ve been dreading this book, as I disliked my previous experience with Joyce, but my dread was for naught. I enjoyed A Portrait of the Artist. It isn’t a favorite, but it has some beautiful prose, and was much easier to read than Ulysses. If you’ve ever thought of tackling Ulysses, I’d recommend reading A Portrait of the Artist first.

The artist, is Stephen Dedalus whose destiny was to be elusive of social or religious orders. Dedalus is the alter ego of the author, who tells the tale in only five chapters. Chapter one begins with possibly Stephen’s earliest conscious thoughts, of rhymes probably told by his mother. It takes him through school days at a Jesuit school, where he is not very popular until he is wrongfully punished by one of the priests. He becomes a hero, when he complains to the rector and receives vindication.

In chapter two, Stephen is older (thank you Captain Obvious). Joyce seldom sets the precise date or Stephens’s age, so the reader is left to infer. Financial difficulties force a move to new home and school. By the end of the chapter, probably in his late teens, Stephen roams the streets of Dublin and encounters a prostitute resulting in his first sexual experience.

In chapter three Stephen revels for a bit in a hedonistic lifestyle, only occasionally burdened by his sin. But during a retreat at his school one of the priests gives a terrifying portrayal of hell, and Stephen in fear for his immortal soul, repents, and amends his ways.

In chapter four the reader sees his piety is sincere and he is for the most part at peace, though he still has doubts from time to time. He is recognized for his devotion, and one of the priests invites him to consider the priesthood. Stephen is at first thrilled and honored, but becomes less and less enamored with the austere lifestyle; he has an epiphany, and decides he is not meant to join the Holy Order. This too brings a sense of peace, and is one of Stephen’s first independent decisions:

...independent of familial, national, and religious ties that have influenced him thus far.

The end he had been born to serve yet did not see had led him to escape by an unseen path and now it beckoned to him once more and a new adventure was about to be opened to him.

Chapter five was my favorite chapter. It begins with Stephen at home, the family still in financial straits, and concludes with Stephen at university. He is intellectually superior to at least one of his professors, and certainly to most of his fellow students. They love to engage in rhetoric and debate, self-satisfied with their own wit and wisdom. Much of the discourse is vain and pretentious, for example one states:

And as you remark, if it is thus, I ask emphatically whence comes this thusness?

Most importantly, Stephen and one of his friends Cranly, break away and have a long discussion about Stephen’s revolt against religion. Cranly is a good friend. He doesn’t necessarily try to persuade Stephen one way or another, but asks him questions that force Stephen to understand himself and his own values.

Cranly tells Stephen that many religious people overcome doubts of faith. He then asks Stephen,

Are your doubts on that point too strong?

I do not wish to overcome them.

The final pages are Stephen’s diary entries. Stephen has decided to escape Ireland, for the continent, and pursue his passion as a poet and writer. The second to final entry:

Welcome, O life, I go to encounter for the millionth time the reality of experience and to forge in the smithy of my soul the uncreated conscience of my race.

Old father, old artificer, stand me now and ever in good stead.

This is probably an allusion to Daedalus from Greek mythology, the father of Icarus, and master craftsman (artificer), who fashioned wings for himself and Icarus to escape imprisonment. Joyce loves allusions to Greek mythology. The entirety of Ulysses after all parallels Homer’s epic poem, Odyssey. Ulysses is the Latinized version of the name of Odysseus.

I wish I had read A Portrait of the Artist before Ulysses. I think I would have appreciated Ulysses more, and I certainly would have understood Joyce better.

A Portrait of the Artist as a Young Man is not strictly autobiographical, or even semi-autobiographical, but the main character, Stephen Dedalus is generally accepted to be Joyce’s fictional alter ego. I also think it is not truly a prequel to Ulysses. Stephen does appear in both novels, but he is not the central figure of Ulysses, whereas he is the only primary character in A Portrait of the Artist.

Christmas vacation was very far away: but one time it would come because the earth moved round always. ~ school boy Stephen

When you kick out for yourself, Stephen…as I daresay you will one of these days…remember, whatever you do, to mix with gentlemen. When I was a young fellow I tell you I enjoyed myself. I mixed with fine decent fellows. Everyone of us could do something. One fellow had a good voice, another fellow was a good actor, another could sing a good comic song, another was a good oarsman or a good racket player, another could tell a good story and so on. We kept the ball rolling anyhow and enjoyed ourselves and saw a bit of life and we were none the worse of it either. But we were all gentlemen, Stephen…at least I hope we were…and bloody good honest Irishmen too. ~ advice from Stephen’s father

Disheartened, he raised his eyes towards the slow-drifting clouds, dappled and seaborne. They were voyaging across the deserts of the sky, a host of nomads on the march, voyaging high over Ireland, westward bound. The Europe they had come from lay out there beyond the Irish Sea, Europe of strange tongues and valleyed and woodbegirt and citadelled and of entrenched and marshalled races. He heard a confused music within him as of memories and names which he was almost conscious of but could not capture even for an instant; then the music seemed to recede, to recede, to recede, and from each receding trail of nebulous music there fell always one longdrawn calling note, piercing like a star the dusk of silence, Again! Again! Again! A voice from beyond the world was calling. ~ Stephen’s thoughts

She was alone and still, gazing out to sea; and when she felt his presence and the worship of his eyes her eyes turned to him in quiet sufferance of his gaze, without shame or wantonness. Long, long she suffered his gaze and then quietly withdrew her eyes from his and bent them towards the stream, gently stirring the water with her foot hither and thither. The first faint noise of gently moving water broke the silence, low and faint and whispering, faint as the bells of sleep; hither and thither, hither and thither; and a faint flame trembled on her cheek. ~ Stephen’s thoughts of a young girl he was watching by the seashore

Look at him!...Look at Ireland’s hope! ~ A university friend, referring to Stephen

I tried to love God…It seems now I failed. It is very difficult. I tried to unite my will with the will of God instant by instant. In that I did not always fail. I could perhaps do that still. ~ Stephen

Whatever else is unsure in this stinking dunghill of a world a mother’s love is not. ~ Cranly

References to other Great Novels:

Stephen and school mates debate whether Victor Hugo is the greatest French writer.