Because a Little Bug went Ka-CHOO! by Rosetta Stone, illustrated by Michael Frith. Guest book review by my Grandson, Andrew

I was reading with my Grandson Andrew, and he decided to contribute a book
review to my blog. 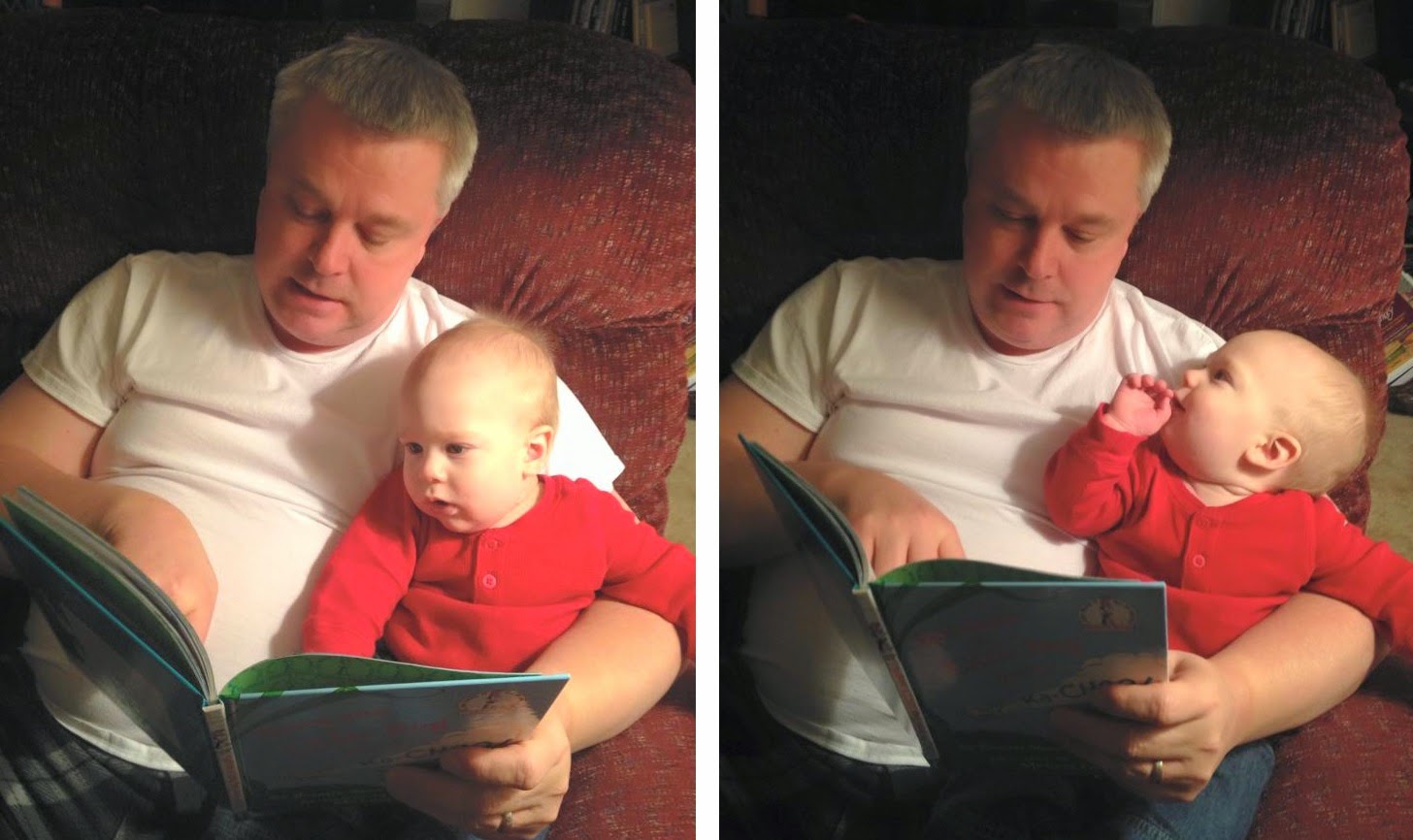 To the best of my ability, I have transcribed Andrew's thoughts on the subject. He does not use actual words just yet, but I am confident I have inferred his views accurately.

Because a Little Bug went Ka-CHOO! is the story of...you guessed it, a bug who sneezed and the resultant mayhem.

Some have argued the story is a discourse  regarding the cogency of fatalism vs determinism, but Andrew is dubious of this explanation.  He sees it rather as an apology for the interconnectedness of life. He felt, that as far as the story goes, the events make a compelling argument, without making an unnecessary leap to the mystical concept of universal oneness. 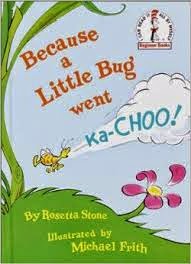 A sample of the chronology goes like this: A bug sneezes causing a seed to drop and hit a worm on the head. The worm gets mad and kicks a tree causing a coconut to drop on a turtle's head. The turtle falls in water, splashing a hen. The hen gets mad and kicks a bucket. The bucket flies up in the air and comes down Farmer Brown's head, where it remains stuck for the remainder of the story.

The rationale for the fatalist preference is obvious at this point: angry creatures kicking objects, objects falling on other creature's heads, seemingly for perpetuity. However, Andrew sees this as something of a White Rabbit, with the greater theme being the unstoppable chain of events that transcends the whole objects falling on someone's head motif.

Andrew felt that Farmer Brown is the central character and an archetype of Donne's "No Man is an Island". He is both affected by, and affecting on those around him.

Send not for whom the bucket falls...it falls for thee.

We never see Farmer Brown's face; he's got a bucket on it after all. While some believe the bucket is a metaphor, for the public face we wear to conceal our true selves, Andrew felt it was simply a deliberate device of the author, to allow the reader to empathize unprejudiced by emotions the reader might otherwise perceive in Farmer Brown's expression.

Besides the bug, worm, turtle, hen, and Farmer Brown, other characters include: policemen, leisurely yachters, circus performers, and Andrew's favorite...Mrs. Brown (because she reminded him of Gramms).

Although most of the characters were quite believable, Andrew found the yachters a bit esoteric and the hen a bit stilted. His only serious complaint though, was the worm. Andrew has no objection to suspending disbelief, but he was incredulous at the aspect of a worm kicking a tree.

This aberration aside, Andrew found the worm to be a true villain. The worm's myopic worldview and total disregard for the tragic consequences of his actions, unleashed a chain of events, which according to the author may still be....going on yet.

Andrew thought the third person narrative was marvelous, the prose was hauntingly beautiful at times: Everyone, everyone started to yelp. And Mrs. Brown called on the phone for more help; and ingeniously comic at others: Because he got bopped, that turtle named Jake fell on his back with a splash in the lake. With the exception of the clowns, Andrew thought the illustrations were delightful. He thought the clowns were kind of creepy, and the kind of thing he will one day fear is hiding under his bed.  Overall, Andrew enjoyed Because a Little Bug went Ka-CHOO!, though he feels...it is no Cat in the Hat.