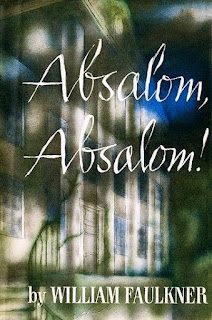 This is the first time I’ve read Absalom, Absalom!, and the third novel I’ve read by William Faulkner. It is a southern-Gothic, modernist novel, told by numerous narrators, several of them unreliable. It is the history of the Sutpen family, taking place in Mississippi before, during, and after the American Civil War.

This novel satisfies square B1 of 2015 Classics Bingo: written by a Nobel Laureate.

The title is derived from the Bible passage quoted at the beginning of this review. The passage describes King David’s reaction to the death of his son Absalom, who rebelled against his father and tried to usurp the throne.

It is a heart wrenching passage of scripture and Absalom, Absalom! is similarly tragic. The central character is Thomas Sutpen who has a single-minded ambition to raise himself and his heirs to prominence and respectability.

Like most Faulkner’s novels this story takes place in and around Jefferson Mississippi. Quentin Compson, a significant character from The Sound and the Fury, is the chief story teller in Absalom, Absalom!, though there is no other connection between the two stories.

Thomas Sutpen was born in 1807 to a poor family in West Virginia. They move to coastal Virginia when he is 10 or 12, he does not know his precise age. Thomas is sent on an errand to a Virginia manor, and is treated with contempt by a slave, and told to never come to the front door. This insult serves as the motivating force the rest of Thomas’ life. He determines to raise himself, and his progeny, to the level of a southern gentleman, and never be mistreated again. He runs away to the West Indies, where he believes that a young man of courage and wit could make a fortune.

Thomas once described his plan to a friend:

I had a design. To accomplish it I should require money, a house, a plantation, slaves, a family, incidentally of course, a wife. I set out to acquire these, asking no favor of any man.

In the West Indies, he begins his fortune and then moves to Haiti, where he marries, has a son, and all is going as planned...and then the plan begins to unravel. He learns his wife is one-eighth Negro or octaroon (that was a new term on me). That would not do, so Thomas divorces his wife, but leaves her and the child well provided for. He then moves to Mississippi to start again, believing he has left the past well behind him.

He cheats some Native Americans out of 100 acres of land, now known as Sutpen’s Hundred, builds an ostentatious mansion, finds a respectable southern wife, has a son Henry, daughter Judith, and again feels things are going perfectly.

And then the past rears its head. Henry befriends Charles Bon at college. He brings Charles home, and Judith and Charles become engaged (bit more complicated than that…but I’ll leave it at that). None of them know at this point that Charles is actually Henry and Judith’s half-brother from Thomas’ earlier marriage.

And you can see how that might just set awry the best laid plans of mice and Thomas.

It is an intricate web of intrigue, ambition, deceit, murder, and despair. I think it would have been a great story except for one thing…the infernal stream of consciousness that Faulkner loves. It’s a pet-peeve of mine I know, but I believe this story would have been much better narrated in third-person.

It’s an opinion; it’s mine and it’s my blog…so I’m entitled. The stream of consciousness, and the biased, unreliable narrators make it very challenging to know precisely what is happening. To get the clearest idea of the story, I think I would have to re-read Absalom, Absolom! now that I’ve read the differing points of view. I’m certain it would make better sense the second time through…but yeah…moving on.

That’s essentially my complaint with stream of consciousness. You have to work very hard, go back, re-read, re-reference, or use commentary to understand what’s happened. I read for the STORY…not for the challenge of figuring out what the story is.

That’s why it annoys me so. I think this was a magnificent story that suffered in the telling. I know…Faulkner…American literary legend…who am I? Just a reader.

Seeking out the nature of man.

I think that’s an astute appraisal.

And Faulkner is a great writer. I’m not denying that in the least. Below are a couple quotations that I won’t attempt to put in context. They demonstrate his turn-of-phrase.

Trivia: According to the 1983 Guinness Book of World Records, Absalom, Absalom! contains the longest sentence in literature...nearly 1,300 words.

…the father who is the natural enemy of any son and son-in-law of whom the mother is the ally, just as after the wedding the father will be the ally of the actual son-in-law who has for mortal foe the mother of the wife.
Quentin hearing without having to listen as he read the faint spidery script not like something impressed upon the paper by a once-living hand but like a shadow cast upon it which had resolved on the paper the instant before he looked at it and which might fade, vanish, at any instant while he still did...