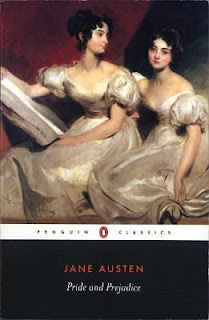 "It is a truth universally acknowledged, that a single man in possession of a good fortune must be in want of a wife." ~ Opening line

This is the first time I’ve read Pride and Prejudice and the second work I’ve read by Jane Austen. Pride and Prejudice is a third-person narrative, Romantic era novel. It tells the story of the Bennet family, early 19th century England, and particularly of the two eldest daughters, Jane and Elizabeth.

This novel satisfies category one: A 19th Century Classic, from the Back to the Classics Challenge 2016.

In short, I loved it.

Mr. Bennet, is an English gentleman whose estate is irrevocably entailed to his nearest surviving male relative. As Mr. Bennet has only daughters, five in all, the estate is to be settled on his nephew, Mr. Collins. But as I said, the story is mostly about Jane and Elizabeth (Lizzy). More precisely, Lizzy is the main character, while Jane, her dearest friend and confidante is only slightly less significant. Lizzy is the favorite of her father, and the least favorite of her mother. Both are fond of Jane. Mr. Bennet believes his three youngest, Catherine (Kitty), Mary and Lydia are simple and silly, much like his wife.

I liked Pride and Prejudice, perhaps a bit more than Emma. Having read two Austen novels, I am now an expert. They go something like this.

Among a crowd of laughable and likeable characters, emerge two people perfectly suited for each other, but maddeningly blind to it themselves. Fate or circumstance, gradually bring the two slowly together, but when they finally overcome their own prejudices, they are prevented from obstacles of rank, duty, convention, or familial responsibility.

Don’t mistake my glib description as criticism. It is not. It is a time-honored motif, employed in many eras, by many great writers, producing many superb tales. It works well, but it requires a writer of some craft. In this instance, Austen approached genius.

None of the Bennet girls have much hope in society other than to marry well. This is not at all hopeless as Jane and Elizabeth at least, are considered great beauties. When Mr. Collins comes to call, already heir to the estate, he clearly intends to improve his position by winning the hand of one of his cousins. He first sets his sights on Jane, but learns that she has an admirer and quickly transfers his interest to Lizzy. If ever there was a terrible match, it would be Mr. Collins and Lizzy. He is pompous and officious, whereas Lizzy is intelligent, witty, discerning and sincere. Mr. Collins cannot conceive that any woman would refuse him, and Lizzy cannot imagine any would have him.

Bit more on Mr. Collins: he never reads novels. Who could like such a man?

Enter Mr. Darcy: extremely wealthy, tall and handsome, aloof and proud. And the time-honored motif is set, but as I’ve implied, Austen does an extraordinary job of confounding what the reader so desperately believes must happen.

His [Mr. Darcy] understanding and temper, though unlike her own [Lizzy], would have answered all her wishes. It was an union that must have been to the advantage of both; by her ease and liveliness his mind might have been softened, his manners improved, and from his judgment, information, and knowledge of the world, she must have received benefit of greater importance.

Film Rendition: I’ve only seen the 1995 A&E mini-series, starring Jennifer Ehle and Colin Firth. I thought it was an excellent portrayal and superbly cast. In the novel, Lizzy is often described as having fine or beautiful eyes and I’m not certain there’s an actress in Hollywood with such beautiful eyes as Jennifer Ehle.