An American Tragedy by Theodore Dreiser (72 down, 28 to go) 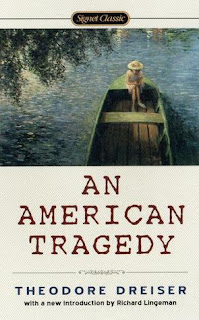 Under the merciful direction of a living God, was it not evil in a mother to believe evil of a child, however dread his erring ways might seem? ~ Clyde Griffith’s mother

This is the first time I’ve read An American Tragedy or Dreiser. The book is a naturalist novel, set in early 20th century America, probably 1920s. It is the third-person narrative about Clyde Griffiths who is born to a life of no privilege or prospect, yet who aspires to something more, the American dream no less. You might infer from the title – not all his dreams come true.

Clyde is the eldest child of poor street missionaries living in Kansas City when the novel opens. As a teen, Clyde senses the disadvantages his parents’ calling places him in. He quietly resents their backwardness and yearns for something more, but he has no plan and knows of no way out of the life he’s is trapped within. In the beginning, I thought Dreiser was a bit contemptuous of Christianity, as he portrayed Clyde’s parents, but later chapters convince me otherwise. Clyde’s father is clearly rather simple and weak, but even in the early chapters, Dreiser gives greater respect to Clyde’s mother.

In spite of his disadvantages, Clyde manages to catch a break or two and seems to be slowly rising above his previous position. He gets a job as a bellboy in a posh Kansas City hotel, which with tips, actually pays pretty well for a young man of his age and abilities. It also introduces him to a sensual lifestyle that he indulges in, though not without with pangs of guilt and even disgust.

Then tragedy strikes, and even though he is not directly at fault, Clyde flees Kansas City in fear of the law. He ends up in Chicago where he again seems to be clawing his way up in society – when a fortuitous meeting with a rich uncle, gives Clyde his first truly bright hope. The reader hopes too, because the reader is by this time cheering for Clyde, who is a good kid at heart, clearly beaten down by circumstance. The reader hopes, but there is that ominous title on the cover.

Clyde’s uncle, a clothing manufacturer in Upstate New York, invites Clyde to come east and he will try to find him a position in his factory. Clyde makes his way to New York, and is indeed given a job. With no qualifications, he is given a menial job, but once again things seem to be improving for Clyde. But he is quite alone. His look-alike cousin, who runs the factory is dubious of Clyde’s ambition and seems intent on not letting Clyde go far. Clyde’s uncle however, clearly no fool and with more compassion than his son, intervenes to allow opportunity for Clyde’s advancement.

Clyde is still quite alone. He is invited to his uncle’s house, but it only highlights the difference between his place in society and theirs. Meanwhile, the workers consider him a Griffiths, nephew of the owner, and not of their social standing. And then, there is a company rule that prohibits Clyde from fraternizing with the young female employees that he now supervises.

In spite of the rule, Clyde is infatuated with one particular girl, Roberta Alden, who like Clyde, comes from a poor Christian family. Roberta clearly likes Clyde as well, and the two embark on a series of clandestine liaisons, usually at outdoor venues in nearby towns, to avoid being seen together. However, as winter approaches Clyde pressures Roberta to allow him to visit her in her apartment, something she has never allowed. Roberta resists, but for fear of losing him eventually acquiesces – and then of course – you know the rest – she surrenders even more to him – and then she has a problem she will not be able to hide for long.

At the same time, Clyde is finally gaining entrance into circles of the best of society. His uncle’s family is still aloof, but other rich families, peers of the Griffiths, perceive that Clyde is after all a Griffiths, and likely destined to a greater role in the company. He is accepted into the best of society and even manages to win the affection of Sondra Finchley, one of the wealthiest, and prettiest young women. He all but forgets Roberta – but she will not let him forget.

And that is Clyde’s dilemma. He finally sees his dreams as possibly coming true, but Roberta can ruin it all.

Now you are probably already thinking what a scoundrel, and you’re right, in fact you don’t know the half. I can’t possibly make you feel in a few paragraphs, what Dreiser made me feel in hundreds of pages. So, you’ll just have to trust me. But I say this to prepare you – I’m going to make assertions that just won’t seem believable – not about what happens in the novel, but about how Dreiser made me feel about what happens in the novel.

Clyde is trapped. If he does the right thing by Roberta, it will destroy all his aspirations. He cannot do nothing though, for once Roberta is exposed, she will expose Clyde, and destroy his aspirations regardless.

So, he contemplates murder.

But not now, right? He’s a monster, right?

Dreiser eases the reader into this so gradually, so subtly, so disturbingly – that I didn’t think Clyde was a monster. I still liked him. I was still cheering for him. Not cheering that he could pull off murder, but wishing there was some way out for him, some way he could keep his dreams alive.

The way Dreiser describes Clyde’s descent into contemplating so heinous a crime is brilliant. A newspaper article about a boating accident spawns the idea in Clyde’s mind, but he is immediately repulsed. Later, it crosses his mind again and again he is repulsed but he lingers just a bit longer on the thought. And seductively the demons whisper lies and despair. Clyde is convinced it is his only option. It can be done. It makes sense. It might even be justified.

Not buying it, are you? As I said, I can’t bring you along as Dreiser does. But how often have we heard of a brutal murder? The friends and family of the murderer are in disbelief – they never imagined he was capable of such a thing. We usually only read about the ghastly crime scene – and we know the murderer is a monster. Dreiser does a masterful job of portraying the slow, subtle corruption of the good kid, the kid I was cheering for.

There but for the grace of God, go I.

I’m not entirely comfortable with that thought, but I doubt Dreiser was trying to make me comfortable.

Clyde plots Roberta’s murder and puts his plan in action, and Roberta does indeed end up dead. But is Clyde guilty? Under a very fine point of law, perhaps not. At the last second, he finds he cannot go through with it, but in the intensity and confusion, there is an accident – truly an accident – and Roberta is drowned.

In the ensuing investigation, all of Clyde’s plotting comes to light and there is no hope of convincing the jury it was an accident.

Clyde is convicted and sentenced to be executed.

And then, Dreiser stunned me. While awaiting execution, Clyde is visited by Reverend McMillan, sent by Clyde’s mother. The Reverend is unconvinced of Clyde’s innocence, and confronts Clyde with the greater question: is he guilty before the Supreme Judge, who needs no evidence or argument to discern the truth?

And Clyde is born again.

Shortly before his execution, Clyde writes the following letter and gives it to Rev McMillan to make public:

In the shadow of the Valley of Death it is my desire to do everything that would remove any doubt as to my having found Jesus Christ, the personal Savior and unfailing friend. My one regret at this time is that I have not given Him the preeminence in my life while I had the opportunity to work for Him.If I could only say some one thing that would draw young men to Him I would deem it the greatest privilege ever granted me. But all I can now say is, “I know in whom I have believed, and am persuaded that He is able to keep that which I have committed unto Him against that day”If the young men of this country could only know the joy and pleasure of a Christian life, I know they would do all in their power to become earnest, active Christians, and would strive to live as Christ would have them live.There is not one thing I have left undone which will bar me from facing my God, knowing that my sins are forgiven, for I have been free and frank in my talks with my spiritual adviser, and God knows where I stand.My task is done, the victory won. CLYDE GRIFFITHS

And Clyde, who all his life has been self-obsessed and discontented, kisses his mother and goes serenely to his death.

Write your mother, Clyde, and bear in mind that her love is always with you – guiding you – pleading with you to do right in the name of the Lord. ~ letter from Clyde’s mother
What was it about his life that made things happen to him? Was this what his life was to be like? Running away from one situation and another just to start all over somewhere else – perhaps only to be compelled to flee from something worse. ~ Clyde Griffiths
No! She could not doubt him – even now. Under the merciful direction of a living God, was it not evil in a mother to believe evil of a child, however dread his erring ways might seem? ~ Clyde’s mother

Film Rendition: The title is changed for the 1951 film, A Place in the Sun, starring Montgomery Clift, Elizabeth Taylor, and Shelley Winters. This is a very good rendition. I thought it was well cast and well acted. The ending was a bit less powerful, but otherwise a faithful adaptation.
.
Posted by Joseph at 3:18 PM