Great Expectations by Charles Dickens (74 down, 26 to go) 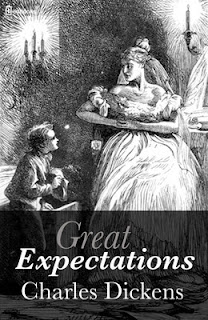 Heaven knows we need never be ashamed of our tears, for they are rain upon the blinding dust of earth, overlying our hard hearts. ~ Pip

This is the second time I’ve read Great Expectations, the first being nearly 30 years ago. I’ve also read several other works by Dickens.

Great Expectations is a Victorian era novel and bildungsroman. It is the first-person narrative of Philip Pirrip commonly known as Pip. Pip is an orphan in mid-nineteenth century England. From humble beginnings, Pip comes into the promise of great expectations by an anonymous and mysterious benefactor.

I am a fan of Dickens, but this was one of my least favorite of his novels. However, my opinion improved quite a bit with this second reading. I am incredulous that it should be ranked ahead of A Tale of Two Cities, Dickens' greatest work in my opinion, but still, I found Great Expectations quite captivating.

This novel satisfies item #11, a Classic you read in school, of the 2016 Back to the Classics Challenge.

Pip is not your typical Dicken’s orphan. He is neither wretched nor forlorn, in fact, he is reasonably comfortable, living with his sister Georgianna and her husband Joe Gargery. Pip’s sister views him as a burden and herself a martyr. She is not tender or loving, but neither is she terribly harsh. Pip and Joe however, love each other tenderly and each, with the support of the other, abide tolerably well under the domineering Mrs. Joe. Joe is the village blacksmith, and Pip is destined to be apprenticed to him one day…until his fortune changes.

Before his fortune changes however, there are two significant events in Pip’s life. First, while wandering some marshes by his house, he chances upon an escaped convict, who compels Pip to help him, by stealing food and a file from home and bringing it to him. Pip complies, but manages to flee while the convict is filing at his shackles. A bit later, authorities arrive searching for two convicts. Pip and Joe witness the authorities capture the two convicts, and though the one recognizes Pip, he does not reveal that Pip assisted him.

The event seems to be behind and forgotten, but if you know anything of Dickens – you know it likely has some import to be revealed later.

Sometime later, Pip is asked to visit an elderly woman of the village. The exact purpose of his visit is unclear, but it seems she wants a youthful presence or diversion in her unhappy home. Miss Havisham is wealthy and reclusive. Upon visiting, Pip discovers she is also eccentric and bitter over a jilted marriage. She spends all day, every day, in her wedding dress, never allows a ray of sunlight into the house, and has left everything in the house the way it was decades earlier on the day that was to have been her wedding day.

She also has an adopted daughter Estella, who is pretty, about Pip’s age, and completely aloof to Pip or anyone else. Notwithstanding – well you already know – Pip is infatuated, hopelessly and miserably infatuated. Miss Havisham makes Pip a regular visitor and revels in watching Estella wound Pip. In fact, she encourages him.

She said the word often enough, and there could be no doubt that she meant to say it; but if the often repeated word had been hate instead of love – despair – revenge – dire death – it could not have sounded from her lips more like a curse.

But then, as I’ve mentioned, Pip’s fortunes change. He is contacted by a lawyer, Mr. Jangles, representing an anonymous client who confers upon Pip “great expectations”. The benefactor intends for Pip to be a gentleman, so besides fine clothes, Pip is wanting an education. Arrangements are made for him to move to London for such refinement.

Pip is on his way up in the world, and the reader would feel very happy for him, but Pip is forgetful and even embarrassed by his former life, and even of dear Joe. The reader is embarrassed for Pip and his unfaithfulness, and indeed Pip, who is narrating his story reminiscent, also admits more than embarrassment, but sincere shame for his conduct.

You might also guess, that as Pip becomes a gentleman, Estella becomes a lady and a peerless beauty pursued by Pip and every other single gentleman who meets her.

And there I will leave it. There are more changes of fortune, some dear friends, bitter enemies, intrigues, adventures, ironies, and surprise twists.

The ending quite surprised me. I remembered it ending entirely differently. It was much more satisfying this time. I learned it is an alternate ending. The original ends dismally, this version the later alternate, ends hopefully.

Film Rendition: 2012 version starring Jeremy Irvine as Pip and Holliday Grainger as Estella is faithful to the book, well cast, well portrayed. I’m usually not a fan of film adaptations of Dickens, but this was quite good. Ralph Fiennes was perfect as Magwitch.
.
Posted by Joseph at 7:58 PM