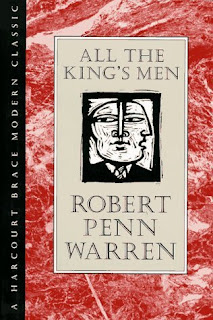 …what we students of history always learn is that the human being is a very complicated contraption and that they are not good or bad but are good and bad and the good comes out of bad and the bad out of good, and the devil take the hindmost. ~ Jack Burden

This is the first time I’ve read All the King’s Men or Robert Penn Warren. The book is a modernist novel with existential themes. It is the tale of Jack Burden and Willie Stark, because as Jack, the first-person narrator put it

Before reading All the King’s Men, I didn’t know it won a Pulitzer or that the 1949 movie adaptation won the Academy Award for best picture. I’m glad I didn’t know, as that would have set expectations high. I much prefer to have no expectations.

Jack Burden is a history researcher and aide to Governor Willie Stark – the popular and powerful governor of an unnamed Southern State in the 1930s (unnamed but most likely Louisiana). Jack is a crafty cynic, and worldly wise Jack-of-all-Trades for the governor.

In a flashback, the two meet when Willie is a petty county bureaucrat. Willie attempts to expose a crooked construction deal for a new school, but the old political machine is untouchable, until an inferior fire escape at the school gives way during a fire drill and kills several students and cripples others.

It was a piece of luck for Willie.

It launches Willie’s political career, and he runs for governor, or again as Jack put it…

In his initial campaign, Willie is naïve and politically inept. He is also initially a man of honesty and integrity, until he learns he is a stooge of the political machine, trying to split the support of another candidate.

Willie does not win that primary, but he does eventually become governor. He is wildly popular with the people, despised by political opponents, and feared by his stooges. His staff all call him Boss. Jack calls him boss, but is no stooge. Jack’s job included many things, such as digging up dirt on people that needed persuading.

Jack had other, less sordid, duties. He said:

I was supposed to do a lot of different things, and one of them was to lift up fifteen-year-old, hundred-and-thirty-five-pound hairy white dogs on summer afternoons and paint an expression of unutterable bliss upon their faithful features as they gaze deep, deep into the Boss’s eyes.[photo-op at the old family farm]

The tale is about Willie’s growing political savviness – and slow corruption, and simultaneously about Jack’s philosophizing of the entire saga. I couldn’t and wouldn’t attempt to recapitulate Jack’s philosophy. The quotation at the top of this post is one example, and here are a couple more:

If the human race didn’t remember anything it would be perfectly happy. I was a student of history once in a university and if I learned anything from studying history that was what I learned. Or to be more exact, that was what I thought I had learned.

As Jack implies, there are definite parallels between his story and Willie’s. Both are pragmatic and have no qualms with the seedier aspects of politics. Jack is able to justify his role because as a historical researcher – he loved truth. If it was the truth he dug up – so be it. The Boss did the dirty work with it. And even the Boss’ dirty work – well, they told themselves they were doing it for the greater good.

Several distinct but related violent events shake both Willie and Jack to the core of their beliefs. It comes too late for one, and perhaps just in time for the other.

I really enjoyed this novel. First, for the philosophical dilemmas, or moral ambiguity, or conflicted consciences, or situational ethics, or well you see – the complex business of life.

But secondly, Robert Penn Warren uses fabulous dialogue and narrative that is simply a lot of fun and entirely believable for his characters (examples in the excerpts at the end). Jack in particular likes to string together a half-dozen or more adverbs or adjectives in describing people and events.

There are several great tragedies in this novel – more than several, but in spite of them, there is a very satisfying ending.

Once more, in Jack’s words:

This has been the story of Willie Stark, but it is my story too. For I have a story. It is the story of a man who lived in the world and to him the world looked one way for a long time and then it looked another and very different way.

Have you read All the King’s Men? What did you think?

There’s a reference to Moby Dick as Jack describes the alluring look a love interest gives him. [she]

…sunk her harpoon deeper than ever Queequeg sunk it…

Then the boss spied a fellow, a tall gaunt-shanked, malarial, leather-faced side of jerked venison, wearing jean pants and a brace of mustaches hanging off the kind of face you see in photographs of General Forrest’s cavalrymen…
My god, you talk like Byram was human! He’s a thing! You don’t prosecute an adding machine if a spring goes bust and makes a mistake. You fix it. Well, I fixed Byram. I fixed him so his unborn great-grandchildren will wet their pants on this anniversary and not know why. Boy, it will be the shock in the genes. Hell, Byram is just something you use, and he’ll sure be useful from now on. ~ The Governor discussing how to deal with a corrupt bureaucrat
He learned that the world is like an enormous spider web and if you touch it, however lightly, at any point, the vibration ripples to the remotest perimeter and the drowsy spider feels the tingle and is drowsy no more but springs out to fling the gossamer coils about you who have touched the web and then inject the black, numbing poison under your hide.
That is what all of us historical researchers believe. And we love truth.
For West is where we all plan to go some day. It is where you go when the land gives out and the old-filed pines encroach. It is where you go when you get the letter saying: Flee, all is discovered. It is where you go when you look down at the blade in your hand and the blood on it. It is where you go when you are told that you are a bubble on the tide of empire. It is where you go when you hear that thar’s gold in them-thar hills. It is where you go to grow up with the country. It is where you go to spend your old age. Or it is just where you go.
The second day I was in Texas. I was traveling through the part where the flat-footed, bilious frog-sticker-toting Baptist biscuit-eaters live. Then I was traveling through the part where the crook-legged, high-heeled, gun-wearing, spick-killing, callous-rumped sons of the range live and crowd the drugstore on Saturday night and then all go round the corner to see episode three of “Vengeance on Vinegar Creek,” starring Gene Autry as Borax Pete.
I had seen three hangings and one electrocution, but they are different. In a hanging you do not change a man’s personality. You just change the length of his neck and give him a quizzical expression, and in an electrocution you just cook some bouncing meat in a wholesale lot.
I tried to tell her how if you could not accept the past and its burden there was no future, for without one there cannot be the other, and how if you could accept the past you might hope for the future, for only out of the past can you make the future.

Film Rendition:  There is a 2006 version but it didn’t receive great reviews so I passed. The 1949 version however won the Academy Award for Best Picture, Best Actor (Broderick Crawford), and Best Actress in Supporting Role (Mercedes McCambridge). It also received four other nominations. So, it should go without saying it’s very good.