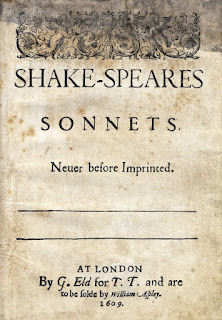 Shakespeare’s Sonnets is a collection of 154 – you guessed it – sonnets. The first 126 are written to a young man, the final 28 to a woman.

In my opinion, a discussion of Shakespeare’s Sonnets should involve three topics: the poetry, the mysterious persons who are the subjects, and what the sonnets reveal about one of the greatest writers in history.

The Poetry: Although I write a little poetry myself, I am hardly qualified to comment. But nonetheless…
What is a sonnet? Typically it is a poem of 14 lines, written in iambic pentameter, and consisting of 3 quatrains and one couplet. Believe it or not, I know what that means. Iambic just means legs (typically an unstressed syllable, followed by a  stressed syllable). Pentameter means a five part meter (per line). So, iambic pentameter is five legs (pairs) of syllables per line: da DA, da DA, da DA, da Da, da Da. A quatrain is four lines wherein the first and third lines, and the second and fourth lines rhyme. There are three such quatrains followed by a couplet: two lines, still in iambic pentameter that rhyme.

I’m going to risk embarrassing myself and attempt a spontaneous composition of a quatrain and couplet (not an entire sonnet) right now, just as I’m writing…here goes.

Doggerel really, but that’s a quatrain + couplet in iambic pentameter. A typical sonnet, would have two more quatrains. There are variations...but that's the traditional arrangement.

Which still says nothing of the quality of the poetry. Well, even though I gave only one and one-half stars to what is supposedly one of the greatest novels ever – I’m not about to say Shakespeare can’t write poetry. From a technical aspect alone the sonnets are impressive. Written in early modern English, they take a little work to understand and appreciate. I’d have been lost without help from SparkNotes. But after reading a couple dozen with the help, I could actually get most of what the Bard was saying without them. I still used the notes to ensure I got the full gist. Besides the technical competence, there is some lovely turn of phrase and some lovely sentiment, but also some rather disturbing, or at the very least confusing sentiment.

The subjects. Both the young man, and the mysterious dark woman are enigmas. There is much speculation of who they might have been, but no one knows for sure. There is also mystery over the dedication to Mr. WH; I suspect it is the young man of sonnets, but again, we don't know for certain.

What can we learn about William Shakespeare? Very little for certain, because there is further mystery. The first 126 sonnets are to a beautiful young man whom the poet loves and admires. Some believe this indicates Shakespeare was gay or bisexual, but that is far from conclusive. First, it is possible that Shakespeare was writing poetic fiction – not his sentiments at all, just a fictional narrator. Personally, I doubt this premise, but it is still possible. Secondly, the language is loving, adoring, admiring, but not usually sensual. It is possible that it was platonic love. Initially, I doubted this premise; the writer is just so over the top adoring of the young man, but when I got the last 28 sonnets that are definitely to a different person, and a woman, they are quite sensual, sexual, and bawdy. There was definite sexual attraction there, and if he chose to reveal it in the poems for this woman, why not earlier to the young man, unless it wasn’t sexual.

The final 28 sonnets do reveal something about Shakespeare. These express both sexual and emotional love for the subject – a dark mysterious woman, who was not particularly beautiful, but nonetheless adored by the narrator. In this case I believe it was Shakespeare’s own sentiment. He makes frequent wordplay with his own name Will. He identifies himself as Will, but also uses this as a bawdy phallic reference.

But I’m straying from the real point. I don’t delve too deeply into the personal lives of the novelists I read. If I do, it has little bearing on whether I enjoy their writing.