Macbeth is a tragedy by Shakespeare. The date of writing is unknown; the first performance is believed to have been 1603. It is set in late 16th Century Scotland.

The title character is a general in the Scottish army, and has just returned from an important victory to the great favor and generosity of King Duncan.
So that’s a happy beginning (unless you are Irish), but this is a tragedy – and things go south pretty quick. Macbeth encounters three witches who prophesy that he will be given a new title, and then become King. Fellow General Banquo also receives a prophesy that though he himself shall not be king, there would be many kings amongst his descendants. 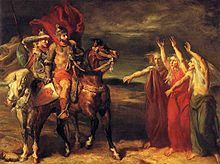 Macbeth , Banquo, and the witches
by Theodore Chasseriau


Macbeth does not take the prophecy seriously until King Duncan rewards him with a new title. Still everything is pretty happy, but now that he’s beginning to believe the prophecy, Macbeth tells Lady Macbeth and things just get – well – in a word – tragic.

Macbeth and Lady Macbeth take proactive steps to bring the prophesy about. One act of villainy and betrayal leads to another, and another, and more.

False face must hide what the false heart doth know

The guilt of treachery begins to trouble Macbeth, that and the ghost of one of his recently betrayed friends. Lady Macbeth is at first pretty aloof to any remorse, but later she is driven mad by guilt.

It doesn’t turn out well for either of them, as their growing group of victims join forces to, determined to…

Let’s make us medicines of our great revenge

In some ways, Macbeth is less tragic than some of Shakespeare’s tragedies. There is justice in the end, and some brilliant ironic twists. Those meddlesome witches, give Macbeth a few more prophecies that made him think he was invincible – but that in fact signaled his doom.

As with any work of Shakespeare, Macbeth contains phrases that are now part of English vernacular:

…be all and end all
…what’s done is done
And not really English vernacular, but this phrase, that Lady Macbeth utters to Macbeth…screw your courage to the sticking place…is quoted in Disney’s Beauty and the Beast.

There are also lines from Macbeth, that other authors would later use as the title of their works.

One of the witches chants: By the pricking of my thumbs, Something wicked this way comes. (Something Wicked This Way Comes is the title of a Ray Bradbury story).

And finally, from Macbeth’s soliloquy:
Life’s but a walking shadow; a poor player,
That struts and frets his hour upon the stage,
And then is heard no more; it is a tale
Told by an idiot, full of sound and fury,
Signifying nothing
(The Sound and the Fury is the title of a William Faulkner novel)