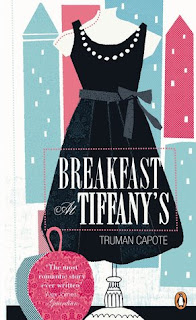 "Be anything but a coward, a pretender, an emotional crook, a whore: I’d rather have cancer than a dishonest heart." ~ Holly Golightly

Breakfast at Tiffany’s is the story of a simple country girl, turned New York café socialite and climber, early 1940s – with one of the best names in literature – Holly Golightly (born, Lulamae Barnes). When the narrator first reflects on his memories of Holly,

I didn’t care for her. She was vain, fickle, materialistic, manipulative, and ambitious. Somehow, perhaps by those very characteristics, I thought at first, she was a stereotypical “dizzy blonde”.

She was intelligent, informed, witty, and tough. In one instance, the narrator who was infatuated and often vexed with Holly, jabs her with a very subtle insult to her intelligence. She responds coolly…

“Everybody has to feel superior to somebody,” she said. “But it’s customary to present a little proof before you take the privilege.”

Holly is likeable in the same way that Scarlett O’Hara or Becky Sharp are likeable. She is nobody’s fool, bold, and relentless – in spite of inner fear, doubt, and vulnerability.

She holds no job, but rather depends on the generosity of wealthy men – though she is not a prostitute. Capote called her: "An American geisha".

She is probably a fictional composite of numerous people: the author himself, his mother, and others. Numerous starlets have claimed they were the inspiration – only natural – if Audrey Hepburn plays the role, others will flatter themselves it was based on themselves.

This novel satisfies – Back to the Classics Challenge 2018 – Category: a 20thCentury classic.

This is the first time I’ve read Breakfast at Tiffany’s or Truman Capote. I am instantly a fan of Capote’s writing. He writes in simple prose, but with earthy and accessible color.

The walls were stucco, and a color rather like tobacco-spit.

Capote uses a good deal of symbolism. The most poignant being an elaborate birdcage that Holly and the narrator both admire. Holly buys it for him one Christmas, but demands that he never keep a bird in it. The empty birdcage seems to represent Holly’s desire to be free and uninhibited.

The story was captivating, but I wanted more. I’m sure the lack of precise closure to Holly’s story was intentional, but not a device I’m fond of – hence 4 stars, that could easily have been 4 ½. I wanted to know what became of Holly. Have you read this novella, Truman Capote? What did you think?

I simply trained myself to like older men, and it was the smartest thing I ever did. How old is W. Somerset Maugham?

“Let’s wish the Doc luck too,” she said, touching her glass against mine. “Good luck: and believe me, dearest doc – it’s better to look at the sky than live there. Just a country where the thunder goes and things disappear.”

And finally, a bit of trivia.  Did you know that Truman Capote was a childhood friend of Harper Lee? And that the character Dill from To Kill a Mockingbird is modeled after Capote?.


Film rendition: 1961 starring...is it really necessary to say it...Audrey Hepburn.  If you are prepared in advance that it is quite different from the book, it might be OK. Hepburn definitely owned the role.