The Magi honored the Christ child with three gifts. 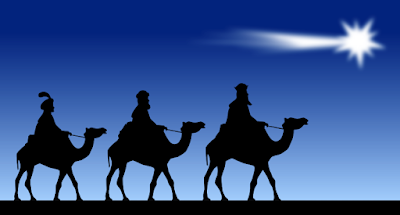 and in honor of the magi, I read three Christmas tales each December. My Christmas reads are also part of A Literary Christmas – sponsored by In The Bookcase. 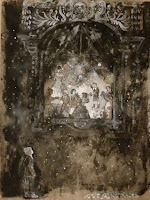 In the opening lines, Dostoevsky relates…

What follows is a bittersweet tale of an orphaned boy – though he does not know he is an orphan. His mother died only some few hours before the story opens. The boy, about six, is cold, and hungry, and lost, and alone on Christmas Eve in a large city where he finds no compassion. His misery is compounded by the glorious visions of warmth and plenty that he views through windows of shops and homes of the great city – but there is no room for the unwanted beggar. Cruel mercy – cold and hunger – usher the boy into the presence of one who understands what it is to find no welcome on a winter night.

Next, a short story by British author Charles Dickens. You are expecting maybe A Christmas Carol? – nope. Certainly then, The Cricket on the Hearth or The Chimes? – nope, and nope. Ever heard of The Signal Man? Me neither. Well, it isn’t truly a Christmas story. Christmas, the Holidays, nor winter are ever mentioned in the story. The only connection to Christmas is the story was first published in the Christmas Edition of Dickens’ weekly magazine All the Year Round. It is the story of a content and humble railroad signalman, who recently received visitations by a specter – an omen of doom. On two occasions the specter, a signalman himself, appears to give warning, and shortly thereafter tragedy strikes. The mortal signalman is at a loss as to what to do. He cannot telegraph WARNING down the line without details or explanation. He is further unsettled when the specter appears a third time.

His pain of mind was most pitiable to see. It was the mental torture of a conscientious man, oppressed beyond endurance by an unintelligible responsibility involving life.

As you can imagine, the third visitation is not without purpose – but I’ll spare the spoiler and let you enjoy The Signalman when you are in the mood for what Andy Williams called scary ghost stories of Christmases long long ago. 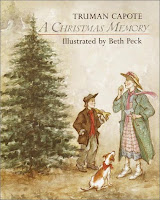 And finally, A Christmas Memory by American author Truman Capote. Surprisingly, this was my favorite of the three. It is a sweet and tender tale of friendship. The narrator recalls his best friend, his only friend, from childhood – a distant cousin more than half-a-century his senior. The two are somehow, second class residents in the home where they live.

Other people inhabit the house, relatives; and though they have power over us, and frequently make us cry, we are not, on the whole, too much aware of them.

The two make fruitcake every Christmas, scrimping all year to save for the ingredients. They send the fruitcakes to near strangers who have been kind to them, like the giant Indian bootlegger from whom they buy whiskey – a key ingredient.

“Tell you what,” he proposes, pouring the money back into our bead purse, “just send me one of them fruitcakes instead.”

The poor souls, they barely knew they were poor.