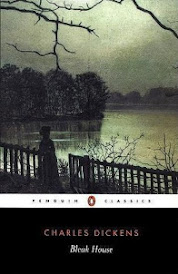 Bleak House is the story of Esther Summerson, though very early in the narrative, Esther asserts it is not about her.

Well, that’s just like Esther: unassuming and humble. Nonetheless, it is about her. Esther is a beautiful young woman – could a Dickens heroine be anything but? Indeed yes, because smallpox disfigures Esther’s face, and yet I stand by my opinion that she is beautiful.


In fact, I have read some who dislike Esther for being too virtuous, too saintly, too good to be true. I don’t quite get that. I liked her in spite of her virtue and sincerity.

And she wasn’t even the saintliest person in the story. That distinction goes to Esther’s guardian John Jarndyce, whom Vladimir Nabokov described as

one of the best and kindest human beings ever described in a novel.

I found Jarndyce likeable as well in spite of his annoying niceness.


I might have given a hint to one of the surprising aspects of this novel. Contrary to what I expect from Dickens. There was no heartbreaking dilemma. There was no forlorn orphan – though Esther was an orphan, but never forlorn, and not always truly an orphan, though later truly. There were no heinous villains - minor villains only, no gross injustice – just minor inequities in English chancery law (that this novel is sometimes credited with changing).


But there is the old familiar Dickens’ hallmark of serendipitous coincidence which intertwines the mysteries of Esther’s birth and fortunes with numerous other subplots.


In another departure, Bleak House is the only Dickens story with a female narrator. The narrative switches between Esther’s first-person narration, and an omniscient narrator.


Bleak House, the abode of John Jarndyce, in spite of its name is a pleasant, homey place, as Esther describes:

…one of those delightfully irregular houses where you go up and down steps out of one room into another, and where you come upon more rooms when you think you have seen all there are, and where there is a bountiful provision of little halls and passages, and where you find still older cottage-rooms in unexpected places with lattice windows and green growth pressing through them.


In one final departure from the normal Dickens motif, not all of the plots or subplots turn out to the perfect satisfaction of the reader. For me – that works. Sometimes I like Dickens’ perfect poetic justice. At others, I like a little harsh reality (never too harsh from Dickens though – that just wouldn’t be right).


And last I come to this. There are some, many in fact, who say this is Dickens’ finest work, among them are George Gissing, G. K. Chesterton, and Stephen King who lists it among his 10 favorite novels by any author. Me? But not so for me. I liked it very much, but I still put A Tale of Two Cities at #1, and give a slight edge to David Copperfield over Bleak House.