David Copperfield by Charles Dickens (50 down 50 to go) 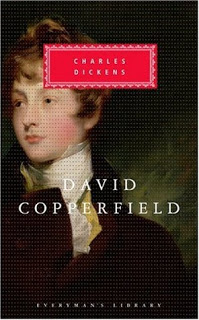 …there never were greed and cunning in the world yet, that did not do too much and overreach themselves. It is as certain as death. ~ David Copperfield

This is the second time I’ve read David Copperfield, the first being at least ten years ago. And I've read other works by Dickens. David Copperfield is a Victorian era novel with themes of romance, social justice, and prejudice particularly against children, women, and the poor. It was originally published serially, and the anticipation of each new installment resulted in long lines at the newsstands. It is the first person narrative of David Copperfield and is a Künstlerroman.

This novel satisfies square I5 of 2015 Classics BINGO: Published between 1850-1899, thus completing my first BINGO: the I column. My goal is to complete the entire BINGO board however, so I’m only a little more than half way done.

It was a fitting novel for number 50, which I’m glad was something momentous. This review will be longer than most, not because it is 50 (I’ll recap the first 50 novels in a few days), but because it is such a magnificent story.

I loved David Copperfield, which is considered Dickens' greatest novel. My opinion definitely improved with the second reading. I liked it very much the first time, but always felt A Tale of Two Cities was Dickens' best. I still feel that way, but as I say, my opinion of David Copperfield is improved and I’m less bothered by the distinction.

I think two of the main reasons it is considered Dickens’ best are: that Dickens himself considered David Copperfield his best work, or at least his favorite, and it is somewhat autobiographical. The character David Copperfield eventually becomes an author and near the end of the story reminisces, (or is it Dickens reminiscing?):

When my thoughts go back now to that slow agony of my youth, I wonder how much of the histories I invented for such people hangs like a mist of fancy over well-remembered facts! When I tread the old ground, I do not wonder that I seem to see and pity, going on before me, an innocent romantic boy, making his imaginative world out of such strange experiences and sordid things.

Without synopsizing, I’ll say that the novel has just about everything of the Dickens’ hallmark: poor orphan boy, unjustly denied his place in the world, who rises against the odds and sees justice done without malice, as well as comical and sinister caricatures (another of Dickens’ stamp). There is tragedy, comedy, misguided love, pure love, mystery, betrayal, intrigue, shame, reclamation, stolen fortunes, reclaimed fortunes, donkeys, and heroes.

If you’ve read some of my early reviews, you know I like a novel with a hero. This story has numerous heroes, including some unlikely ones. The heroes include: Clara Pegotty, Aunt Betsey Trotwood, Tommy Traddles, Mister Dick, Mister Micawber, Ham Pegotty, Daniel Pegotty, Martha, and of course David.

Below is an illustration from my 1991 Everyman's Library edition. The picture is David meeting with Mr. Peggoty. The illustration is titled: The Wanderer (couldn't resist) 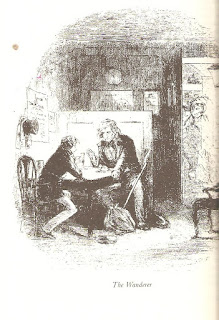 As I’ve indicated, I don’t want to synopsize, but there are two magnificent contrasts in the story that I’ll touch on briefly.

David makes many friends along his life’s journey. Two of his closest are from school days: James Steerforth and Tommy Traddles. James is bright, handsome, charming, quick witted, and from a privileged family. Tommy has none of James’ advantages, but he is steadfast, faithful, loyal, and – I’ve already told you – one of the heroes. I doubt most readers would consider James a villain, but he breaks the heart of everyone close to him – everyone! David never forsakes his love for James, which is a testimony to David’s faithfulness, not James’.

The other contrast: David’s two great loves: Dora and Agnes. He has several other loves, but they are mere infatuations. David is a bit like Augie March from my last novel, in that he falls in love quite easily; but I digress. Dora is beautiful, by all accounts the most beautiful woman in the story. Woman is a generous term though, she is truly just a girl, and a rather simple one. Don’t misunderstand me; she is sweet and good, not terribly vain or materialistic, she knows she is a silly childish girl, powerless to change, and she genuinely loves David. Before David or the reader, ever meets Dora though, they both come to love Agnes; David’s love for Agnes is brotherly however. The reader wants to smack some sense into him. Agnes is only slightly less beautiful than Dora, but she is infinitely superior in every other aspect. She loves David with a pure, sacrificial, and unconditional love. She is clearly David’s perfect match. Ordinarily fairly bright, David somehow misses this. Dora’s beauty would seem the obvious beguilement, but David knows and loves Agnes, only as a sister, long before he meets Dora.

I said this book improved with the second reading. There is a good deal of foreshadowing that I didn’t catch the first time, because I didn’t know how things turned out. Quite a bit of the foreshadowing is regarding David’s misplaced love for Dora.

Upon leaving Agnes after a delightful day in her company David recounts:

There was a beggar in the street, when I went down; and as I turned my head towards the window, thinking of her calm, seraphic eyes [Agnes], he made me start my muttering, as if he were an echo of the morning:  – “Blind! Blind! Blind!”

David’s Aunt Betsey, refuses to meddle in his love life, but also relates that she thinks he is blind.

A sub-plot in the book involves a beloved teacher of David’s, Dr. Strong and his much younger wife. A sinister person in the story sows discord between Dr. and Mrs. Strong, by raising suspicion of Mrs. Strong’s fidelity. There was no infidelity, but the traces of a childhood infatuation made it appear so. When the two are wonderfully reconciled, Mrs. Strong says two things that resonate with David:

There can be no disparity in marriage like unsuitability of mind and purpose.

She then describes her childhood infatuation as:

...the first mistaken impulse of an undisciplined heart.

In a final Dickens hallmark, nearly everything turns out wonderfully. Dickens has been criticized for this, and I get that. I wouldn’t want every story to end “happily ever after”. Art would be a poor imitation of life if they did. But I do like some to end well; Dickens is a master of the satisfying ending.

David considering his reflection after drinking too much:

I was very pale in the looking-glass; my eyes had a vacant appearance; and my hair – only my hair and nothing else – looked drunk.

Lovers had loved before, and lovers would love again; but no lover had ever loved, might, could, would, or should ever love, as I loved Dora. ~ David

I particularly mention this, after what Jerome K. Jerome said on the subject of Loving as no one has loved before:

it’s really extraordinary what a variety of ways of loving there must be. We all do it as it was never done before. I don’t know how our great-grandchildren will manage. They will have to do it on their heads by their time if they persist in not clashing with any previous method.

We talk about the tyranny of words, but we like to tyrannise over them too; we are fond of having a large superfluous establishment of words to wait upon us on great occasions; we think it looks important, and sounds well. As we are not particular about the meaning of our liveries on state occasions, if they be but fine and numerous enough, so the meaning or necessity of our words is a secondary consideration, if there be but a great parade of them. And as individuals get into trouble by making too great a show of liveries, or as slaves when they are too numerous rise against their masters, so I think I could mention a nation that has got into many great difficulties and will get into many greater, from maintaining too large a retinue of words. ~ David

When I find what you are, and what uncle is, I think what God must be, and can cry to him. ~ A friend, to David in a letter

References to other great literature:

Film Rendition: 1999 BBC version starring Daniel Radcliffe as young David, several of his costars from the Harry Potter franchise, and Ciaran McMenamin as adult David. This was a pretty fair rendition, for a three-hour made for TV movie. When looking for film renditions of Victorian novels go with BBC or British productions.