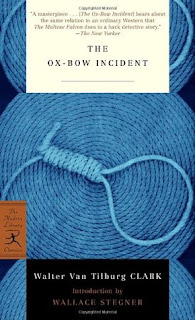 If I had to describe The Ox-Bow Incident in one word, it would be poignant.

Or maybe just Wow! It kept me up all night after I’d finished. It is disturbing and beautiful.

The Ox-Bow Incident must be categorized as a Western, but it transcends the genre.

The story is told by Art Croft, who rides with Gil Carter and is set in late 19th Century Nevada, it is the story of a lynching – a lynching of innocents, by men most of whom, on most days – were pretty decent guys. These decent guys include Art and Gil.

…there was something about him [Kincaid] which made men cotton to him; nothing he did or said, but a gentle, permanent reality that was in him like his bones or his heart, that made him seem like an everlasting part of things.

The sheriff is away so the cowboys form a posse, not quite lawfully deputized, and set out in pursuit of the murderers. There are three dissenters: judge Tyler, preacher Osgood, and shopkeeper Davies. Tyler makes legal arguments and Osgood moral ones – neither are taken seriously. But the author, and some of the cowboys, give greater credence to Davies, who makes more pragmatic, more existential arguments.

…our crime’s worse than a murderer’s. His act puts him outside the law, but keeps the law intact. Ours would weaken the law.

There is much more to Davies’ argument, and a few of the cowboys, Art in particular, are nearly persuaded. In the middle of one argument Davies stops abruptly. I liked how Clark, through narrator Art describes that moment.

He stopped, not as if he had finished, but as if he suddenly saw he was wasting something precious.

The mob finds the rustlers, makes a mockery of a trial, convicts the men and executes them at dawn.

Less than an hour later as they are riding back to town the mob meets the sheriff, the rancher who was supposedly rustled, and most incredibly Kincaid the cowboy who was supposedly murdered. The lynch victims are no murderers, nor even rustlers. But all that is left of them now is a widow and two children. All that is left for the mob is to atone.

Did I describe this novel as beautiful? I’m almost ashamed to say it, but yeah. It is tragically, powerfully, disturbingly beautiful.

I define greatness in a novel as one that evokes exalted thought or powerful emotions – it did both. Have you read The Ox-Bow Incident? What did you think? Could you ever describe something so tragic as beautiful?

This novel satisfies A 20th Century Classic for the Back to the Classics 2019 challenge.

Film rendition: The 1942 rendition with Henry Fonda as Gil and Harry Morgan as Art is very good, fairly faithful to the book, until the end, and just as disturbing. I often say skip the movie, read the book, but for this one, I’d say read it first, then watch the movie.