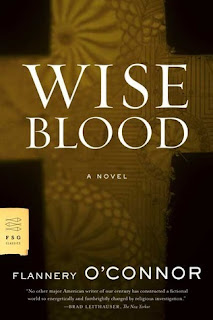 I didn’t love it, and to be honest, I’m never quite certain of O’Connor’s point. It’s the story of Hazel Motes, a WWII veteran returning to the dirty south, who is in the process of exorcising his disillusioned faith. He becomes, partly by accident, partly by design, an itinerant preacher of The Church without Christ. Like many of O’Connor’s characters Hazel is ignorant – but not simple. And also like most of O’Connor’s characters, he tries to make those around him understand him – but he can’t.

And perhaps that’s her point. We all want to be understood, and we think we make our case so plain, but people just don’t get it. True empathy is pretty rare. We look at others through the lens of our own experience – because how else can we do it – but that lens never gives a complete or accurate view.

O’Connor writes about such challenges. The story is poignant, and sad.

And though I’m not a big fan of the story, I like O’Connor’s writing. She uses unconventional, though easily accessible, descriptors that make the characters and scenes very real…

His face behind the windshield was sour and frog-like; it looked as if it had a shout closed up in it…

The patrolman had a red pleasant face and eyes the color of clear fresh ice.

She writes of a "rat-colored car" or a "cat-faced baby".

This novel satisfies A Classic by a Woman Author for the Back to the Classics 2019 challenge.